One more diversionary post before I delve into why the Administration is so worried about releasing a short phrase that, I suspect, acknowledges that George Bush’s September 17, 2001 Memorandum of Notification authorized the torture program.

I want to reflect on what it means that then-National Security Advisor Jim Jones submitted a declaration–sometime in Fall 2009–to keep this short phrase hidden. The government revealed that, though without hinting at what Jones had to say, in the October 29, 2009 closed hearing with Judge Alvin Hellerstein.

AUSA Sean Lane then goes on to make clear that Jones’ declaration argues why Hellerstein should withhold the few word acknowledgment that the Memorandum of Notification authorized the torture program.

THE COURT: Both [Jones’ declaration and a second sealed one from CIA Associate Information Review Office Wendy Hilton] support the argument for maintenance of the redactions.
MR. LANE: Correct, your Honor. They both address what the government ties been calling “the Intelligence method” withheld from the two OLC memos, and the Court has been referring to as “The source of the CIA’s authority.”

So it’s not just that–as I inaccurately suggested the other day–that the CIA is trying to keep this short phrase noting that the President authorized the torture program secret. The National Security Advisor–for all intents and purposes, the President himself–is going to some lengths to keep that phrase secret as well.

Now, it is rather unusual for an NSA to submit a declaration like this (a rather telling exception to this rule came when NSA Brent Scowcroft submitted one in the original Glomar case, though that was not sealed, as this one is). Usually, it’s Information Security Officers like Hilton or–when they need the really big guns–the head of the Agency that controls the information in question. Leon Panetta, for example, submitted a declaration in this case, in which he stated,

I also want to emphasize that my determinations expressed above, and in my classified declaration, are in no way driven by a desire to prevent embarrassment for the U.S. Government or the CIA, or to suppress evidence of unlawful conduct,

But such declarations are almost always submitted by an Agency head–that is, someone outside of the White House. Yet here, the White House is sufficiently determined to keep this very short phrase secret that they had the NSA write a declaration on top of what Panetta had already written.

NSA Jones’ declaration may indicate that the National Security Council has more ownership over this program than we’ve understood.

We’ve already seen hints of that in the way the program was made a Special Access Program. In her January 5, 2007 declaration supporting the withholding of the September 17, 2001 MON I believe is at issue in this case, CIA Information Review Officer Marilyn Dorn claimed the NSC told CIA to make the torture program a SAP.

In accordance with the NSC’s direction to the CIA to establish a special access program for information relating to the CIA terrorist detention and interrogation program, the CIA is charged with strictly controlling access to the information contained in the [MON].

Leon Panetta offered a slightly different version of what happened in his June 8, 2009 declaration.

Section 6.1(kk) of the Executive Order defines a “special access program” as “a program established for a special class of classified information that imposes safeguarding and access requirements that exceed those normally required for information at the same classification level.” Section 4.5 of the Order specifies the U.S. Government officials who may create a special access program. This section further provides that for special access programs pertaining to intelligence activities (including special activities, but not including military operations, strategic, and tactical programs), or intelligence sources or methods, this function shall be exercised by the Director of the CIA.

So in 2007, while Bush was still in office, the CIA said NSC told CIA to make the torture program a SAP, and CIA obeyed. In 2009, when Obama was in office, the CIA said that “NSC officials” actually made the SAP, not the CIA. And Panetta provided that explanation after acknowledging that the CIA Director is the one who is supposed to make SAPs for intelligence programs.

There’s one more curious detail about this, which I laid out here. It at least appears that the torture program wasn’t treated as a SAP when first initiated in 2002. We know, for example, that the cables from the Thai black site back to Langley were originally classified Secret, and only classified Top Secret in 2009, when the ACLU started FOIAing it. Best as I can tell, those discussing the torture tapes were doing so in cables classified Secret as late as December 20, 2002 (see PDF 20; there are, however, some cables from earlier that were later forwarded under Top Secret designation), with the first document reflecting a compartment dated January 9, 2003 (see PDF 24).

More intriguing is a comparison of the Bybee Techniques memo, which has no compartment markings… 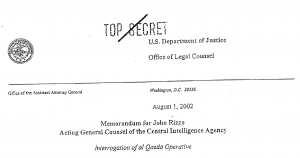 … with the George Tenet memo at issue in this dispute. That one does appear to have compartment information to the right of the Top Secret mark. 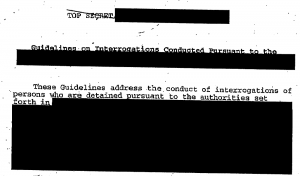 Mind you, we know that only a very limited set of people had access to what was really going on. And at least according to John Kiriakou, the CIA was telling a false story even to people within the Agency (which is why he claimed waterboarding worked so well).

In other words, the folks involved in the torture program were treating it like a compartment, but it appears not to have formally been one yet. And, as least as Leon Panetta tells the story, the NSC–not the CIA–made it a SAP.

There’s one more detail about Jim Jones’ declaration of note. His declaration was never formally noticed in the FOIA suit docket. Best as I can tell, the first public notice of it came when Hellerstein released his ruling requiring the government to release either substitutions or the actual language in the phrase; in it, he described referring to the Jones and Hilton declarations. In that order, Hellerstein rejected the government’s attempts to keep the language about the authorization for torture secret, requiring either that the language itself be revealed or substitute language he provided.

On January 15, ACLU moved to reconsider Hellerstein’s order. They didn’t have a problem with his requirement that the government release the information on the authorization for torture. They just wanted more released. But during the period of that reconsideration, the government stalled on complying with Hellerstein’s order to release the information pertaining to the authorization of the torture program, as follows:

February 17, 2010: Lane asks Hellerstein to stay his order regarding the authorization language until he decides the ACLU’s motion to reconsider

March 1-3, 2010: Hilton submits a new declaration regarding the authorization language, claiming new factual developments in the case; US Attorney Preet Bharara also submitted a letter urging Hellerstein to reconsider his ruling in light of the new facts

Faced with an order to release language describing the authorization for the torture program, the CIA found new factual developments to urge Hellerstein not to release a very short phrase describing who or what authorized the torture program. Ultimately, Hellerstein found that new information unpersuasive, and–after a several month delay period requested by the government–on October 1, 2010, ordered them to release the language, with a stay pending appeal.

Now, I’m not suggesting that the government invented new facts to try to get this short phrase redacted. On the contrary, I suspect the new factual developments made the ultimate authorization for the torture program–particularly that torture which preceded the August 1, 2002 Bybee memos–far more problematic. On February 10, 2010, the British government published this language:

It was reported that a new series of interviews was conducted by the United States authorities prior to 17 May 2002 as part of a new strategy designed by an expert interviewer.

v) It was reported that at some stage during that further interview process by the United States authorities, [Binyam Mohamed] had been intentionally subjected to continuous sleep deprivation. The effects of the sleep deprivation were carefully observed.

vi) It was reported that combined with the sleep deprivation, threats and inducements were made to him. His fears of being removed from United States custody and “disappearing” were played upon.

Mind you, the British High Court first made it clear to the British government it intended to release that language on October 26, 2009, just around the time Jim Jones was submitting a very rare NSA declaration in support of a FOIA exemption.

Now, I think Obama’s unwillingness to release proof that President Bush authorized the torture program, particularly that torture that took place–as some of Mohamed’s did–before the Bybee declarations gave them OLC cover, may be just one of the reasons why the Administration is going to such lengths to keep this short phrase redacted.

But I do think it a significant one.