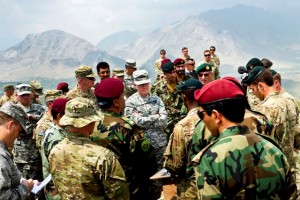 As I noted just under two weeks ago, NATO used the occasion of the Taliban attacks across Afghanistan on April 15 to enhance the image of Afghan troops and emphasize the role that they played in ending the attacks. This followed only a week after the US and Afghanistan signed an agreement on night raids, putting Afghan special forces in charge of  night raids, with US forces playing a “support role”.

Although the agreement on night raids was one of the first times Afghan special forces entered the news, it appears that their training began about two years ago. Earlier this week, Joint Chiefs Chair General Martin Dempsey visited the training facility for Afghan special forces and posed for the photo above. He talked glowingly:

“I spent the better part of the day with the [Afghan] commandos and special forces and my counterpart, General [Sher Mohammad] Karimi, just to get their sense of how they feel about themselves,” the chairman said, noting that he also talked with the U.S. service members who mentor them. “I was encouraged on a couple of fronts.

“Their self-esteem is increasing,” he continued. “They’re very proud. They’ve got not only a good equipping and training model, but they’re building in a sense of purpose and values to the force … That part of the force is part of it that I hadn’t really confronted before, and I found it to be very capable, and, I think, moving apace to become a very important part of their security apparatus.”

The visit by Dempsey and his glowing statement about Afghan special forces now appears to have been very ill-timed:

An elite Afghan soldier shot dead an American mentor and his translator at a U.S. base, Afghan officials said on Friday, in the first rogue shooting blamed on the country’s new and closely vetted special forces.

The soldier opened fire at an American military base on Wednesday in Shah Wali Kot district, in volatile Kandahar province, said General Abdul Hamid, the commander of Afghan army forces in the Taliban’s southern heartland.

In discussing the increasing frequency of these green on blue killings, NATO until now has taken the attitude that they are “isolated incidents” while dong their best to ignore the study (pdf) released last May, and then retroactively classified, which detailed the cultural incompatibilities that lead to the killings. In response to this latest incident of fratricide, however, NATO’s response is changing. Returning to the Reuters article:

But NATO commanders argue the growing number of shootings is in proportion to the growing size of Afghan security forces towards an eventual 352,000 target.

“When we analyze the problem, it occurs for a number of reasons, and not as many as you would expect show any evidence of insurgent initiation, or insurgent backing,” a senior NATO official who could not be identified said last week.

“Quite often people resolve their personal problems by resorting to the use of a weapon. It’s more of a cultural thing here.”

While the claim that the shootings are growing in proportion with the growth of Afghan forces is hardly reassuring, it is admirable that the word “cultural” finally shows up in what appears to be a grudging, indirect acknowledgement of last year’s report. However, stating that Afghans resort to the use of a weapon as a way of solving a personal problem feeds more into the cultural incompatibilities described by the report than it moves toward finding a common ground.

Interestingly, the concept of cultural differences also appears in the Army Times article cited above where we first learned that Afghan special forces were being trained:

From the perspective of the U.S. trainers, the toughest challenges involved closing the cultural gap that existed between the officer candidates and the sergeants so that they could work closely together. The ANA still suffers from a Soviet-style mindset that discourages initiative on the part of noncommissioned officers and leads officers to adopt an elitist attitude. At first, officer candidates in the course didn’t want to live with or even stand in formation beside their NCOs, the U.S. A-team leader said. Ten officers — all members of the Pashtun ethnic group — dropped from the course because they couldn’t cope with what the Americans were pushing them to do, he said.

But by borrowing the U.S. Special Forces qualification course tactic of stripping all identifying insignia away from the candidates and referring to them only by a serial number for the first few weeks of the course, eventually the U.S. trainers were able to break down this attitude. Now, “if one of my guys gets sick, it’s as if one of my own arms hurts,” the Afghan A-team leader said. Having gotten the officers to view their NCOs with greater respect, the U.S. trainers then had to teach the sergeants to make decisions for themselves without waiting for an officer to give them an order.

The fact that a graduate of the extra, intense training involved in certifying Afghan special forces still engaged in fratricide suggests that although there is some acknowledgement of cultural differences in developing the training program, those differences that feed into green on blue killings are not being addressed.