Is Obama Worried that Fat Al Gore’s Drought Will Threaten His Reelection? 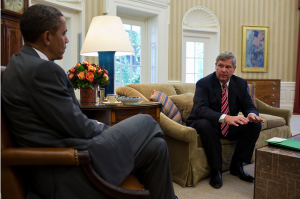 I’m beginning to wonder whether Obama is worried the drought–particularly in the Midwest–could imperil his reelection campaign. I say that because he seems to be avoiding addressing it on the campaign trail. (Compare that to the way he has addressed other tragedies, such as his well-received conversations with the victims of the Aurora shooting.)

To the best of my knowledge, this July 18 photo is as close as Obama has gotten to publicly expressing concern about the drought. And in a press briefing on the drought the same day, both participants–Tom Vilsack and Jay Carney–avoided addressing questions about whether Obama would visit drought affected areas.

Q Secretary, should we be expecting that you and the President will be heading to a drought-stricken area soon? That’s normally a path that you take when you’re trying to show something is a priority.

SECRETARY VILSACK: Well, I can’t speak obviously for the President’s schedule, but I can tell you that actually I was in Pennsylvania yesterday. We do have the Deputy Secretary going to Georgia tomorrow. We’ve got the Under Secretary of the Farm Service Association traveling to several states that are drought-impacted and affected.

Q Is the President going, Jay, to go anywhere —

MR. CARNEY: I don’t have any scheduling updates for the President to provide to you today. If and when I do, I’ll provide them.

Now, I’m not trying to concern troll about the President’s schedule, in the way Republicans are criticizing Obama for not meeting with his Jobs Council. Nor am I saying Obama’s not responding to the drought; the USDA has been making low-cost loans available to those in areas declared a disaster, as well as certain other things that may provide immediate if not long-term relief.

Rather, I’m raising it because I really do think it might affect the election. Consider how many swing states are affected by the drought (conditions have gotten better in MI of late). 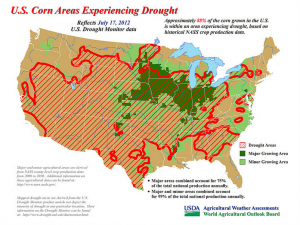 And while IA has not been included among the counties in which Vilsack has declared a disaster, its corn harvest has been affected (with 40% deemed poor or very poor on July 22). And their livestock will be affected as well.

All that’s before food prices go up in time for the election. Vilsack seemed to try to insulate the Administration from responsibility for that in the same July 18 press conference.

The question that a lot of folks are asking is what will the impact be on food prices. Because livestock producers will begin the process of potentially reducing their herds in light of higher feed costs, we would anticipate in the short term actually food prices for beef, poultry, pork may go down a bit, but over time they will rise. We will probably see those higher prices later this year, first part of next year. Processed foods obviously impacted by crop yields, and we will likely see the increase of that also in 2013.

It’s important to note that farmers only receive 14 cents of every food dollar that goes through the grocery store, so even though prices on commodities increase significantly, it doesn’t necessarily translate into large increases for food prices. And if, in fact, people are beginning to see food price increases now, it is not in any way, shape, or form, related to the drought. And we should be very careful to keep an eye on that to make sure that people do not take advantage of a very difficult and painful situation.

Though he didn’t address speculation–which drove up prices in 2008 and which the Administration has not done enough to fix.

The whole thing reminds me how a year ago the President wouldn’t brag about the auto bailout (because it did not yet poll well; though predictably it now polls better) nor the energy jobs his Administration supported (presumably because of the Solyndra faux scandal).

While leads me to wonder whether he’s afraid to open up the question of climate change. Vilsack, at least, refused to address it in that press conference, effectively saying that Monsanto would save us all.

Q Could you talk a little bit about the drought itself? Is it very unusual? Did anyone see it coming? Is it from climate change? Is there anything you can do to prepare?

SECRETARY VILSACK: I’m not a scientist so I’m not going to opine as to the cause of this. All we know is that right now there are a lot of farmers and ranchers who are struggling. And it’s important and necessary for them to know, rather than trying to focus on what’s causing this, what can we do to help them. And what we can do to help them is lower interest rates, expand access to grazing and haying opportunities, lower the penalties associated with that, and encourage Congress to help and work with us to provide additional assistance. And that’s where our focus is.

Long term, we will continue to look at weather patterns, and we’ll continue to do research and to make sure that we work with our seed companies to create the kinds of seeds that will be more effective in dealing with adverse weather conditions.

It’s one of the reasons — because they have done that, it’s one of the reasons why we’re still uncertain as to the impact of this drought in terms of its bottom line because some seeds are drought-resistant and drought-tolerant, and it may be that the yields in some cases are better than we’d expected because of the seed technology. [snip]

Q Mr. Secretary, I want to follow through on the climate change question. Is there any long-range thinking at the Department that — you had the wildfires and the heat wave and the rise in sea levels, and now this drought — that there’s something more going on here than just one year of a bad crop, and you need more than better seeds, maybe do something about climate change?

SECRETARY VILSACK: Our focus, to be honest with you, in a situation like this is on the near term and the immediate, because there’s a lot of pressure on these producers. You take the dairy industry, for example. We’ve lost nearly half of our dairy producers in the last 10 years. They were just getting back to a place where there was profitability and now they’re faced with some serious issues and, again, no assistance in terms of disaster assistance.

So that’s our near-term focus. Long term, we obviously are engaged in research projects; we’re obviously working with seed companies. Don’t discount the capacity of the seed companies. These technologies do make a difference. And it’s one of the reasons why, at least based on the yields today, we’re looking at potentially the third largest corn crop in our history. Now, that may be adjusted downward, it may be adjusted upward — depends on the rain, depends on circumstances. But even with the difficulties we’re experiencing, we’re still looking at a pretty good crop as of today. Tomorrow it could change, obviously.

Now maybe my instinct is incorrect and this won’t affect the campaign, either directly or indirectly. Maybe the Administration is gambling they can offer sufficient short term relief in IA and other must-win states to stave off the political effect of this drought until after the election. Maybe the Administration is just waiting a few weeks to get a better sense whether the dire predictions about the drought come true.

But for the moment, let me just register surprise that the campaign has been as silent about the drought as it has.