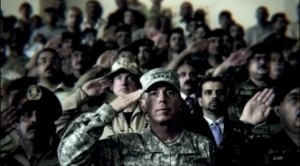 In happier days, David Petraeus was the face of Army recruiting in an ad on national television. Today, he is the face of a failed program that endangers the entire plan for withdrawal of NATO forces from Afghanistan.

In the biggest fallout yet from the massive increase in green on blue deaths in Afghanistan, US Special Operations forces have suspended training of Afghan Local Police and Afghan special forces until all members of these forces have been re-evaluated from a security standpoint. There are several important points to be made about this development.

The move does not affect the vast majority of Afghan forces — more than 350,000 Afghan National Army soldiers and Afghan National Police members — who are still being trained and are still working in the field with American and NATO counterparts, military officials said.

The story first broke in the Washington Post, and their account describes a very difficult bit of reality setting in on the military as it assesses the rapid acceleration of green on blue attacks:

The move comes as NATO officials struggle to stem the tide of attacks on NATO forces by their Afghan colleagues. The attacks, which have killed 45 troops this year, have forced NATO officials to acknowledge a painful truth: Many of the incidents might have been prevented if existing security measures had been applied correctly.

But numerous military guidelines were not followed — by Afghans or Americans — because of concerns that they might slow the growth of the Afghan army and police, according to NATO officials.

Note also that while there have been 45 deaths of NATO forces in green on blue killings this year alone, the Post tells us that there have only been three attacks in which Afghan Local Police turned their weapons on NATO personnel with whom they were working since the program to train ALP began in 2010.

Another key point to be made about this program of training Afghan Local Police and special forces by US Special Operations forces is that this program was a signature part of David Petraeus’ COIN strategy. The Post describes the program without mentioning Petraeus:

The local police initiative places Special Forces teams in remote villages where they work with Afghan elders and government officials to help villagers defend themselves against insurgent attacks and intimidation. U.S. officials have touted the program, which numbers about 16,000 Afghans, as a critical way to spread security and the influence of the Afghan government to remote areas of the country where the Taliban have found haven.

Likewise, the Times doesn’t mention Petraeus when it describes the program:

The Afghan Local Police program is a relatively new program that has sent American Special Operations forces into more rural areas to train Afghan recruits who are not part of the main Afghan army or police. These police forces, while comparatively small in number, are regarded as an important stopgap to secure remote corners of Afghanistan as international troops withdraw.

Reuters, however, makes the daring move of actually tying Petraeus’ name to this program that is in such a failed state:

The ALP is a militia, set up two years ago by U.S. Forces, in villages where the national police force — a separate body trained by NATO — is weak. The ALP has been beset by allegations of abuse and widespread corruption.

The ALP is a flagship project of U.S. General David Petraeus, who was replaced last year by U.S. General John Allen as commander of foreign forces in Afghanistan.

The final key point to come out of the Post article is that there now seems to be a push to separate NATO and Afghan forces at times when they are not actually on duty, rather than encouraging the troops to get to know one another better:

Troops are now being advised to stay away from Afghan soldiers and police officers during vulnerable moments, such as when they are sleeping, bathing or exercising, according to a directive from NATO leaders.

“We need to reduce risks by reducing certain interactions with the Afghans. We don’t need to sleep or shower next to them, because that’s when we’re most vulnerable,” said a NATO official who has been charged with making security recommendations. “It’s about force protection without endangering the relationship. It’s a true teeter-totter.”

The acknowledgement by US Special Operations that vetting of Afghan recruits has been poor enough that they are suspending training may become a significant watershed event. If there is not an accompanying suspension of training of the larger ANA and ANP, then the military risks sending the message to those who train these forces that they are less important than Special Operations personnel. But if training of the larger force is suspended, then look for the size of the overall Afghan security force to shrink dramatically. The rate of loss of forces is still very high, so if training is suspended then the force will begin to shrink immediately. Re-vetting such a huge force will be a huge problem, as the Post notes that even for many Afghan force members who have been vetted, they have never been issued identification badges.

In short, NATO faces the dilemma of choosing between telling those training the bulk of Afghan forces that they are not as important as Special Operations forces or suspending training for a security re-check and watching the Afghan force size fall below a level at which they will be comfortable handing over responsibility for security as NATO withdraws.