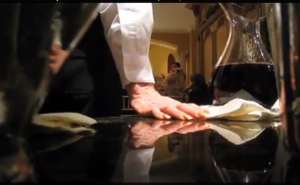 In an effort to excuse Mitt’s disdain for 47% of the country, Republicans are pointing out there’s a break in the tape from the Mitt fundraiser. MoJo explains the break this way.

According to the source, the recording device was inadvertently turned off between these two segments. The source noticed quickly and began to re-record, resulting in an estimated a one-to-two minute loss of tape.

The appearance of a hand at the front of the bar in the first frames of the second video, in front of the camera, may suggest that that person had just restarted the video and was standing there to make sure it was recording.

Now, I suggested that the 2 minutes consisted of Mitt showing physical proof to support this claim he made (perhaps because he wanted to prove he’s even a bigger dick than LBJ).

It’s speaking softly but carrying a very, very, very big stick. And this president instead speaks loudly and carries a tiny stick.

But there’s a much more logical explanation.

The transcript MoJo put up shows that during the gap, Mit concludes his discussion of how he intends to attract swing voters, and then seems to respond to a question from a donor about the size of our military.

What I have to do is convince the 5 to 10 percent in the center that are independents that are thoughtful, that look at voting one way or the other depending upon in some cases emotion, whether they like the guy or not, what it looks like. I mean, when you ask those people…we do all these polls—I find it amazing—we poll all these people, see where you stand on the polls, but 45 percent of the people will go with a Republican, and 48 or 4…

Romney: …and about twice as much as China, not 10 times as much like it’s reported. And we have responsibility for the whole world. They’re only focused on one little area of the world, the South China Sea, the East China Sea, that’s it. And they’re building a military at a rapid rate. So this idea that somehow we’ve already spent so much money in the military—it’s like, guys, don’t overthink how strong we are. We—you probably know it, this was a couple of years ago, but we had one of our aircraft carriers sailing by Japan, and the Chinese pulled up behind it in a diesel sub, in a super-quiet diesel sub, pulled up behind it. It could have been torpedoed.

Now, I actually would be interested in the 2 minute gap, since Mitt somehow makes light of the fact that we spend more on our military than the rest of the world combined. And finds some way to suggest we only spend twice as much as China–which doesn’t even work out as a percentage of GDP.

In any case, in addition to the completion of Mitt’s understanding of election math (which seems not to add up), what we miss is the question he’s responding to–which seems to question whether our military needs to be as large as it is–and beginning of Mitt’s case that our military does need to be that big. Part of that argument seems to be based on the fact that a Chinese sub once got close to one of our ships–which would seem to address technology and training, not gross expenditures. And part of it seems to misunderstand where the Chinese sphere of influence extends to.

But in general, it appears to be Mitt’s case for increasing (or at least sustaining) the funding to our military even while we can’t afford to keep teachers in classrooms.

It would be interesting to see this 2 minute gap: because it would show that the same guy who disdains 47% of the country also believes we have the “responsibility” to police the entire globe.

The missing 2 minutes show that the oligarch blowing off half his country intends to expand the American empire.