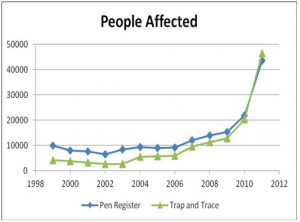 The ACLU sued the government to get it to release the reports on how much DOJ has used Pen Registers and Trap and Trace devices to get criminal suspects’ phone and email call records.

The records show a sharp increase in the use of PR/TT requests. Of particularly note, three times as many people have had their records turned over to DOJ under Obama.

In its post on the topic, ACLU notes that whereas, under Bush, neither Congress nor the public were getting these records, Obama’s Administration has submitted the reports in timely fashion, but Congress has not released the reports.

When no reports surfaced in 2010 and 2011, the ACLU filed a FOIA request to obtain them. After our request received no response, we filed suit to enforce it.

Although the Justice Department has in the past repeatedly failed to submit the annual reports to Congress, it appears that it has now cleaned up its act. Both the 2010 and 2011 reports were submitted to Congress in compliance with the reporting requirement. Unfortunately, Congress has done nothing at all to inform the public about the federal government’s use of these invasive surveillance powers. Rather than publishing the reports online, they appear to have filed them away in an office somewhere on Capitol Hill.

This is unacceptable. Congress introduced the pen register reporting requirement in order to impose some transparency on the government’s use of a powerful surveillance tool. For democracy to function, citizens must have access to information that they need to make informed decisions—information such as how and to what extent the government is spying on their private communications. Our representatives in Congress know this, and created the reporting requirement exactly for this reason.

It shouldn’t take a FOIA lawsuit by the ACLU to force the disclosure of these valuable reports. There is nothing stopping Congress from releasing these reports, and doing so routinely. They could easily be posted online, as the ACLU has done today.

Of course, Congress didn’t require DOJ to share this information with actual citizens; it only required DOJ share the information with Congress. Republicans have no incentive to turn over records that show Obama’s DOJ has investigated crime (in particularly the drug trafficking these records are most often used to investigate) more aggressively than Bush did. And Democrats have no incentive to show their President has trampled privacy. And given the likelihood these records are being used in creative new ways, neither party has an incentive giving people more reason to question how PR/TT are being used (I’ve long noted that their used started to rise after Bush’s illegal wiretap program got exposed, and suspect there may be a connection).

In short, Congress is complicit in hiding the extent to which increasing numbers of Americans are being surveilled by the government.

But that shouldn’t be a surprise at this point.

tweets from our circle
bmaz@bmazRT @RachelBitecofer: The red flag that someone isn't mentally fit to own an AR-15 is probably the fact that they want to own an AR-15.21 minutes ago29 May 2022
bmaz@bmazRT @PartyWurmple: I like how we've gone from 'libs want to ban guns when they can't tell a clip from a magazine' to 'all guns are basicall…54 minutes ago29 May 2022
Jim White@JimWhiteGNVRT @delatorre: My petition for Tyler Nesbitt to get a start needs more signatures. Please help and tag @GatorsBB. They make the lineups.4 hours ago29 May 2022
Jim White@JimWhiteGNVWyatt: "Why not win the whole thing?"5 hours ago29 May 2022
Jim White@JimWhiteGNVAggies can pitch and hit, but their defense is FSU clown-level.5 hours ago29 May 2022
Jim White@JimWhiteGNVRT @davidhogg111: The Texas shooter and the shooter at my high school both waited until they were of the legal age. Don’t tell me these law…6 hours ago29 May 2022
Jim White@JimWhiteGNVDown go the Yankees! twitter.com/RaysBaseball/s…7 hours ago28 May 2022
Ed Walker 🍞🌹💉💉@MasaccioEWRT @Artemesia44: Being complicit in the murder of yet another couple dozen teachers and students ought to put these moral monsters under st…10 hours ago28 May 2022
Ed Walker 🍞🌹💉💉@MasaccioEWRT @axios: The largest shareholder in America's largest gunmakers isn't a reclusive billionaire or a 2nd Amendment rabble-rouser with a hea…13 hours ago28 May 2022
Ed Walker 🍞🌹💉💉@MasaccioEWRT @ChrisInParis: Democrats are the masters of cutting the baby in half, leaving few happy with the end result. Bravo.13 hours ago28 May 2022
Ed Walker 🍞🌹💉💉@MasaccioEWRT @DanBuk4: @dandrezner Scalia wrote in the 2005 majority opinion in Castle Rock v. Gonzales that cops DO NOT have a duty to protect http…14 hours ago28 May 2022
emptywheel@emptywheelTIL: Henry Tarrio, Brandon Straka, and Owen Shroyer are not politically connected. edition.cnn.com/2022/05/26/pol… pic.twitter.com/tb9EwWBnsp15 hours ago28 May 2022
Ed Walker 🍞🌹💉💉@MasaccioEWRT @PlumKeith: "A labor leadership that is tied at the hip to the Democrats is not going to be the force of change." Kshama Sawant.15 hours ago28 May 2022
RayneToday@raynetodayRT @DirkSchwenk: Guns. A rant. Do not listen to any 2A defender or conservative about how to stop the slaughter in the US. There is only…1 day ago27 May 2022
RayneToday@raynetodayThread. I want Congress to find out why Border Patrol was involved at all. Uvalde may be within the 100-mile radius… twitter.com/i/web/status/1…2 days ago27 May 2022
RayneToday@raynetodayRT @3vanSutton: This is a song we teach children in a country where multiple states are banning educators and students from saying "gay" or…2 days ago27 May 2022
RayneToday@raynetodayRT @irma5913: New Jersey governor says Republicans taking ‘blood money’ from gun lobby politi.co/3sXWbzM via @politico2 days ago27 May 2022
RayneToday@raynetodayWe need the gap in police scanner audio archive explained badly. twitter.com/tomwcleary/sta…2 days ago27 May 2022
No Easy Day, WikiLeaks, and Mitt’s 47%: Three Different Approaches to... Steven Bradbury’s Revenge
Scroll to top