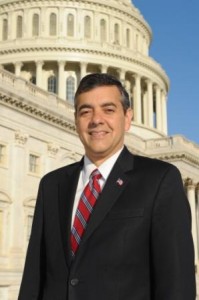 Proving that Florida is the fetid swamp where political rectitude goes to decay and die a foul death, Congressman David Rivera (R-FL) has raised the bar for misdeeds in office without resigning in disgrace.

In late September, Manny Garcia and Marc Caputo of the Miami Herald documented that Rivera had secretly funded a campaign for a sham candidate in the August Democratic primary in Rivera’s Florida district:

Justin Lamar Sternad, whose failed congressional campaign became the subject of a federal grand-jury investigation, has told the FBI that U.S. Rep. David Rivera was secretly behind his run for office, The Miami Herald and El Nuevo Herald have learned.

Sternad, 35, also told authorities that his campaign manager, Ana Sol Alliegro, acted as the conduit between the campaign and Rivera, who allegedly steered unreported cash to the Democrat’s campaign, according to sources familiar with the investigation and records shared with The Herald.

Sternad said Alliegro referred to the congressman by his initials, “D.R.,” and called him by the nickname, “The Gangster.”

On October 1, Garcia and Caputo informed us that the Republican Party in Florida is preparing for two outcomes for Rivera – indictment or a loss:

Bracing for embattled U.S. Rep. David Rivera to be indicted or lose his election, Republicans have started lining up potential successors to regain the seat in 2014 if the congressman’s Democrat opponent defeats him in November.

Rivera has at least become toxic to other Republicans in Florida, but his ties to prominent Florida Republicans are very strong:

Rivera’s closest ally, U.S. Sen. Marco Rubio, has been keeping his distance from Rivera as well. The two remain friends and own a Tallahassee home together that briefly went into foreclosure in 2010 when both former state representatives ran for higher office.

Rivera no longer attends high-profile events with the senator or with presidential candidate Mitt Romney, who held an event in Rivera’s district where the congressman was the only top Republican no-show.

Yup, Rivera is so toxic politically that he can’t even show his face when his closest political ally and the Republican nominee for President are holding a rally in his own district. Even in the face of that reality, Rivera still has not resigned.

So far, even the eleven ethics charges filed against him yesterday still have not pushed him over that final hurdle into resigning:

Investigators with the Florida Commission on Ethics found that Rivera’s secret deal to work as a political consultant for the Magic City Casino — formerly the Flagler Dog Track — created a conflict of interest for the lawmaker. The ethics panel also found that the Republican broke state ethics laws by failing to fully disclose his finances from 2005 to 2009.

Rivera signed a consulting contract with the Magic City Casino’s owners in 2006 to run a campaign to win voter approval for slot machines at Miami-Dade pari-mutuels. But Rivera had the money from the deal sent to Millennium Marketing, a company founded by his mother and godmother, records show. Rivera then received at least $132,000 back from Millennium — money that Rivera has called loans that did not have to be disclosed.

At least even Republican polls are indicating that Rivera will lose his race by about ten points, so it appears that the voters in Rivera’s district are paying attention. It will be very interesting to see how Rivera reacts once he has been voted out of office and is facing potential criminal charges. Will he turn on his former colleagues? What nuggets could he offer in return for lesser charges?