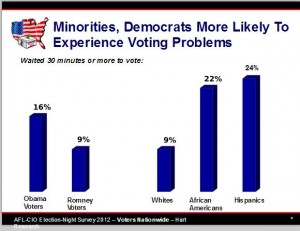 Despite a claim from Miami-Dade Mayor Carlos Gimenez that “This is not a Third World country”, his intentionally small government has now entered into its third day of attempting to count ballots from Tuesday’s general election. While Miami-Dadistan is by no means the only jurisdiction where the election overwhelmed the resources on hand, it still stands out as the biggest example of the impact of the drive to cut taxes so low that a functional government cannot be sustained.

Dan Froomkin at HuffPo pointed yesterday to data from Hart Research, reproduced in the figure here, that shows minorities and Democrats disproportionately across the country faced longer waiting times to vote. A picture is beginning to emerge, though, showing that efforts by authorities to suppress minority votes actually provides stronger incentives to stand in the excessively long lines and vote anyway, providing the best sort of revenge.

As Froomkin also pointed out, despite Barack Obama mentioning in his victory speech that “We have to fix that” regarding the long lines, one of the best mechanisms for a Federal response to the problems has been gutted, as the Washington Post has noted that the Election Assistance Commission, put into place after the 2000 voting fiasco, is a zombie commission that has no appointed members. Obama’s Justice Department is well aware of the organized efforts by many Republican governors to suppress minority voting through overzealous purging of voting rolls, so there is no excuse for the Obama administration allowing the commission to be depopulated prior to the election.

But to return to the Fiasco in Florida, the Miami CBS station posed the obvious question to election authorities there:

In September, CBS4 News was the first to report on the long ballot and the potential effect it may have during the election.

“There will be lines,” Supervisor of Elections Penelope Townsley said at the time.

CBS4 News put the ballot to the test on October 25th and found that taking 30 minutes to complete it would not be unusual.

“No, actually not,” replied Gimenez.

When asked if they ever worked out an average time it would take voters to fill out the forms, [Deputy Supervisor of Elections Christina] White said they didn’t have one.

Another indicator of the third world status of the Miami-Dade government is the state of denial in which they are operating. Despite making Florida once again a global laughingstock for its inability to conduct an election, we see claims of success:

The fallout left Florida the final much-mocked but blank spot on the long-decided Electoral College map.

Elections supervisors and Miami-Dade Mayor Carlos Gimenez acknowledged a range of problems at a “handful” of sites — topped by a lengthy ballot and poorly organized precincts. But they also argued that no more than a half-dozen of the county’s 541 polling places experienced severe waits, including the Brickell Avenue area of downtown Miami, West Kendall, Country Walk, Goulds and Homestead.

Deputy supervisor of elections Christina White defended the county’s overall handling of the election, noting that 90 percent of precincts were closed by 10:45 p.m.

“We think Election Day was largely a success,’’ she said.

One claim in the Herald article cited above is that the Brickell Avenue site consolidated a number of precincts so that more people could vote at a site they were familiar with. But I already noted that Florida did a poor job generally in notifying people that they had been changed into new precincts, as I got a surprise when I went to vote in the August primary. On Tuesday, Carol Rosenberg tweeted the fate of at least one Miami resident who stood in line two hours only to learn that he had been changed to a different voting site.

While Miami-Dadistan has not yet sunk to the levels of incompetence and fraud seen in the 2010 Afghanistan election, we can only wonder if they are just a tax cut or two away from being there.