The December 2010 Black Hole in the Network Interface Closet 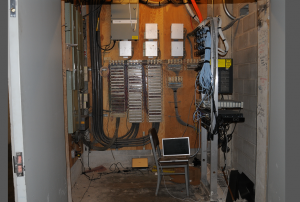 Note: the following timeline depends on the assertions of both the government and Swartz’ lawyers. It represents alleged facts as presented by self-interested parties, not uncontested facts. Documents used include the hardware search warrant affidavit,  superseding indictment, motion for discovery, pre January 4 suppression motion, January 4-6 suppression motion, consolidated response to motion to suppress, and exhibit to supplement to motion to suppress. I’ve also included Swartz’ FOIAs, as described in this Jason Leopold story, because I find some of the coincidences intriguing (see especially the timing of his request for Secret Service access to encrypted files and CERT, which I’ll return to in a later post).

November to December (probably November 29 through end of December):

During November and December, 2010, Swartz again used the “ghost laptop” (i.e., the Acer laptop) at MIT to download over two million documents from JSTOR,

During this period, when Swartz connected to MIT’s computer network, he circumvented MIT’s guest registration process altogether. Rather than let MIT assign his computer an IP address automatically, Swartz instead simply hard-wired into the network and assigned himself two IP addresses. He did so by entering a restricted network interface closet in the basement of MIT’s Building 16, plugging the computer directly into the network, and operating the computer to assign itself two IP addresses.

He also moderated the speed of the downloads, which made them less noticeable to JSTOR.

Because the hacker had modified the speed of his downloads, JSTOR did not notice his latest downloads until Christmas. Now that MIT’s network security had a more robust set of network tools, they could consult network traffic routing records and trace the IP address to a concrete physical location on campus.

So on January 4, 2011, an MIT network security analyst traced the hacker’s IP address to a network switch located in a basement wiring closet in MIT’s Building 16.

Using network tools available to MIT on this occasion, the computer was tracked back to a specialized network wiring closet in the basement of Building 16 at MIT.

On January 4, 2011, Dave Newman, MIT Senior Network Engineer, located an ACER netbook in a data room in the basement of an MIT building, which Newman believed was the computer being used to download journal articles from JSTOR. Timeline at 6. Newman, in consultation with Paul Acosta, MIT Manager of Network Operations, decided to leave the netbook physically undisturbed and instead to institute a “capture” of the network traffic to and from the netbook, which was done via Newman’s laptop, which was connected to the netbook and which intercepted communications coming to it. Id.; US Secret Service Investigative Report (“Investigative Report”), Exhibit 15 at 2. These interceptions were commenced without a warrant or other judicial process. At 11:00 am, Captain Jay Perault of the MIT police arrived, along with Det. Joseph Murphy of the Cambridge Police Department and Secret Service S/A Michael Pickett, who told MIT personnel that he handled computer forensics for the Secret Service. Id.; Investigative Report at 1. It was decided, “at the recommendation of Michael Pickett,” that the netbook would be left in place, with MIT continuing to monitor the traffic to and from it, and that video surveillance would be set up in the data room to assist in identifying “the suspect.”

Neither S/A Pickett nor Det. Murphy applied for or received a Title III warrant authorizing the interception of electronic communications or were in any way authorized by judicial process to direct and persuade MIT personnel to intercept communications and other data flowing to and from the ACER netbook between 11:00 am on January 4, 2011, and the time of the seizure of the ACER on January 6, 2011.

Newman, Acosta, and S/A Pickett, along with Mike Halsall, MIT Senior Network & Information Security Analyst, continued to physically monitor the netbook until 2:30 pm. Timeline at 7. During that time “strategy [was] determined for continual monitoring of traffic to/from the netbook.” Id. After the MIT General Counsel’s office approved the disclosure of information to law enforcement agents even in the absence of a warrant or process complying with the Stored Communications Act (“SCA”), 18 U.S.C. § 2701 et seq. (and in contravention of MIT’s published policies of only disclosing such information after receipt of such process), and at a time when MIT personnel were acting as government agents, Halsall gave S/A Pickett historical network flow data relating to two IP addresses associated with the netbook from December 14, 2010, up to that date,4 and DHCP log information for computers using the MIT network as “ghost macbook” and “ghost laptop” for time periods including September and October of the previous year.

S/A Pickett left the MIT campus at 4 pm on January 4, and Newman waited to hear from him regarding “where to put the captured network traffic.” Timeline at 7. Thereafter, Pickett contacted the CERT Coordination Center at the Software Engineering Institute at Carnegie Mellon University6 and received instructions regarding how to upload the network flow and DHCP log data to the CERT drop box. Investigative Report at 3. S/A Pickett authored an email at 6:46 pm on January 4, 2011, stating that “[t]he flow traffic is currently being uploaded to the CERT dropbox.” Exhibit 23.

On January 5, 2011, Ellen Finnie Duranceau, MIT Program Manager of Scholarly Publishing and Licensing, took notes of a conversation with Halsall in which she indicated that the netbook was “left in place to capture traffic” because law enforcement “want[ed] to find intent + motive.” Exhibit 24 at 2. Those same notes stated that it was “now a Federal case” and that everything that had been provided was done “by choice,” and not pursuant to a subpoena. Id. at 3.

… an MIT network security analyst traced the hacker’s IP address to a network switch located in a basement wiring closet in MIT’s Building 16.

When MIT personnel entered the closet, they found a cardboard box with a wire leading from it to a computer network switch.

MIT called campus police to the scene, who, in turn, brought in the Cambridge Police and the Secret Service. over the course of the morning and early afternoon of January 4th, MIT and law enforcement officers collaboratively took several steps to identify the perpetrator and learn what he was up to:

The law enforcement team replaced the scene as they had found it. Within an hour of their departure, Swartz entered the closet and swapped out the laptop and hard drive.

January 6, 2011: Swartz enters the closet again, trying to hide his face from a camera, retrieves his computer, and then logs into MIT’s network from the student center to assign his computer a new IP address and MAC address.

January 6, 2011, 2:00 PM: MIT Police Captain stopped Swartz on his bike and identified himself as a police officer.

January 7, 2011: SS emails AUSA Stephen Heymann saying he is “prepared to take custody of the laptop … whenever you feel is appropriate. As far as I know n oone has sought a warrant for the examination of the computer” or other hardware. This email was turned over belatedly in discovery.

February 28, 2011: Swartz FOIAs guidelines on Secret Service techniques for reading encrypted hard disks, as well as information on CERT’s involvement in a prior case.

March 10, 2011: Swartz FOIAs “any policies, procedures, or guides for using data stored by Google for investigations, data-collection, and surveillance.”

March 22, 2011: Swartz FOIAs “Any records requests made to Amazon and any responses from Amazon in connection with any such requests. This includes subpoenas, warrants, 2703 orders, National Security Letters, etc.”