The Cost of Bullshit: Climate Change, National Security, and Inaction 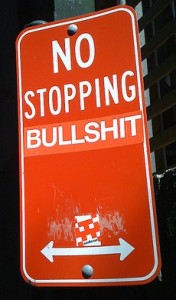 While we’re waiting for Congress and the White House to do something productive together for once, let’s recap:

•  The Department of Defense said climate change is a critical strategic concern with regard to its operations and its impact on defense efforts, based on its legislatively-mandated Quadrennial Defense Review (QDR) published two-plus years ago in 2010;

•  The State Department also said climate change is a serious threat to our national security, noted in its inaugural Quadrennial Diplomacy and Development Review (QQDR), also published two-plus years ago in 2010;

•  A who’s who of defense and diplomacy expressed their concerns about climate change and the need for urgent action, as Marcy noted two days ago; apparently whatever action has been taken so far has not impressed these experts as responsive to the threat climate change poses.

Yet if asked, the average American likely could not point to a single action taken by the U.S. government to reduce the impact of climate change.

In other words, all the effort expended and resources spent on drafting the components of the QDR and QQDR are wasted, the words published mere bullshit—more wasted government employees’ time and taxpayer money.

How much has this wordy inaction cost us?

Here’s a more specific opportunity to save taxpayer money:

…Of all military spending, energy accounts for a small proportion, roughly less than 2% of total military expenditures and 2% of total US energy usage–but is 93% of all US government energy consumption.In fact, the US military is the single biggest consumer of energy in the nation, at about 932 trillion BTU in 2009, resulting in 4% of all US carbon emissions.

Oil accounts for 78.5% of all US military energy usage (54% of that is jet fuel); electricity is 11%, direct use of natural gas comes in a bit under electricity. Direct use of coal and other sources of energy are small fractions of total usage. …

The amount spent on energy surely hasn’t declined since these numbers were published in 2009.

Yet Congress and the White House have been locking horns over the sequester for some time now, looking for places to cut costs. Doesn’t it seem like any item should be ripe for examination and audit for cost-cutting if the government is the largest consumer?

…The United States is far and away the largest military spender on the planet–but you probably already knew that. How much more? In 2010 the US accounted for 42.8% of all military spending in the world (and has doubled military spending since 2001). The next nearest competitor, China, accounts for 7.3% of global military spending. The UK, France, and Russia each spend roughly 3.7%. Japan, Saudi Arabia, Germany and Italy round out the top ten. All other nations spending 25.3% combined.

In dollar terms, the grand total spent on military offense and defense in 2010 was $1.6 trillion. So based on those calculations, done by a Swedish think tank, the US outspent China by 5.86 times. …

If the U.S. is the largest military spender, its energy expenditures must likewise be the largest globally. This means the U.S. military could provide the largest impact globally on climate change by urgently and robustly changing its fossil fuel consumption.

Which begs the question: are we going to stop wasting time and money on reports like the QDR and the QDDR when we’re clearly making no effort to follow the recommendations they contain by responding to climate change and its inherent national security risks?

Or are we going to save some serious money on downsizing our military’s fossil fuel consumption AND make immediate, widespread impact on climate change and national security at the same time?

We really need an answer because this bullshit is costing us a fortune in taxes and lost societal opportunities. (Hurricane Sandy cost the federal government at least $180 million dollars; it’s not yet clear how much February’s blizzard cost in tax dollars. Toronto CAN, however, spent CA$4 million on cleanup and repairs, and it was not the municipality hardest hit by the storm.)

And with each drought and mega-storm, the lack of response is costing us even greater treasure in loss of personal opportunities, homes and lives.