Detroit’s Emergency and Its Institute of the Arts 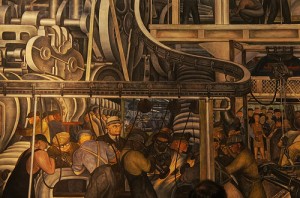 The Emergency Manager he’ll appoint is expected to come in and cut the wages of the city’s middle class workers and sell off Detroit’s assets like Belle Isle. Along with Belle Isle, observers expect Detroit’s excellent art museum, Detroit Institute of the Arts, home of some of the best Diego Rivera murals in the world, his tribute to Industry, to be sold.

Oddly, it’s the museum that offers a better solution for Detroit’s problems, and not just because the mural depicts people of all skin colors working side-by-side.

Last fall, the counties surrounding Detroit decided that the museum — one of the few shining glories in Detroit — served to the entire Southeast MI region, and voted to pass a millage to fund it. The vote was significant because the museum (heck, the communist murals themselves) has suffered from the same fate as the city itself: glory days when the city was booming, hard times when white flight began the process that has brought us where we are today, and then abandonment by the state.

Though the DIA began as an independent nonprofit in 1885, it quickly turned to the City of Detroit for financial help, and in 1919, it became a city department. The pattern was set: In good economic times, things were swell, but downturns were devastating. When the city nearly went belly-up in the 1970s, the state took over funding the museum — but only after it closed doors for three weeks in 1975.

The status quo held until John Engler swept into the governor’s office. Philosophically opposed to arts funding, he cut state arts spending by 46% in 1991.

The millage campaign to support museum elicited some of the same emotions that Detroit’s failure now has — though in much more muted form. DIA was managed by corrupt people; why should anyone get a bailout. But ultimately, just enough voters recognized that DIA is part of SE MI’s community, that voters came up with the money.

Opponents also cite a range of other concerns, from a reluctance among some suburbanites to subsidize a museum in Detroit and consider the tax “a bailout,” to the feeling that those who use the museum should be the ones who pay for it.

Those who favor the millage counter that the museum has already been raising an average of $16 million per year. As metro Detroit’s greatest cultural treasure with a regional audience, the responsibility to fund it should cut across county lines, advocates say.

“There’s no major city in the world without a major museum,” said Oakland County Executive L. Brooks Patterson, a prominent Republican who supports the millage.

“Taxes go to projects that are worthy, whether we use them or not,” Patterson said, noting that when he travels around the world to recruit business, he is always asked about schools, neighborhoods and cultural amenities. “The DIA is a huge opportunity for me to answer that question in a positive way. It’s an economic development tool for me.”

Last fall, the voters of SE MI chose to regionalize one of the cultural jewels of Detroit.Note, to some degree the state has stepped in to support the Red Wings and the Convention Center, Cobo Hall. Michigan has actually been in the process of picking and choosing which parts of Detroit it deems worth saving, all without acknowledging that’s what it is doing. It has not, in that process, ever picked Detroit’s residents.

With that in mind, consider how Scott Martelle, author of Detroit: A Biography, describes Detroit’s problems.

The problem in Detroit is not the people in charge (though some Detroit leaders have certainly failed the city). The real problem is the broader structure of government in the region. And therein lies a lesson for other urban areas and, perhaps, a template for avoiding what befell the Motor City.

Detroit, once the nation’s fourth largest city, has been crumbling since the 1950s, when its population peaked at a little over 1.84 million people. Estimates put the current population at under 700,000, and Detroit leads the nation’s large cities in the percentage of people living below the federal poverty line. More than a quarter of Detroit’s 140-square-mile city is now empty space. A Detroit house is cheaper to buy than a new car, and a high-paying job within the city limits is a rare thing to find, even with a recent influx of downtown-focused developments.

The emptying of Detroit stems from a complex mix of intractable racism, corporate and governmental decisions, failed institutions and crime levels that have driven most of the middle class to the suburbs. Local governments have regularly undercut each other with tax deals to lure jobs (much as Texas Gov. Rick Perry tried to do on his recent visit to California). These deals have helped corporations at the expense of communities like Detroit, causing the city’s tax base to shrink faster than the city government could adapt and leaving it with massive debt, annual operating deficits, a demoralized workforce, an impoverished population base — and no plan for how to fix things.

This all happened in a state that relies more on local property taxes for services than many other states, meaning that affluent (usually white) municipalities can enjoy the benefits of their wealth, while nearby poorer cities suck ever more out of the residents that remain. This left Detroit, in 2011, as number 1 among top 50 cities in terms of tax rates, and dead last among those top 50 cities in terms of property values.

Martelle argues that the best solution for Detroit is to adopt regional solutions to the problem.

To come back, Detroit needs to start finding ways to change those factors. A racial divide, which pits white-majority suburbs against a black-majority city, is the toughest problem, but even it is solvable. The most important step would be to regionalize crucial services, including schools, police and fire protection. As much as suburbanites might dislike the notion, the metro region’s economic health depends on a vibrant and diverse economy and a stable core city. And as much as Detroiters may balk, they, in turn, need the support of the suburbs if they are to climb out of this hole.

Democrats and Republicans dreamed up this stupid Emergency Manager idea 30 years ago because it was easier to do that than take on the deep segregation in most of MI. I suspect Democrats chose to embrace Emergency Managers rather than offend the “Reagan Democrats” in Macomb and Wayne Counties. (Wayne is the county that includes Detroit, but also includes a lot of working class suburbs, many of them white; there has been talk of administering services in Detroit at the county level, though this would still leave out the far more affluent Oakland county of the mix.) Since then, globalization has wreaked havoc on all of MI, but the problem has been especially concentrated in the heavily black cities. And those same cities — Detroit especially — were particularly hard hit when predatory lending greatly accelerated the slow decline of many neighborhoods.

Last fall, voters in Southeast MI willingly chose to regionalize DIA. It’s time we started talking about regionalizing, at least, the future of its children.

tweets from our circle
bmaz@bmazRT @KagroX: Just like, I would say, there’s no way in the world that the VP, Speaker & President Pro Tem all go into Secret Service lockdow…4 minutes ago13 June 2021
emptywheel@emptywheelGiven the upcoming summit and the propaganda abt why DOJ changed their understanding about Assange, reupping form l… twitter.com/i/web/status/1…13 minutes ago13 June 2021
bmaz@bmazRT @brianbeutler: The most The Democrats thing in the world would be lowering the cloture threshold to where they still need GOP permission…39 minutes ago13 June 2021
Ed Walker 🍞🌹💉💉@MasaccioEWRT @tania_flor: As someone whose undergraduate training was in CRT (so much gratitude+love always for @CTSJOxy) and whose graduate studies…11 hours ago13 June 2021
Jim White@JimWhiteGNVLeast surprising development ever. Was really stupid to allow these dangerous devices. Gainesville's e-scooter ex… twitter.com/i/web/status/1…13 hours ago13 June 2021
Jim White@JimWhiteGNVI have sunk to such a low spot in college baseball that I am watching the LSU-Tennessee game. I'm not at all intere… twitter.com/i/web/status/1…13 hours ago13 June 2021
Jim White@JimWhiteGNVDaughter just texted us this cool picture. A friend we’ve known for years from back in the horse show days just tur… twitter.com/i/web/status/1…14 hours ago13 June 2021
Ed Walker 🍞🌹💉💉@MasaccioEWRT @ddayen: No, it's about taxes, and Biden created this situation by demanding that all the relatively popular spending must be "paid for"…16 hours ago12 June 2021
RayneToday@raynetodaySounds fishy to me, like a cover story. twitter.com/kylegriffin1/s…6 months ago19 December 2020
RayneToday@raynetodayGee whillikers, I wonder why and when a county in Arizona was breached?? /snark twitter.com/Reuters/status…6 months ago18 December 2020
RayneToday@raynetodayRT @JustinPHicks: “I still cannot get a straight answer out of the Trump administration about why Michigan, like many other states, is rece…6 months ago18 December 2020
RayneToday@raynetodayRT @mcsweeneys: We've updated our catalog of Trump's cruelties, collusions, corruptions, and crimes. He's up to 1,028 now. https://t.co/zis…6 months ago15 December 2020
RayneToday@raynetodayRT @LoopEmma: Saudi Arabia hires new crop of lobbyists ahead of Biden administration cnbc.com/2020/12/15/sau…6 months ago15 December 2020
Did Pakistan Carry Out Its Own Drone Strikes? The Cost of Bullshit: Climate Change, National Security, and Inaction
Scroll to top