For a guy who warned for years about an abuse of the FISA Amendments Act and Section 215 of the PATRIOT Act, I have to admit Ron Wyden was pretty circumspect  yesterday. He issued a statement, partly to reiterate his call to make this public, partly to suggest the program isn’t worth much.

The administration has an obligation to give a substantive and timely response to the American people and I hope this story will force a real debate about the government’s domestic surveillance authorities. The American people have a right to know whether their government thinks that the sweeping, dragnet surveillance that has been alleged in this story is allowed under the law and whether it is actually being conducted. Furthermore, they have a right to know whether the program that has been described is actually of value in preventing attacks. Based on several years of oversight, I believe that its value and effectiveness remain unclear.

And he sent out three tweets:

Of course, it’s the second tweet — showing the Director of National Intelligence lying in testimony to Congress about whether the NSA collects “any data at all on millions or hundreds of millions of Americans” — I found most interesting.

Wyden always has had a knack for exposing people as liars.

By the end of the day the National Journal had contacted Clapper to provide him an opportunity to explain why this lie to Congress wasn’t a lie. He offered a nonsensical explanation.

Director of National Intelligence James Clapper said Thursday that he stood by what he told Sen. Ron Wyden, D-Ore., in March when he said that the National Security Agency does not “wittingly” collect data on millions of Americans.

“What I said was, the NSA does not voyeuristically pore through U.S. citizens’ e-mails. I stand by that,” Clapper told National Journal in a telephone interview.

On March 12, at a hearing of the Senate Intelligence Committee, Wyden asked Clapper: “Does the NSA collect any type of data at all on millions or hundreds of millions of Americans?” Clapper responded: “No, sir.” When Wyden followed up by asking, “It does not?” Clapper said: “Not wittingly. There are cases where they could, inadvertently perhaps, collect—but not wittingly.” Clapper did not specify at the time that he was referring to e-mail. [my emphasis]

Clapper’s lie — that he took Wyden’s “collected any type of data at all” to mean “voyeuristically pore through emails” — is all the worse for how bad a non-sequitur it is. Caught in a lie, the head of our Intelligence Community responded with word salad.

Given that abysmal attempt to explain away his lie, I find it all the more curious the Administration decided Clapper, newly exposed as a liar, would be the guy to head pushback to the revelations of the last few days. Late in the day Clapper issued first one, then another “statement” on the revelations.

Both, of course, issued stern condemnations of leaks revealing that he had lied (and that Americans have no privacy).

The unauthorized disclosure of a top secret U.S. court document threatens potentially long-lasting and irreversible harm to our ability to identify and respond to the many threats facing our nation.

The unauthorized disclosure of information about this important and entirely legal program is reprehensible and risks important protections for the security of Americans.

Those are hollow warnings, of course, for the reasons I laid out here.

Clapper then goes on to claim that both stories misrepresent the programs.

The article omits key information regarding how a classified intelligence collection program is used to prevent terrorist attacks and the numerous safeguards that protect privacy and civil liberties.

The Guardian and The Washington Post articles refer to collection of communications pursuant to Section 702 of the Foreign Intelligence Surveillance Act.  They contain numerous inaccuracies.

Worlds tiniest violin! After refusing urgent requests from members of Congress who had been briefed on this to be transparent for years, the Intelligence Community has lost its ability to spin this!

Perhaps the most interesting part of Clapper’s two statements, however, is the way Clapper purportedly clarified a detail about the WaPo/Guardian stories on PRISM.

Clapper — and an anonymous statement from a Senior Administration Official issued minutes before Clapper’s — made explicitly clear PRISM operates under Section 702 of the FISA Amendments Act.

Section 702 is a provision of FISA that is designed to facilitate the acquisition of foreign intelligence information concerning non-U.S. persons located outside the United States. It cannot be used to intentionally target any U.S. citizen, any other U.S. person, or anyone located within the United States.

Activities authorized by Section 702 are subject to oversight by the Foreign Intelligence Surveillance Court, the Executive Branch, and Congress. They involve extensive procedures, specifically approved by the court, to ensure that only non-U.S. persons outside the U.S. are targeted, and that minimize the acquisition, retention and dissemination of incidentally acquired information about U.S. persons.

Section 702 was recently reauthorized by Congress after extensive hearings and debate.

This claim had only been implicit in the reporting in the WaPo and Guardian.

The WaPo provides this explanation for the genesis of the program.

PRISM was launched from the ashes of President George W. Bush’s secret program of warrantless domestic surveillance in 2007, after news media disclosures, lawsuits and the Foreign Intelligence Surveillance Court forced the president to look for new authority.

Congress obliged with the Protect America Act in 2007 and the FISA Amendments Act of 2008, which immunized private companies that cooperated voluntarily with U.S. intelligence collection. PRISM recruited its first partner, Microsoft, and began six years of rapidly growing data collection beneath the surface of a roiling national debate on surveillance and privacy. Late last year, when critics in Congress sought changes in the FISA Amendments Act, the only lawmakers who knew about PRISM were bound by oaths of office to hold their tongues.

In exchange for immunity from lawsuits, companies such as Yahoo and AOL are obliged to accept a “directive” from the attorney general and the director of national intelligence to open their servers to the FBI’s Data Intercept Technology Unit, which handles liaison to U.S. companies from the NSA. In 2008, Congress gave the Justice Department authority for a secret order from the Foreign Surveillance Intelligence Court to compel a reluctant company “to comply.”

The Guardian includes this.

The NSA access was enabled by changes to US surveillance law introduced under President Bush and renewed under Obama in December 2012.

The revelation also supports concerns raised by several US senators during the renewal of the Fisa Amendments Act in December 2012, who warned about the scale of surveillance the law might enable, and shortcomings in the safeguards it introduces.

When the FAA was first enacted, defenders of the statute argued that a significant check on abuse would be the NSA’s inability to obtain electronic communications without the consent of the telecom and internet companies that control the data. But the PRISM program renders that consent unnecessary, as it allows the agency to directly and unilaterally seize the communications off the companies’ servers. 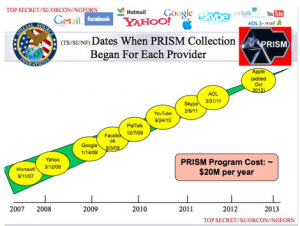 But look at what they say about the timing. WaPo says the program started in May 2007.

Apple demonstrated that resistance is possible when it held out for more than five years, for reasons unknown, after Microsoft became PRISM’s first corporate partner in May 2007.

Some of the world’s largest internet brands are claimed to be part of the information-sharing program since its introduction in 2007. Microsoft – which is currently running an advertising campaign with the slogan “Your privacy is our priority” – was the first, with collection beginning in December 2007.

The image included, however, says Microsoft got started in September 2007.

Furthermore, there appears to be far more involvement from the FBI in the program that Section 702 would require or even allow.

Confirming — or claiming — that this program operates exclusively under Section 702 would be a leak of illegal information if it came from anywhere else. I’ve got a suspicion it is not, in fact, entirely true.

Yesterday, the National Journal also asked Clapper to assess his own career. Clapper responded by repeating a comment he made at a recent hearing when asked about Benghazi.

Clapper, asked to reflect on his tenure as DNI for a special issue of National Journal, also commented on the intelligence community’s handling of the Sept. 11, 2012, Benghazi attack that left U.S. Ambassador to Libya Chris Stevens and three other Americans dead. “The major lesson I learned from that is, don’t do talking points,” Clapper said.

He made this comment, of course, before the Administration issued in his name what must have been hastily drafted talking points.