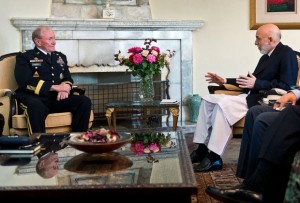 Dempsey and Karzai pose for the cameras while their countries come no closer to an agreement keeping US troops in Afghanistan. (Defense Department photo)

As the Afghanistan disaster careens closer to the late 2014 end of the NATO mission, the US continues to embarrass itself while it perpetuates the charade of trying to negotiate terms for US forces to remain in Afghanistan beyond 2014. On Monday, the US flew Chairman of the Joint Chiefs Martin Dempsey to Kabul where he had a photo opportunity with Hamid Karzai. Even while the “meetings” were taking place, unfolding events in Afghanistan demonstrate that US plans to keep thousands of troops in Afghanistan under an agreement that has not yet been negotiated show the same lack of situational awareness that has characterized the entire failed military effort there.

As I have been harping for months, a single issue controls the entire concept of whether the US will have troops in Afghanistan after 2014. Just as we saw in Iraq, the US simply will not leave troops in the country if there is no agreement granting criminal immunity to the troops. However, the articles in today’s New York Times and Washington Post on Dempsey’s visit make no reference to the role that immunity will play in whether an agreement is signed. It appears that one has to be retired from the Obama administration to be able to confirm the importance (and unlikelihood of its being granted) of the immunity issue. After blathering that he was making no plans under the zero option (of no US troops in Afghanistan post-2014), Dempsey said that he wants to know where things stand by October of this year and even allowed that there could be a “zero outcome”. That suggests to me that the military at least realizes the very late arrival at a zero outcome in Iraq was so disastrous that a year’s preparation for it will somehow make things better this time.

At the same time that Dempsey and Karzai were smiling for the cameras, the Afghan parliament was voting to remove the interior minister, Mujtaba Patang, from office over the high death rate of Afghan police. Patang announced that over the last four months, 2748 Afghan policemen have died. [I haven’t seen any numbers for how many Afghan military lives have been lost during this time, but that number is also likely to be very high.]

An article today by ToloNews regarding Patang’s ouster (although Karzai is referring the move to the Supreme Court to buy more time), however, provides a rare glimpse of how Afghan experts view the status of US efforts to train and arm Afghan defense forces:

Experts feel that due to lack of proper training and shortage of equipments the Security Forces are not able to fight the insurgents in an effective manner, leading to an increased casualty figures.

Several MPs also expressed their concerns over the increasing casualties within the Afghan police forces.

“Afghanistan’s government should work on a plan to reduce police force causalities. Several lives are lost due to lack of proper training and equipment,” said MP Sediq Ahmad Osmani.

Over the past 11 years, one of the aims of the international community was to build a powerful and self-sufficient military force in Afghanistan. There are over 350,000 Afghan security personnel who will take charge of complete security responsibilities from the foreign troops by the end of 2014.

As other explanations of why the US must remain in Afghanistan have faded away, the mission to train and equip Afghan forces to take on responsibility for their own security has stood as the only remaining justification for several years. Despite all those years and all those billions of dollars squandered, the security situation is getting worse and not better. And the reason security is deteriorating is because despite all that training and equipping we claim to have done, Afghan forces remain too poorly trained and too poorly equipped to take on the job we have been preparing them to assume. Does the US really believe that with “just one more year” the deficiencies in training and equipping can be overcome?

The time to hit the zero option is now. There is no need to wait another year while the situation only gets worse.