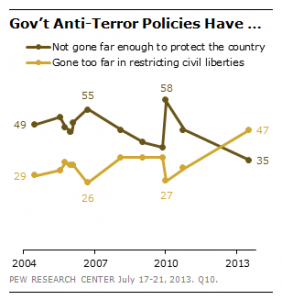 You may have seen that a Pew poll shows, for the first time, more people think the government has gone too far in restricting civil liberties than think it has not gone far enough to protect the country. (Another poll had a similar finding just after the Boston Marathon attack.)

That said, even with concerns about civil liberties, 50% of those polled approve of the collection in the name of terrorism, while 44% disapprove.

While I’m heartened that the country has finally started expressing some concern about civil liberties, I think a detail of the Pew poll is worth noting.

A big chunk of Pew’s readers seem to have a more accurate understanding of the program than Pew’s pollsters. 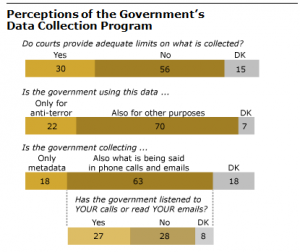 Consider two of its three headline findings: that 70% use data for purposes other than terrorism and that 63% believe the government is collecting more than metadata.

Just your impression, does this government program only collect data such as phone numbers and e-mail addresses, or is it also collecting what’s actually being said in the calls and e-mails?

The thing is, both of these questions are true: The government collects content under Section 702, including the incidentally collected content of Americans (which they can go back and search on later). And the 702 program collects information for counter-proliferation, cybersecurity, and other foreign intelligence purposes (the metadata program is reportedly limited to terrorism … if you believe all of Iran is a terrorist organization).

That said, only some of the “other purposes” Pew readers cited — such as gathering information for other crimes, and for national security — match the ones the government admits to. They also name political targeting and general control.

But Pew’s report suggests those who thing the government is collecting content are wrong.

And despite the insistence by the president and other senior officials that only “metadata,” such as phone numbers and email addresses, is being collected, 63% think the government is also gathering information about the content of communications – with 27% believing the government has listened to or read their phone calls and emails.

Perhaps the headline of this study ought to be, 70% of Pew’s respondents not snookered by the metadata claim, unlike Pew?