Keith Alexander: We Report Violations to “Everyone”

At 32:14 in his speech to BlackHat yesterday, Keith Alexander said of the Section 215 dragnet,

We comply with the court orders and do this exactly right. And if we make a mistake, we hold ourselves accountable and report it to everyone.

Here’s what the 2011 report on both the telecom and Internet dragnets declassified yesterday said about NSA’s compliance failures (see PDF page 8). 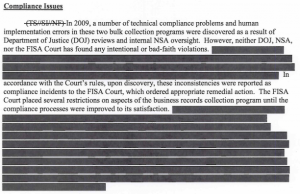 By “everyone” Alexander appears not to include “citizens and taxpayers.”

As I reported Friday, Ron Wyden and Mark Udall say the Intelligence Committee downplays the seriousness of the violations that have occurred.

Their violations of the rules for handling and accessing bulk phone information are more troubling than have been acknowledged and the American people deserve to know more details.

I am not allowed to discuss the classified nature of that, but I want to make sure those who are following this debate know that from my vantage point, reading those documents that are classified, these violations are more serious than have been stated by the intelligence community, and in my view that is very troubling. So I do hope Senators will go to the Intelligence Committee and ask to see those classified documents because I think when they read them–I think they will come to the conclusion to which I have come that, not only is what was stated by the Director of National Intelligence in that letter that was sent to you and me and Senator Udall and 23 other Senators–not only was that correct, but I think Senators who read those classified documents will also come to the conclusion that the violations are more serious than they thought–than the intelligence community portrayed.

CNBC: General Alexander, Senator Wyden said yesterday that phone records collection abuse has been more significant than the government has acknowledged. What do you say about that?

Alexander: I’m not sure what he’s referring to, so I don’t know without him being more specific. If he could be. I think, um, maybe we should have a discussion on what that means.

(Alexander went on to provide actual specifics about what “everyone” means, though he did not explicitly admit it doesn’t include “everyone.”)

I’m not actually sure where that “if he could be” fits syntactically in Alexander’s response. But here’s why Wyden can’t provide more specifics.

But don’t worry. When they commit abuses, Alexander claimed, they tell “everyone.”

Later in the interview, Alexander told CNBC it could help.

Just reporting what somebody says is not the right thing to do for our country.

Let’s put the facts on the table. If you just blindly take what somebody says, I think that’s not what our nation needs.

Yet blindly taking what somebody says about government abuse is precisely where Alexander and Clapper have left American citizens.