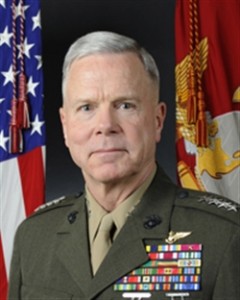 And just what did Amos say to cause the problems? Try this:

Amos used his tour to stress his own strong feelings about the 348 reported sexual assaults in the Marine Corps last year. In a roughly 75-minute talk intended for every Marine non-commissioned officer and officer, the career aviator demanded tougher punishment for those accused of sexual misconduct.

“Why have we become so soft?” Amos asked in a speech April 19 at Parris Island.

He further described himself as “very, very disappointed” in court-martial boards that don’t expel those who misbehave sexually, and he denounced as “bullshit” claims that many sexual assault allegations amount to second thoughts from individuals who initially consented.

“I know fact from fiction,” Amos declared, a transcript of his April 19 speech shows. “The fact of the matter is 80 percent of those are legitimate sexual assaults.”

Put another way, the Marine Corps’ top officer was telling his subordinates that 80 percent of those charged with sexual assault were guilty. He was demanding dismissals from the service, and suggesting that an alleged victim might be simply suffering from, as he phrased it, “buyer’s remorse.”

But the sexual assault cases aren’t the only front where Amos has appointed himself as judge and jury. The high profile case in which soldiers were seen on video urinating on the corpses of insurgents they had killed certainly called for aggressive prosecution. But Amos clearly crossed the line again in how he went about calling for prosecutions:

The Marine Corps dropped the criminal charges filed against the only officer implicated in the video depicting Marines urinating on dead insurgents in Afghanistan, but he will still faces possible involuntary separation from the service.

Clement’s defense team had been preparing for a court-martial scheduled in November, and maintained that he did nothing wrong that day. They expected to hear testimony on Sept. 11 at Camp Lejeune, N.C., from Col. Jesse Gruter and Maj. James Weirick, two Marine staff judge advocates who have raised repeated concerns about unlawful command influence by senior officials at Marine Corps headquarters in all of the urination cases.

Weirick filed an explosive inspector general complaint in March that accused Commandant Gen. Jim Amos, or others acting on his behalf, of deliberating and unlawfully seeking to exert influence on the cases of Clement and the seven other Marines who faced disciplinary action following the investigation. Weirick, acting as a whistle-blower, also alleged that senior Marine officials sought to cover up their involvement in the cases.

The Corps’ controversial handling of the legal cases has generated interest in the national media, on Capitol Hill and across the Corps. Clement’s lawyers filed a motion in July to dismiss his case on the grounds of unlawful influence. The motion included a signed declaration from Lt. Gen. Thomas Waldhauser, who acknowledged that he was removed as the consolidated disposition authority overseeing all the legal cases after he had a disagreement with the commandant over how much punishment was warranted. The commandant told Waldhauser he wanted all of the Marines involved “crushed,” the three-star general’s declaration states.

Hmmm. A Marine Corps Commandant who appoints himself as judge and jury in multiple cases while even removing prosecutors with whom he disagrees might be in line for facing some “responsibility and accountability” of his own. I won’t hold my breath waiting for it to happen, though.