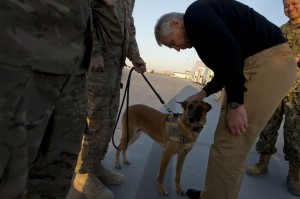 It’s hard to imagine how Defense Secretary Chuck Hagel’s travels this week could have gone any worse. Starting off with horrible optics, Hagel began his trip with a stop in Bahrain. Although it appears that he at least had enough sense not to appear in front of the cameras with him, he did meet with Bahrian’s king even though the country continues a brutal crackdown on protests, in which mass punishment and torture by the king’s forces have been documented as ongoing. Hagel did appear in front of the cameras though, to “share a laugh” with Egypt’s foreign minister (see this photo essay and scroll down) while in Bahrain, so he did manage a public appearance with a regime engaged in violent suppression of its people.

Hagel moved on to Afghanistan. The US press had already warned us ahead of the visit that he and Karzai were not scheduled to meet even though the US is in the midst of applying incredible amounts of pressure to convince Karzai to sign the Bilateral Security Agreement by the end of this year. Or perhaps by the NATO meeting in February. Or whenever. Not content to settle for a mere snub, though, Karzai went a step further in his disrespect to Hagel. Under a story with the headline “President Karzai Leaves for Iran, While Hagel Still in Kabul“, Tolo News informed us yesterday of Karzai’s latest move:

Karzai is visiting Iran to negotiate with Iranian officials on bilateral relations between Tehran and Kabul, the Presidential Palace said in a statement.

It appears that Karzai was treated quite well in Tehran:

And RT informs us that a security deal between Iran and Afghanistan now appears likely (h/t to Greg Bean for alerting me to this link via Twitter).

Think about that. Hagel came to Afghanistan with no Karzai meeting arranged and then while he was there, Karzai went to Tehran and announced a pending agreement. It can’t get much worse than that.

Or can it? Hagel’s next stop was Pakistan. He met with Prime Minister Nawaz Sharif, where Sharif told him that drone strikes must stop. But while Hagel was there, the US “announced” that NATO shipments through Pakistan would resume since protests against drones have stopped. From the same Express Tribune article about the meeting with Sharif:

But a US defence official told reporters in Kabul that the suspension of shipments via Pakistan had been lifted because the protests had stopped, removing the threat to Nato trucks that move through the Torkham gate pass.

Except that the protests have not stopped. So it appears that the US withdrew that statement. From Dawn:

The visit came as Hagel’s deputies withdrew Sunday’s statement that said Nato shipments out of Afghanistan through Pakistan were to resume due to the end of anti-drone protests.

And as an added bonus, we have yet another incident of NATO supply trucks using the southern route in Afghanistan being attacked, so perhaps pressure is being ratcheted up on that route as well.

Perhaps it is time for Mr. Hagel to come home.