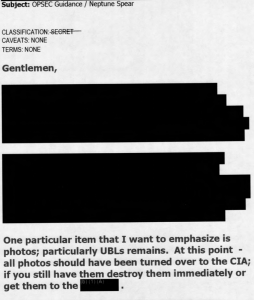 As I was the first to note back in June, McRaven ordered that all photos in JSOC’s possession should be purged. According to the IG Report where I first noted that order, he ordered them be sent to CIA (the final IG Report censored that reference). I thought at the time (and still believe) it was an attempt to jurisdictionally sheep dip the pictures, just as the operation had been, to get further protection for the pictures.

It’s only now, after Judicial Watch lost their suit to obtain these photos, that DOD has gotten around to providing this document that makes it clear McRaven ordered the photos not just purged, but “destroyed” after the Judiical Watch request.

It’s all so familiar!