The Decline and Fall of the Bo Merlot Empire

There was once upon a time a great band of Wolverine warriors who prowled a region of earth known as The Big Mitten. Proud and fierce, they were led by a god like creature known as Bo. Merlot that is. Three yards and a clod of sod Schembechler. A fine wine was named in honor of the great god Bo. They were hailed as victors far and wide, everywhere they went. Except the Rose Bowl of course, that rarely worked out very well because, you know, PAC teams can actually pass the football.

Anyhoo, enough about ancient history, let us talk about the present. It is bleak. In Ann Arbor, the locals no longer bother with chattering about great wars with the hated Tattooed SweaterVests of Ohio State, for they must spend all their time hiding from their in state Sparty neighbors in green. Green is good, unless you are Blue. You see, the Green Meanie Spartys are 5-1 against the Michigan Men in the last six years, and are looking to get their swerve on yet again today in East Lansing. And Sparty is, frankly, starting to get bored. When asked this week about the looming battle for the coveted “Paul Bunyan Trophy“, pretty much all Michigan State coach Mark Dantonio could muster (apparently while yawning) was:

We have to keep our edge regardless of who we play. If we can’t do that, then we’ve not succeeded. 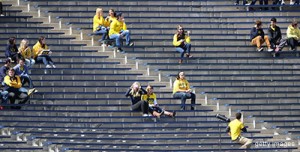 Ooof. Brutal. But, well, what is he supposed to say? The Wolverweenies have not scored a touchdown on Michigan State in the last two years, and last year Michigan rolled up an impressive negative 48 yards rushing for the game. And that was in Ann Arbor, today Sparty is eighth ranked and home cooking. Brady Hoke is right about one thing, this is not Devin Gardner’s problem. The problem at Michigan is far greater than that, it is systemic, and it appears to go all the way up to state Republican apparatchik Dave Brandon, who is the current athletic director. There won’t be a riesling, much less a merlot, named for Dave.

Which leads to the question asked by Marcy, who will fire old and hire new, coaches sooner, Michigan or the Florida Gators? Great question. My guess goes to Florida because I think they are more stable at the athletic director position. Michigan has issues across the board at this point. Jim White can flesh out the Gators’ details further, but things are not good in Gainesville with Will Muschamp either. I kid a lot about both of these programs, but it really is sad. Football is infinitely better when these storied programs are healthy and not woebegone.

Okay, let’s take a brief look at other things sporting in the news. The Royals last night stole a win in San Fancisco to go up 2-1 in the World Series. Ratings for this series are in the dumper, but I cannot fathom why. These are both compelling teams, and the series itself seems great. The Giants are a close to a dynasty as there is in baseball the last decade, and the Royals were once glorious and are finally back on the big stage. That is good stuff, and worth watching.

In the student athlete portion of this weekend’s schedule, apart from the Paul Bunyan fest in East Lansing, ‘Ole Miss at LSU and South Carolina at Auburn could both be surprises and look worth a look. USC at Utah is another upset special in the making. The Trojans are up and down this year, but Cody Kessler is running up impressive quarterback numbers along the way, and Utah can be thrown on. But Utah can score too, and they are always tough as nails in Rice Stadium. I have actually been to Rice Stadium by the way, but it was for a Rolling Stones concert, which was plenty proof the joint can rock. On a more sober note, I hope USC pulls off a big win because the Trojans are the team of my friend Kevin Drum, and life has dealt him a very bad card. Marcy and I have been together at this blogging thing a long time now, but long before that, Kevin became one of the first people in the blogosphere I came to know and interact with off blogs. He is a prince of a man, and I send him all my best wishes, and hope you will too.

In the professional football sporting side of things there is much ado about something. First off, in the supposedly game of the week, closest pairing evah etc Thursday night tilt between the Donkos and Bolts, ‘ole Noodle Armed Washed Up Lemon Sucking Face Peyton Manning skewered San Diego. Denver better find a way to sign and lock up BOTH Thomases, Julius and Demaryius, because Peyton looks like he easily has another 2-3 years in him. And those three are magic together. Can the Bungles rebound with a win over the Ravens home in Cinci? I wouldn’t bet on that; Flacco and the boys are on a roll. The Bills at Jets might actually be interesting. By the way, no, that is not a photo from Bill & Ted’s Excellent Acid Adventure there on the right, that is the Tennessee Titan’s new starting quarterback, Zach Mettenberger.

The three real games of the week are, however, Green Bay at the Saints and the Eagles at Arizona. Obviously I will be watching the latter, and think it ought to be a hell of an interesting game. The Iggles offense is, on paper, far more potent than that of the Cards. But this will be Carson Palmer’s second week back from his shoulder nerve injury and Larry Fitzgerald has mad a career of going wild on the Philadelphia defense over the years. So, the offenses may be a wash. Right now, the Cards’ defense seems to be the better of the two and, therefore, and I KNOW I will regret this, I think the edge has to go to the Cards at home. Lightening will strike me down for that I am sure.

Okay, that is it for this week’s trash talk, whoop it up people. Music this week by the great Mose Allison. On a melancholy music note, it has just been announced that Jack Bruce, the great bass player for Cream, has passed away. In his honor, here is my favorite Jack Bruce/Cream song ever, SWLABR, which Bruce both wrote and sang. It has always been a little disputed what the title stood for, but I have always bought that it really was “She Was Like A Bearded Rainbow” instead of “She Walks Like A Bearded Rainbow”. Either way, RIP Jack.