US Pretends to End Combat Mission in Afghanistan 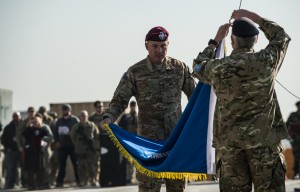 We need no other indicator of just how bad the situation in Afghanistan really is than that, with no previous announcement of the schedule that I am aware of, the US staged a ceremonial “end of combat operations” in Kabul today, more than three weeks before the December 31 scheduled end of the current NATO mission. The NATO mission is supposed to transition from a stated combat operation to one of support (as noted in its name: Resolute Support). We can only conclude that the date of the ceremony wasn’t announced because it would become an obvious target for the increased number of Taliban attacks in Kabul and throughout Afghanistan.

But like most of what the US says and does in Afghanistan, this was all really just bullshit. In a visit to Kabul on Saturday, which, like today’s ceremony also was unannounced due to the horrid security situation in Afghanistan, outgoing Defense Secretary Chuck Hagel admitted that the non-combat designation for US troops in Afghanistan from 2015 onward is in name only. First, the claim of support:

“As planned, Resolute Support will focus here in Kabul and Bagram with a limited regional presence,” he said. “As part of this mission, the United States is prepared to provide limited combat enabler support to Afghan forces.

See? Right there, he says we only are there to enable Afghan troops to take part in combat.

Hagel said U.S. forces in Afghanistan would “always” have the right and the capacity to defend themselves against attacks.

“We’re committed to preventing al Qaeda from using Afghanistan as a safe haven,” Hagel said, to threaten the United States, the Afghan people, and other U.S. allies and partners.

Also, the United States will take appropriate measures against Taliban members who directly threaten U.S. and coalition forces in Afghanistan or provide direct support to al Qaeda, he added.

Oh. So we are “only” combat support, unless we decide we aren’t and that there are targets we need to hit because they pose a threat to us.

And why are our troops there threatened? Simply by being there:

Yet Obama’s decision to allow American forces to remain behind in a more active role suggests the U.S. remains concerned about the Afghan government’s ability to fight. Chances of Ghani restarting peace talks with the Taliban also appear slim as he signed agreements with NATO and the U.S. to allow the foreign troops to remain behind — a red line for the militants.

Taliban spokesman Zabihullah Mujahid told the AP that the group would continue to fight “until all foreign troops have left Afghanistan.”

“The Americans want to extend their mission in Afghanistan, the motive being to keep the war going for as long as possible,” Mujahid said. “And for as long as they do, the Taliban will continue their fight against the foreign and (Afghan) government forces.”

And there we have it. The Taliban and US troops continue their sick cycle of co-dependency. The Taliban will fight us as long as we are there, and we refuse to leave while they still want to fight us.