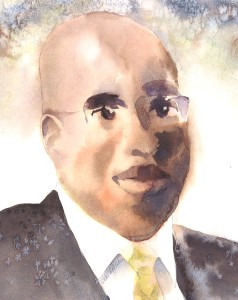 Martha Lutz, the CIA’s Chief of Litigation Support and the bane of anyone who has FOIAed the CIA in the last decade, was on the stand, a tiny woman with a beehive hairdo and a remarkably robust voice. After having Lutz lay out the Executive Orders that have governed classified information in the last two decades and what various designations mean, the government introduced four documents into evidence — three under the silent witness rule — and showed them to Lutz.

“They were,” Lutz responded. [update: the transcript reflects Lutz saying these were properly classified secret]

A court officer handed out a packet of these same documents with bright red SECRET markings on the front to each juror (the government had tried to include such a warning on the binders of other exhibits, but the defense pointed out that nothing in them was actually classified at all). Judge Leonie Brinkema, apparently responding to the confused look on jurors’ faces, explained these were still-classified documents intended for their eyes only. “You’ll get the context,” Judge Brinkema added. “The content is not really anything you have to worry about.” The government then explained these documents were seized from Jeffrey Sterling’s house in Missouri in 2006. Then the court officer collected the documents back up again, having introduced the jurors to the exclusive world of CIA’s secrets for just a few moments.

On cross, however, the defense explained a bit about what these documents were. Edward MacMahon made it clear the date on the documents was February 1987 — a point which Lutz apparently missed. MacMahon then revealed that the documents explained how to use rotary phones when a CIA officer is out of the office. I believe the prosecution objected — so jurors can’t use MacMahon’s description in their consideration of how badly these documents implicate Sterling — but perhaps the improper description will help cue the jurors’ own understanding about what the documents they had glimpsed were really about, making it clear to them they’re being asked to convict a man because he possessed documents about using a rotary phone that the CIA retroactively decided were SECRET.

Along with these awesome secrets about rotary phone usage, the prosecution noted that Sterling also had a 1993 performance evaluation at his home in Missouri. Under cross, MacMahon got Lutz to correct her testimony that this PAR was not from when Sterling was a Case Officer — as she had originally explained — but from when he was a trainee. But Lutz insisted that the document would still have been secret if not redacted anyway because it would reveal the kind of trainees the CIA looks for.

You might be wondering how the government plans to use retroactively classified documents about rotary phones to convict Jeffrey Sterling for leaking details about an operation dealing nuclear blueprints to James Risen. Luckily, the government explained all that back in September 2011.

Remarkably, they argue that these documents seized from Sterling’s house in Missouri in 2006 are proof that he possessed classified documents in his house in Herndon, VA in 2003.

Along with the FBI’s Agent’s hairdresser’s testimony, the government is offering these documents as “proof” that they’ve properly charged Sterling in Virginia and not, say, Missouri, where a judge is less likely to permit the government to wave around documents on rotary phones as if they’re an important secret.

The government also introduced these documents about rotary phone usage because — they readily admitted in that September 2011 motion —  that they were forced to do such things because they only have a circumstantial case showing that Sterling had a letter that got leaked to James Risen absent the journalist’s testimony (they submitted that motion at a time when Brinkema had limited Risen’s testimony).

In other words, they’ve submitted these documents Sterling obviously got in the very early days of his CIA career to “prove” that he also had snuck a letter on the Merlin program out of the CIA in 2000 (after which point he lost access to the information) and sat on it until 2003, when he allegedly shared it with Risen.

That the government is doing so makes it all the more ridiculous that a number of CIA’s witnesses — including up to four who were themselves cleared into the Merlin program — were able to testify without answering questions about the classified documents they improperly brought home. Given that the CIA actually learned of those documents in real time, it’s likely they were a lot more interesting than instructions on how to dial a rotary phone. And following the government’s habit of making fevered inferences, their improper treatment of classified information should make them more likely candidates to be James Risen’s source than Jeffrey Sterling.

But instead, the government is arguing, in all seriousness, that Jeffrey Sterling should go to prison because of three documents on dialing a rotary phone dating to 1987.

tweets from our circle
Ed Walker 🍞🌹💉💉@MasaccioEWRT @tribelaw: I know this is stupid, vapid, empty, silly stuff. But I couldn’t resist RT-ing it23 minutes ago05 February 2023
emptywheel@emptywheelRT @MarkHamill: "Great shot, kid... that was one in a million!"1 hour ago05 February 2023
Ed Walker 🍞🌹💉💉@MasaccioEWRT @MuellerSheWrote: The obvious reason Donald didn’t shoot down the Chinese spy balloons while he was president is because he and his fami…2 hours ago05 February 2023
bmaz ( @[email protected] )@bmazRT @laRosalind: @bmaz see this?! holy fuck doesn't even begin...3 hours ago05 February 2023
Jim White@JimWhiteGNVRT @bmaz: @JimWhiteGNV @ptoemmes @laRosalind This is important. The last time I heard about a Komodo, it bit Sharon Stone's husband. http…2 days ago03 February 2023
Jim White@JimWhiteGNVThe Kamado has left the building! @ptoemmes @bmaz @laRosalind pic.twitter.com/Zl84eb9xq12 days ago03 February 2023
Ebola Outbreak Finally Receding in Sierra Leone; CDC Modeling Was Incredibly... Afghan Cabinet: Nominate First, Screen Later
Scroll to top