Mankiw’s Principles of Economics Part 9: Prices Rise When the Government Prints Too Much Money

Mankiw’s ninth principle of economics is: Prices Rise When the Government Prints Too Much Money. He describes hyperinflation in the Weimar Republic in Germany in the early 1920s. The US hasn’t experienced hyperinflation, but it has had problems with inflation, as in the 1970s. He says that inflation imposes costs on societies, so a goal of policymakers is to keep it under control. He tells us the cause of inflation:

As stated, this principle doesn’t sound quite right. In the US, at least, the government doesn’t print money, as we found out in the uproar over the Trillion Dollar Coin. That idea brought out the flying monkeys, shrieking that it would be wildly illegal for the Treasury to mint money other than small coins. According to Mankiw, in the US substantially all money is created by banks, as he explains in Chapters 16 and 17. He gives the standard description of fractional reserve banking. He explains that the Federal Reserve Board can add to bank reserves, thus creating the possibility of new loans that will create new money, or reduce reserves, reducing the ability of banks to create new money. These tools enable the Fed to control the money supply. He acknowledges that there are serious difficulties facing the Fed in exercising that control, but he claims it can be done as long as the Fed is “vigilant”. Chapter 16, page 339. With this explanation, it is not clear why Mankiw claims that government is responsible for inflation by printing too much money.

I’m also not sure what to make of Mankiw’s claim that the inflation of the 1970s was associated with a “rapid increase in the quantity of money.” Here’s a chart showing the growth of M2 for the period 1965 through 1985. It looks like it is rising, a bit faster after each recession (grey bars). It looks to me like the next chart, gross domestic product over the same period seasonally adjusted. Perhaps there is some other factor, or maybe I’m just reading this wrong. 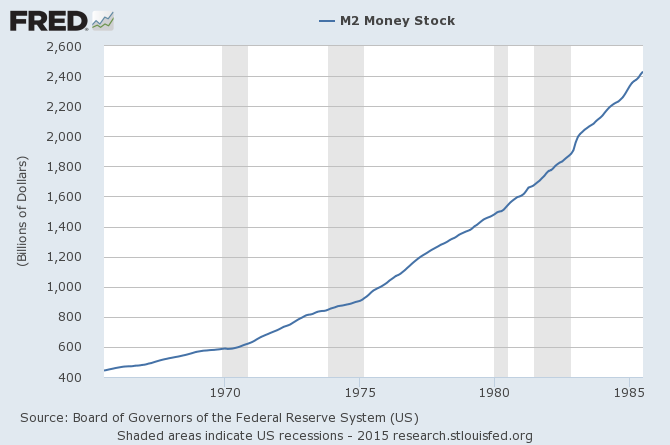 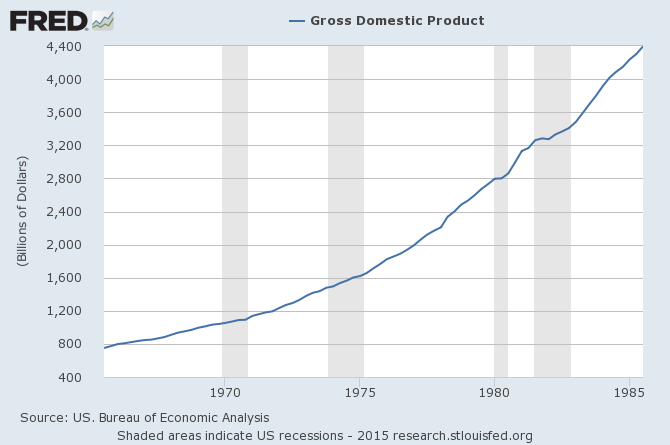 Here’s a chart of M2 from 2000 to the present. There is a noticeable increase in the rate of growth of the money supply in the immediate wake of the Great Crash, leveling off in March 2009. Starting about August 2010, the increase is again greater than in the pre-Crash years. These rapid increases in the money supply match up with the Fed’s Quantitative Easing programs. It has not, as many economists (not Mankiw) predicted, led to rapid inflation. 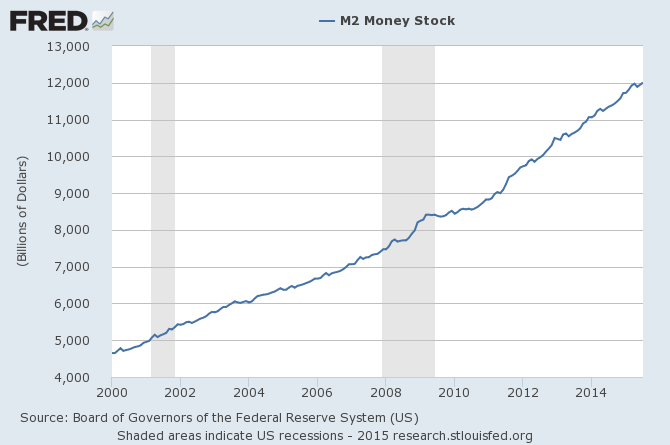 That points us to the central question raised by the principle: how much money is too much? If Principle 9 were a scientific principle, we could use it to work out an equation for the correct amount of money, either empirically or theoretically. Mankiw doesn’t offer either. Instead, he has a section explaining the debate between those who think the Fed should have discretion and those who think the Fed should follow a strict rule, like increasing the money supply by 3% per annum. P. 520. It isn’t much of a principle if it doesn’t lead anywhere, and doesn’t predict anything.

Mankiw’s phrasing, blaming the government for inflation because of its intervention with the operation of markets, fits nicely with Mirowski’s 10th Commandment: Thou Shalt Not Blame Corporations and Monopolies. It supports Mirowski’s Third Commandment, calling for full reliance on the marvelous market and making sure governments don’t interfere. We get a good look at this in a recent paper by Thomas Palley who has been writing about neoliberalism for some time, titled The US Economy: Explaining Stagnation and Why It Will Persist. Palley says that there are three explanations for the Great Crash.

1. The hardcore neoliberal explanation: it was all the fault of the government. Interest rates were forced too low for too long in the wake of the 2000 recession, interfering with the market for money. For purely political reasons, the government intervened in the housing market to encourage increased homeownership, leading to misallocation of scarce financial and other resources. This is the position of Peter Wallison of the AEI, whose dissent from the Final Report of the Financial Crisis Inquiry Commission explains this view. It is not recommended reading.

2. The softcore neoliberal explanation: it was the fault of government regulators. The regulators allowed excessive risk-taking by lenders, and perverse incentive pay structures in the financial sector. They allowed deregulation to proceed too far. That enabled bad allocation of the flood of foreign savings into an overblown housing sector. When it popped, the resulting financial disorder deepened a structural business cycle recession into a near depression.

3. The Keynesian explanation: neoliberalism did us in. The explanation is that neoliberal policies destroyed the institutions and rules that kept corporate greed in check and made sure that the benefits of a growing economy were shared between capital and labor. In the end, consumer demand was crushed by inadequate wages. It slowed to the point that it could not drive economic growth as it had during the period 1950-75. As incomes dropped, debt rose, so that when the Great Recession hit, there was no demand left to drive a recovery. The cycle of jobless recoveries has come to the point that stagnation is the plausible future for the US economy.

Mankiw argues for neoliberal explanations and solutions and certainly not the Keynesian explanation or its solutions. For example, in October 2008, he wrote that the Great Depression was largely cured by monetary policy, and pointed to studies saying that New Deal legislation like the expansion of labor rights was counter-productive because it allowed labor power to interfere with market forces.

I don’t doubt that the quantity of money might have something to do with inflation in some cases. I’m not convinced that it explains either the inflation of the 1970s, the lack of inflation in recent times, or the current inflation in Russia.