The Deflategate Decision: Brady Has Been Freed! 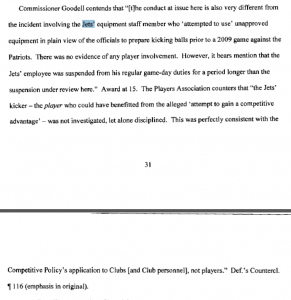 emptywheel sez: We interrupt this in depth legal discussion to point out that the WOLVEREENIES ARE BACK!!

Better still, they’ve got unbeatable juju going into tonight’s game against Utah. That’s because (unreported among all the other less important Deflategate legalisms) the Wolvereenies have ALREADY worked together to score today.

You see, Jay Feely and Tommy Brady combined to score a point in Judge Berman’s decision today. On Monday, former UM kicker Jay Feely ’99 testified on behalf of former UM QB Tom Brady ’00 (just like me!!!). Feely explained about how when the Jets got busted for fucking with their balls in 2009 — in a game against Division rivals the Pats, against Tom Brady — he, the kicker who allegedly benefitted from the improperly doctored balls, faced no punishment.

If you’re not going to punish Jay Feely, Judge Berman suggested, you can’t punish Tommy Brady. At least, you can’t expect Tommy to think he’ll get punished, because his college buddy didn’t in the equivalent situation.

Anyway this is surely a great omen for the Wolverines and their new savior Jim Harbaugh. 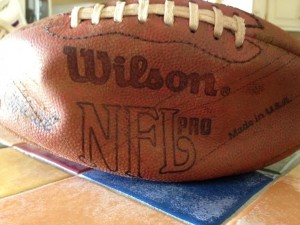 Well, at long last love, the #Deflategate decision from Judge Richard Berman in SDNY is in, and the big winner is Tom Brady.

The 40 page full decision is here

One key line in the decision on the general right of the court to set aside an arbitration is:

“The deference due an arbitrator does not extend so far as to require a district court to countenance, much less confirm, an award obtained without the requisites of fairness or due process” (citing Kaplan v. Alfred Dunhill of London, Inc.)

I previously did a very partial background on the case, and how it germinated from blatantly false information (still uncorrected and/or withdrawn) from Chris Mortenson and ESPN. The bottom line is the NFL’s position was that the Commissioner, Goodell, simply has the power to do whatever he wants under Article 46 of the NFL/NFLPA collective Bargaining Agreement (CBA).

2) That there were not adequate and reliable standards for testing game balls, and therefore punishment based on the same is unreasonable

3) That Goodell was a blatantly partial arbitrator, and

4) That the arbitration process lacked fundamental fairness in that key witness testimony and evidence was unreasonably denied to Brady and the NFLPA (See here for a further explanation).

Frankly, Brady is arguably entitled to a decision in his favor on all four. What Berman did is, primarily, rely on the first ground, notice with a backup of ground four, lack of fairness from denial of the Pash testimony and investigative notes. 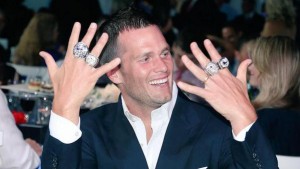 The critical language from the decision is:

The Award is premised upon several significant legal deficiencies, including (A) inadequate notice to Brady of both his potential discipline (four- game suspension) and his alleged misconduct; (B) denial of the opportunity for Brady to examine one of two lead investigators, namely NFL Executive Vice President and General Counsel Jeff Pash; and (C) denial of equal access to investigative files, including witness interview notes.

So, there you have it, please feel free to unpack this further in comments. This is a momentous decision, not just for Brady and the NFL, but, as I explained in my earlier post, for collectively bargained labor in general. There is a lot of importance here to much more than Tom Brady. Though Brady is certainly the big winner today.

Brady is free! For now anyway, it is nearly a certainty that the NFL will appeal to the 2nd Circuit and we will go through this all again.