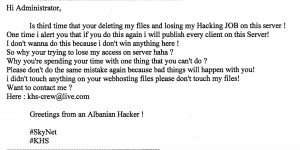 The FBI just charged an Albanian hacker living in Malaysia, Ardit Ferizi, aka Th3Dir3ctorY, with stealing the Personally Identifiable Information of over 1,000 service members and subsequently posting that PII online to encourage people to target them (he provided the data to, among others, Junaid Hussain, who was subsequently killed in a drone strike).

Given Jim Comey’s repeated warnings of how the FBI is going dark on ISIS organizing, I thought I’d look at how FBI found this guy.

In other words, Ferizi apparently did nothing to hide the association between his public Twitter boasting about stealing PII and association with KHS and the hack, down to his repeated email nudges to the victim company (and his attempt to get 2 Bitcoins to stop hacking them). His Twitter account, Facebook account, and email account could all be easily correlated both through IP and name, and activity on all three inculpated him in the hack.

The only mention of any security in the complaint is that Bitcoin account.

Sure, Ferizi was not playing the role of formal recruiter here, but instead agent provocateur and hacker. Still! The FBI is billing this guy as a hacker. And he did less to protect his identity then I sometimes use.

At least in this case, FBI isn’t going dark on ISIS’ attempts to incite attacks on Americans.