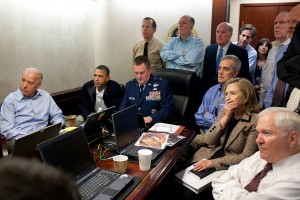 There’s a name missing from Charlie Savage’s latest — a description of the legal analysis behind Osama bin Laden’s killing: Caroline Krass, who served as Acting Head of DOJ’s Office of Legal Counsel from January to September 2011. She’s not mentioned, apparently, because she was not among the four lawyers who collaborated on five memos deeming the raid to be legal.

Weeks before President Obama ordered the raid on Osama bin Laden’s compound in May 2011, four administration lawyers hammered out rationales intended to overcome any legal obstacles — and made it all but inevitable that Navy SEALs would kill the fugitive Qaeda leader, not capture him.

Just days before the raid, the lawyers drafted five secret memos so that if pressed later, they could prove they were not inventing after-the-fact reasons for having blessed it. “We should memorialize our rationales because we may be called upon to explain our legal conclusions, particularly if the operation goes terribly badly,” said Stephen W. Preston, the C.I.A.’s general counsel, according to officials familiar with the internal deliberations.

This account of the role of the four lawyers — Mr. Preston; Mary B. DeRosa, the National Security Council’s legal adviser; Jeh C. Johnson, the Pentagon general counsel; and then-Rear Adm. James W. Crawford III, the Joint Chiefs of Staff legal adviser — is based on interviews with more than a half-dozen current and former administration officials who had direct knowledge of the planning for the raid.

The account makes it quite clear that Eric Holder was excluded from discussions.

On April 28, 2011, a week before the raid, Michael E. Leiter, the director of the National Counterterrorism Center, proposed at least telling Mr. Holder. “I think the A.G. should be here, just to make sure,” Mr. Leiter told Ms. DeRosa.

But Mr. Donilon decided that there was no need for the attorney general to know. Mr. Holder was briefed the day before the raid, long after the legal questions had been resolved.

This means that on the OBL raid, Donilon excluded the Attorney General in the same way Dick Cheney excluded John Ashcroft from key information about torture and wiretapping. I find that interesting enough, given hints that Holder raised concerns about the legal authority to kill Anwar al-Awlaki in the weeks after we missed him on December 24, 2009, which led to OLC writing two crappy memos authorizing that killing in ways that have never been all that convincing.

But Savage provides no explanation for why Krass was excluded, which is particularly interesting given that the month after OBL’s killing, Savage revealed that President Obama had blown off Krass’ advice on Libya (as I read it, the decision to blow off her advice would have happened after the OBL killing, though I am not certain on that point). The silence about Krass is also remarkable given that she was looped in on the initial Libya decision — and asked to write a really bizarre memo memorializing advice purportedly given after the fact.

On Libya, Krass was looped in on questions addressing precisely the same issues addressed in the OBL killing (indeed, we were assassinating Qaddafi’s family members in Libya, which should have presented many of the same legal questions) both before and (as I understand it) after the OBL killing, but she was apparently not read in at all on the OBL killing itself.

There’s one more reason I think the question of OBL’s killing was more uncertain than laid out here. Savage reveals that even though lawyers had authorized not telling Congress about the raid, Leon Panetta did so on his own anyway.

Mr. Preston wrote a memo addressing when the administration had to alert congressional leaders under a statute governing covert actions. Given the circumstances, the lawyers decided that the administration would be legally justified in delaying notification until after the raid. But then they learned that the C.I.A. director, Leon E. Panetta, had already briefed several top lawmakers about Abbottabad without White House permission.

This is the action of someone — rightly — covering his ass, doing what the law actually requires rather than what his lawyer says it permits.

By the way, any bets on whether SSCI got a copy of that Preston memo, stating that they didn’t need to be informed on covert operations, contrary to the clear language of the National Security Act, before they approved his promotion from CIA General Counsel to DOD General Counsel (where he remains)? I bet no.

Ultimately, Savage depicts an Administration going even further than Cheney had on inventing legal authorizations for secret actions. Obama (and Donilon) will never catch heat for it like Cheney did, because everyone likes dancing on OBL’s watery grave. But make no mistake, this exhibits some of the same behaviors as we criticize Cheney for.

Update: I find this, from Savage’s June 2011 story on Krass, of particular interest given Savage’s description of the decision process on OBL.

The administration followed an unusual process in developing its position. Traditionally, the Office of Legal Counsel solicits views from different agencies and then decides what the best interpretation of the law is. The attorney general or the president can overrule its views, but rarely do.

In this case, however, Ms. Krass was asked to submit the Office of Legal Counsel’s thoughts in a less formal way to the White House, along with the views of lawyers at other agencies. After several meetings and phone calls, the rival legal analyses were submitted to Mr. Obama, who is a constitutional lawyer, and he made the decision.

A senior administration official, who spoke on the condition of anonymity to talk about the internal deliberations, said the process was “legitimate” because “everyone knew at the end of the day this was a decision the president had to make” and the competing views were given a full airing before Mr. Obama.