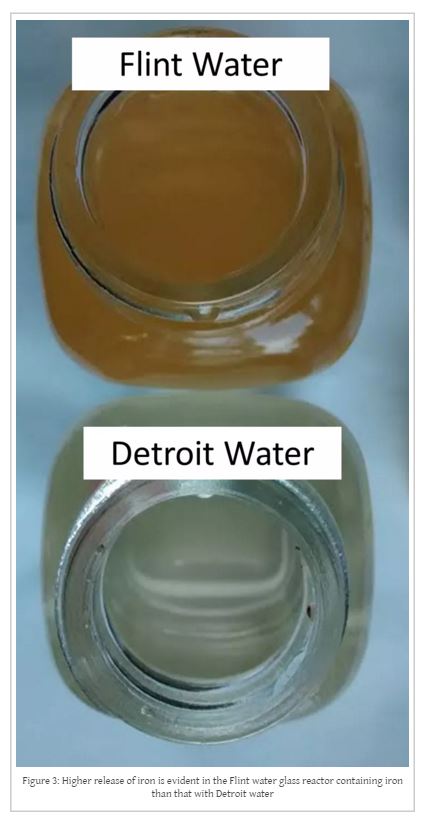 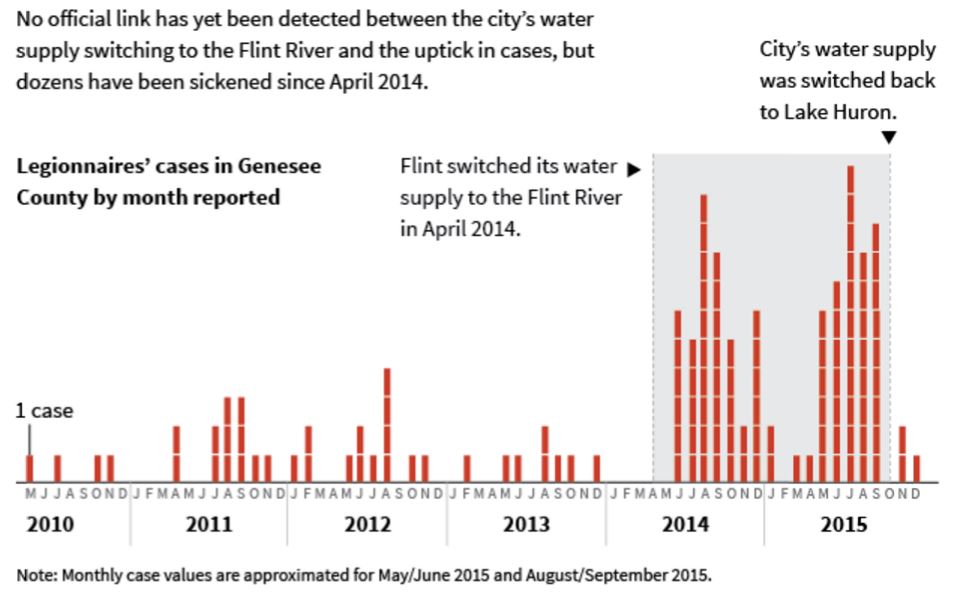 How could there be a pathway connecting the water source to a Legionnaires’ outbreak? After all, the original outbreak for which the disease is named was the result of Legionella growing in the cooling tower for the air conditioning system of a large hotel. The victims then inhaled the bacteria as aerosols that migrated into the ventilation system from the cooling tower. Note that the “cooling tower” is actually quite hot and one of Legionella’s distinctive characteristics is its love for elevated temperatures.

There is a further problem for how Legionella could have been in the water system. This study by the Edwards team showed that the standard test for bacterial contamination came up empty on Flint water. No coliform bacteria were found in Flint water collected at several sites, including from several homes.

This same study, however, found a huge warning sign. Although fecal bacterial contamination was not found, they found that many samples collected around town did not have any detectable levels of chlorine. Chlorine is needed in water systems to prevent growth of bacteria.

The August 24 study linked above went into further detail on this issue, where it was found that in the presence of iron, the corrosive nature of Flint water destroyed the chlorine that was present. This result leads to a very damning conclusion:

The high rates of iron corrosion from using Flint River water as a drinking water source are damaging the Flint distribution system. The corrosion is also causing chlorine to disappear quickly, which may make it more likely for harmful bacteria to grow in the water. Furthermore, it is possible that with the existing unlined iron pipe system in Flint, and the relatively low water demand (due to declining population, loss of GM – which used a lot of water – as a water customer, and high rates), that it will very difficult to meet Federal standards for minimum chlorine levels no matter what is done to treat the water.

So it turns out that although the Flint treatment plant treated the river water sufficiently to kill the coliform bacteria, once the water left the plant, its corrosive nature in iron pipes means that there would be no residual level of chlorine to retain antimicrobial activity. This is especially bad in an aging water system, as the residual chlorine level would protect against low levels of bacteria introduced by failures in backflow control or small breaches in the system where surface or groundwater might be introduced into the system. In this same report, Edwards provides a link to reports of increased rates of water main leaks and breaks in Flint’s aging system.

But when we move to consideration of Legionella, the situation gets much worse. Traditional water analysis for bacterial contamination, especially the fecal coliform test, would not reveal the presence of Legionella. The particularly difficult nature of culturing this bacterium led to prolonged confusion over the cause of the 1976 Philadelphia outbreak that gave the disease its name. So yes, Legionella likely would be eliminated just as the coliform bacteria were eliminated at the Flint treatment plant, but any Legionella introduced downstream could survive due to the low chlorine content. Further, Legionella would not be inactivated by the corrosive nature of the water. As for whether Legionella would be present in the region, consider that the disease Pontiac Fever (named for an outbreak in 1968) in also a Legionella infection that fortunately is less lethal. Pontiac is only 36 miles from Flint.

When we go to the literature on routes of Legionella infection, we have this from WHO (pdf):

The most common route of infection is the inhalation of aerosols containing the bacteria. Such aerosols can be generated by contaminated cooling towers, warm water showers, humidifiers and spas.

Warm water showers, huh? This gets even more interesting when we look at the temperature profile for Legionella survival and information on the proper setting for hot water tanks. Consider this little nugget from energy.gov:

Although some manufacturers set water heater thermostats at 140ºF, most households usually only require them to be set at 120ºF, which also slows mineral buildup and corrosion in your water heater and pipes. Water heated at 140ºF also poses a safety hazard—scalding.

Savings resulting from turning down your water heater temperature are based on two components: reduced standby losses (heat lost from water heater into surrounding basement area); and consumption (from water demand or use in your home). Set too high, or at 140ºF, your water heater can waste anywhere from $36 to $61 annually in standby heat losses and more than $400 in demand losses.

If you have a dishwasher without a booster heater, it may require a water temperature within a range of 130ºF to 140ºF for optimum cleaning. And while there is a very slight risk of promoting legionellae bacteria when hot water tanks are maintained at 120ºF, this level is still considered safe for the majority of the population. If you have a suppressed immune system or chronic respiratory disease, you may consider keeping your hot water tank at 140ºF. However, this high temperature significantly increases the risk of scalding.

And there we have it. A Flint home downstream of a discontinuity in the water system that introduces a small amount of Legionella would be at risk since the water would be likely to have insufficient chlorine to kill the Legionella. Further, if the household has its hot water tank thermostat set too low, the Legionella could thrive in the tank and then infect an immune compromised individual who inhales aerosols of the bacteria while showering.

MILive is now reporting that Legionella was found in the water supply of a Flint hospital in 2014, after the switch in the supply:

“After the City of Flint switched to the Flint River as its water source in April of 2014, we noticed an increase in the number of Legionella cases that were coming to McLaren for treatment, as well as those being reported across the county and at other hospitals,” McLaren spokeswoman, Laurie Prochazka said. “Because of that concern, and concern over the quality of water that we were receiving from the city, we began aggressively testing our water supply. An early test result indicated the presence of a low level Legionella.”