FBI’s Back Door Searches: Explicit Permission … and Before That

I have written numerous times about the timing of authorization for FBI to do back door searches. There’s a passage of the November 6, 2015 FISC opinion finding those searches to be constitutional that some have taken to clearly date the authority. But I believe the (unredacted sections of the) passage are being misread. 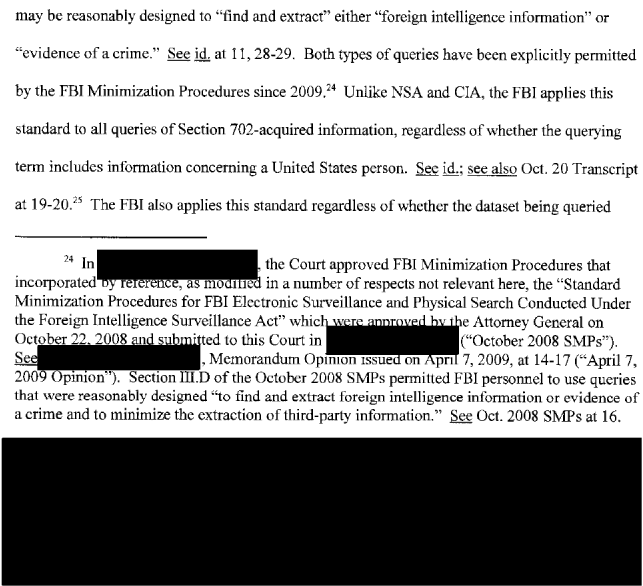 As the unredacted parts of the section make clear, queries for both foreign intelligence information or evidence of a crime “have been explicitly permitted by the FBI Minimization Procedures since 2009.” [my emphasis] The footnote goes onto describe how Minimization Procedures approved by Attorney General Mukasey on October 22, 2008 and submitted on some redacted date were approved by an opinion issued on April 7, 2009.

Already, that’s a curious set of details. If the minimization procedures were approved in October 2008, normally they’d be submitted close to right away, though it’s not clear that that happened. But why bother, given that FISC had just approved FAA certifications on September 4 (this timing resembles what had happened earlier that year, when the government significantly changed the program within days of getting certificates approved)?  In any case, James Clapper’s censors want to hide what those dates were. One likely reason they might have done so would be to hide the dates from defendants, including a few of the ones challenging 702. Another would be to obscure how the approval process went after passage of FISA Amendments Act, specifically given that the FISA Court of Review finalized its Yahoo opinion in August of that year, in which it relied on DOJ’s promise that “there is no database” of incidentally collected US person information.

But then there’s that redacted paragraph (the next footnote, 25, starts after it). Hogan adds something to his discussion beyond his description of the explicit approval of those minimization procedures.

As I have pointed out, Mukasey (writing with then Director of National Intelligence Mike McConnell, who would also have to approve any PRISM minimization procedures) made it clear in response to a Russ Feingold amendment of FISA Amendments Act in February of 2008 that they intended to spy in Americans under PRISM.

So it sure seems likely the Administration at the very least had FBI back door searches planned, if not already in the works, well before FISC approved the minimization procedures in 2009. That’s probably what Hogan explained in that paragraph, but James Clapper apparently believes it would be legally inconvenient to mention that.