How much more ironic could it be? More than 43 years after the last Americans evacuated Vietnam, ending our disastrous occupation there, the dateline reads Hanoi on President Barack Obama’s statement today on the US drone strike that killed Mullah Akhtar Muhammad Mansour. Mansour was the head of Afghanistan’s Taliban but was in Pakistan at the time the US killed him with a drone, striking a similarity to the US “secret” bombing of Cambodia during the Vietnam war.

From today’s New York Times, we have parts of Obama’s statement:

Calling the death “an important milestone,” President Obama said in a statement, released just as he was meeting with top officials in Vietnam, that the United States had “removed the leader of an organization that has continued to plot against and unleash attacks on American and coalition forces.”

“Mansour rejected efforts by the Afghan government to seriously engage in peace talks and end the violence that has taken the lives of countless innocent Afghan men, women and children,” Mr. Obama continued in the statement. “The Taliban should seize the opportunity to pursue the only real path for ending this long conflict — joining the Afghan government in a reconciliation process that leads to lasting peace and stability.”

So Obama is saying that the Taliban should respond to our extrajudicial killing of their leader by reconciling with the Afghan government (chosen in large part by John Kerry) and working toward peace. What are the odds of that happening? Max Abrahms has some very important points to make on that topic:

Dr Max Abrahms, from Northeastern University in Boston, said the US Government does not look carefully enough at the strategic implications of its strikes on extremist leaders.

He said he had done a number of studies on leadership decapitation of a militant group and he had not found a statistically significant reduction in the amount of violence perpetrated by the group after a leader was removed.

“In fact these decapitation strikes can actually be counter-productive, because one of the assumptions of the targeted killing campaigns is that the replacement of the leader that you killed will be more moderate,” Dr Abrahms said.

“And yet I find just the opposite to be true. The replacement is even more extreme.

“So for that reason, in the immediate aftermath of a successful targeted killing, like over this weekend, the group’s violence tends to become even more extreme, in the sense that it’s even more likely to attack civilian targets.”

And so our circle of irony is complete. Obama’s statement on the killing of Mansour, released from Vietnam, shows that US military misadventures still rely on faulty logic when major moves are made. A strike made to make the Taliban more peaceful seems virtually certain to result in more indiscriminate killing of civilians.

Because I know how much Marcy enjoys miraculous “left behind” documents, I couldn’t resist following up on a Twitter reference I saw flit by yesterday about how a passport for Mansour somehow survived the conflagration in the taxi in which Mansour met his death by drone. By following it, though, I found even more deep irony in the drone strike. This article by ToloNews carries a photograph of a pristine-looking passport. Compare that with the photo in the New York Times article linked above with the burned out wreckage of the vehicle Mansour was said to have been in when hit. How could the passport have survived?

But wait, there’s more! ToloNews tells us that the passport has Mansour’s name and carries a valid Iranian visa. Furthermore:

Meanwhile, a number of analysts said the Taliban in recent months tried to extend relationships with Iran and Russia to fight Daesh and that there is a possibility that Mansour traveled to Iran to escape ISI and talk with Iranian officials.

“Iran is afraid of Daesh presence in Afghanistan, because Daesh is an enemy to Iranian clerics; therefore, Iran wants to eliminate Daesh with the help of the Taliban. Previously, Taliban had strong affiliation to Saudi Arabia, but now there is a rift between Iran and Saudi Arabia and Iran wants to expand its influence on the group [Taliban],” political analyst Shafiq Hamdam said.

So while Mansour and his group have continued to reject peace talks with the Afghan government, at least some observers believe that he was in the process of trying to join the fight against Islamic State. And it may well be that he died because of that effort. Here’s a map of the region, showing that the site of the drone attack, Ahmad Wal, lies about 100 miles away from Quetta (where the Afghan Taliban has long been believed to be headquartered) along the highway that is the most direct route to Iran from Quetta. 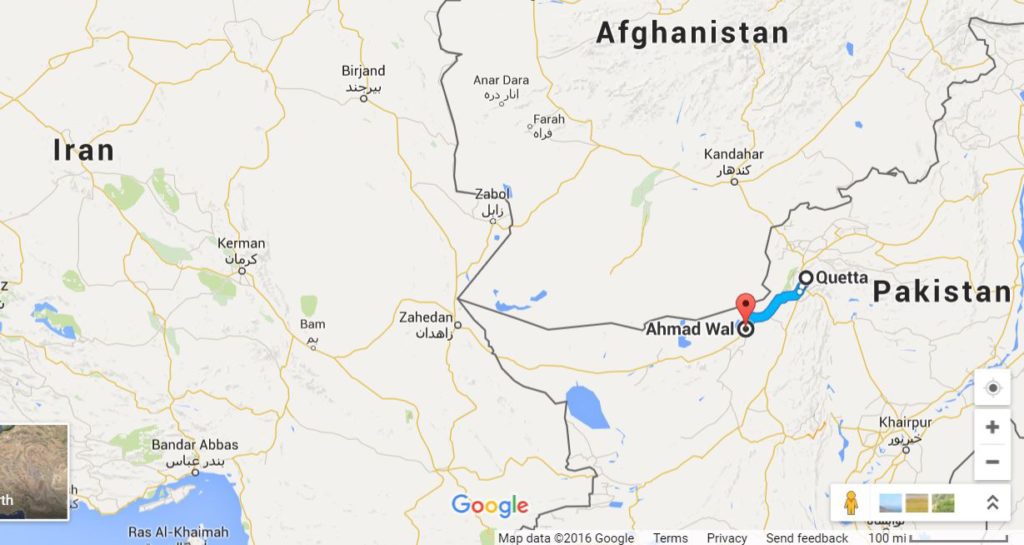 Google map of the region surrounding Ahmed Wal, where Mullah Monsour was killed.