What ever happened to the inclusions of headers and footers in documents? It used to be, documents would ID what document you were reading on every page, which is really useful if one page walks or gets replaced with a new one. Now even life-and-death documents like the Drone Rule Book liberated by the ACLU lack real headers.

This will be a working thread on that.

(0) Seriously, there’s something funky about the production of this document. Perhaps it’s a reprint of the actual drone rule book with interesting stuff removed. But it’s not even clear the classification description on the front page (to include an original classification authority, a reason for classification, and a date for declassification) is complete. Nor are specific redactions cited by exemption. Given that drones were part of the 2001 Finding which was itself classified by NSC, not CIA, that raises interesting questions about how long they maintained that claim.

Also note the green line on the first page, which seems to suggest some digital alteration, either at the White House or ACLU. For a variety of reasons, I also wonder whether this has been updated, with no record, which the informal structure of it would seem to invite.

(1) It’s really crazy for a POTUS to be setting what claim to be “procedures,” as opposed to policy. These are mostly policies. But tied to implementing bureaucratic tools. I’ll write later how this hybrid purpose makes the PPG far less valuable than it pretends to be.

(1) Note the applicability: “for when the United Staes takes direct action, which refers to lethal and non-lethal uses of force, including capture operations, against terrorist targets outside the United States.” Obviously, that’s not what this covers. There are a slew of examples where “the US” takes direct action outside the US. Implicitly, this is about amending or replacing the 9/17/01 Finding (and given the timing, and the declassification of the Finding’s role in torture, it could be the latter). But this does raise questions about whether there’s an underlying (perhaps modified) Finding that undergirds this.

(1) They redact the kind of plan they use to make sure it can’t be FOIAed. I bet there are numerous drone strikes that didn’t have them; remember, at about this process, CIA didn’t play by same rules as DOD.

(1) “based on the legal authorities of the nominating department” Interesting relation with covert authorities.

(1) The capture feasibility assessment seems targeted to Congress. I wonder how broadly this was circulated there.

(1) Note the PPG just assumes everyone knows this is about HVTs without saying so. But the PPG as a whole distinguishes between targeting HVTs and others, with incidental death being envisioned in the latter case (see footnote 1 on 2).

(2) First redaction must relate to the “unable or willing to act” formula; that it is redacted suggests it has nothing to do with established intl law (later incidences of it are unredacted use of the unable willing formula).

(2) second redaction may be a caveat about the circumstances in which expert agencies (such as State) get to review.

(2) “when considering potential direct action against a U.S. person under this PPG, there are additional questions that must be answered.” That’s rather weak.

(2) Note the redaction modifying what kind of “direct action operations” this covers. That may be the same redaction as the last one on the page.

(3) Redaction in bullet 3 is interesting.

(3) Bullet 7 permits variations from this PPG, which essentially eats up the rule book.

(3) Note that the 3 assessments required before using lethal force all make up subbullets to bullet 8. That implies a logical structure whereby the decision making process happens after the fact.

(5) 1H2 suggests the President may impose her own conditions on such approval. This is a crazy level of involvement from the President, not necessarily all in a good way.

(5) Footnote 1 seems to permit us getting exclusive shot at a detainee before we dump them onto foreign governments.

(5) Footnote 2 seems to give NSS a way to veto DOJ indictment. (Which is of particular interest with Awlaki.)

(6) Note the acknowledgement that the US “provides training, funds, or equipment to enable a foreign government to capture a suspect,” which does not count as us doing so.

(6) Note the nominating agency seems to get to suggest what to do with the detainee long term. That seems problematic.

(7) The redaction of things that must be included in a baseball card doesn’t say much for the due process involved. Note the emphasis, too, on gaps in intelligence/differences in opinion. But DOD or CIA gets to pull this together.

(8) No discussion of difference between Interagency Disposition Planning Group and Restricted Counterterrorism Security Group (though the latter appears to be the analysts and the former appears to be the policy people). If the same people are on both it would have a garbage in garbage out effect.

(9) A lot implied by that “if appropriate” language on whether the operational plan can be shared with the Deputies Review.

(9) Note the DNSA determines who will be present at a Deputies Committee review. It’d be easy to leave, say, State out.

(10) Note that they consider whether detaining someone would interfere with sources or methods. Not surprising but the implications of that are worth nothing.

(10) Foreign detention should be explored based on NatSec considerations. No mention here of humane treatment.

(10) Interesting Q why the decision to strike in defiance of Principals Committee guidance goes through DNSA, not NSA. If a Brennan or Monaco presents that decision, it’ll lack the larger picture that an NSA might bring.

(11) Only those people present at DC meeting will learn that POTUS has approved a strike over their guidance.

(11) I will probably return to 3A but I think it is a muddle that totally turns this document inside out.

(11) 3b is written in an odd voice: “lethal action requires” rather than “before taking lethal action.” Also note this comes from within the capture process.

(11) The decision to off someone has to formally come from the GC of the agency that will do the business. Interesting how this might result in two, potentially competing lists.

(11) FN 8: This language seems to provide a time where the DC would reassess feasibility for capture, on expedited process. But the way in which this “procedure” works largely ensures it can be sidestepped.

(12) Here’s how the list of considerations for a capture versus a kill operation look, in completely redacted form.

Given the significant differences in redaction, there doesn’t appear to be much overlap beyond the initial bullet.

(12) It is really bizarre to have to specify that NSS forwards the package to the DC, as if in the past the wrong package got forwarded.

(13) What does this mean: “In all events, the NSS Legal Adviser and the General Counsel of the nominating agency shall consult with DOJ”? Given that they try to avoid paper trails, what does this entail? And when reviewing a USP nomination, there are no requirements about what the DOJ review must include (which might be another bulleted list like the one above if this document weren’t a joke).

(13) Here’s how the Deputies Committee meetings for a capture versus a kill decision differ.

The redacted agency(ies) present at capture but observant at kill may be involved in detention and/or (FBI) prosecution. If so, that means FBI would only get observant status if the IC had decided to kill someone.

(14) Here’s what the DC considers for a capture versus a kill decision. 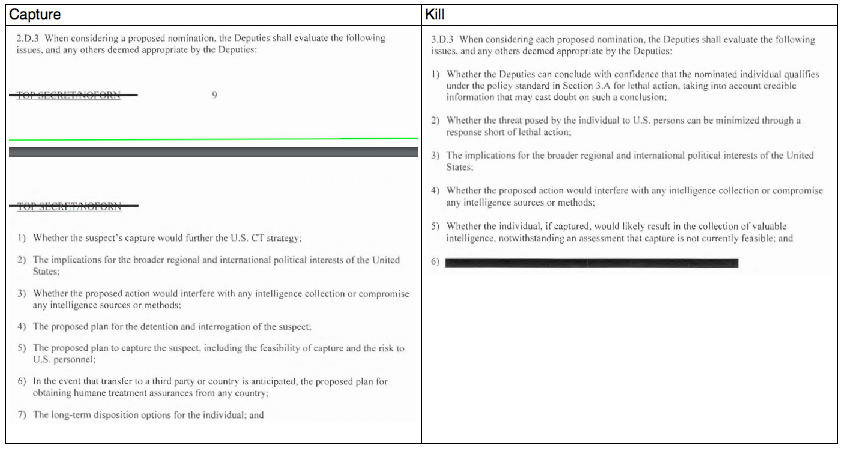 While both consider intelligence implications (sort of) the unredacted section doesn’t consider how a kill decision will affect CT strategy outside of broader regional interests (that it is phrased in that way is particularly interesting given the prominence of side payment strikes in Pakistan).

(14) This seems to permit bypassing the DC altogether.

Note, they don’t even need to get approval from the President to kill someone–she need only be apprised of it. (I’m mindful that this rule book was largely written, though not finalized, by John Brennan). I half wonder whether consideration #6 involves a need to remove him from this earth for secrecy reasons.

(14) Note, the annual review does not explicitly review whether the person still remains a threat.

(15) The thing that will be missed in a “fleeting opportunity” attack is contrary intelligence and downsides, yet nevertheless claims to abide by the same “near certainty” criteria.

(16) The “appropriate NSS official shall communicate the President’s decision” would seem to invite that person bypassing the President altogether (as it did with Brennan in fact).

(17) The PPG specifically permits the President to authorize drone strikes because a person presents a threat to other country’s persons. I look forward to legal analysis of this attenuated imminence standard (especially since the government has most jealously guarded its OLC memos on agreements with countries in question).

(17) Since the after action report must be submitted after 48 hours, it can’t consider larger questions, such as whether it helped or hurt overall CT strategy.

(18) This would seem to permit the agency of any principal/deputy to review after action reports.

(18) Only “appropriate” members of Congress get notified, and this doesn’t even list them. This section would appear to permit briefing the Gang of Four before an operation (for secrecy reasons) but then only informing the Gang of Four afterwards, when secrecy concerns were no longer as urgent. In addition, agencies have to get the NSS to approve sharing with Congress, and only applies it to those “required to submit congressional notifications,” which may create some loopholes.

(18) The redaction at 8B is pretty interesting.

(18) As noted above: the reporting requirements of the PPG don’t invite reporting on larger strategic issues on lethal killing, making the review under 8C pretty useless as well.