What Was the Role of ObamaCare Premium Hikes in Trump’s Win? 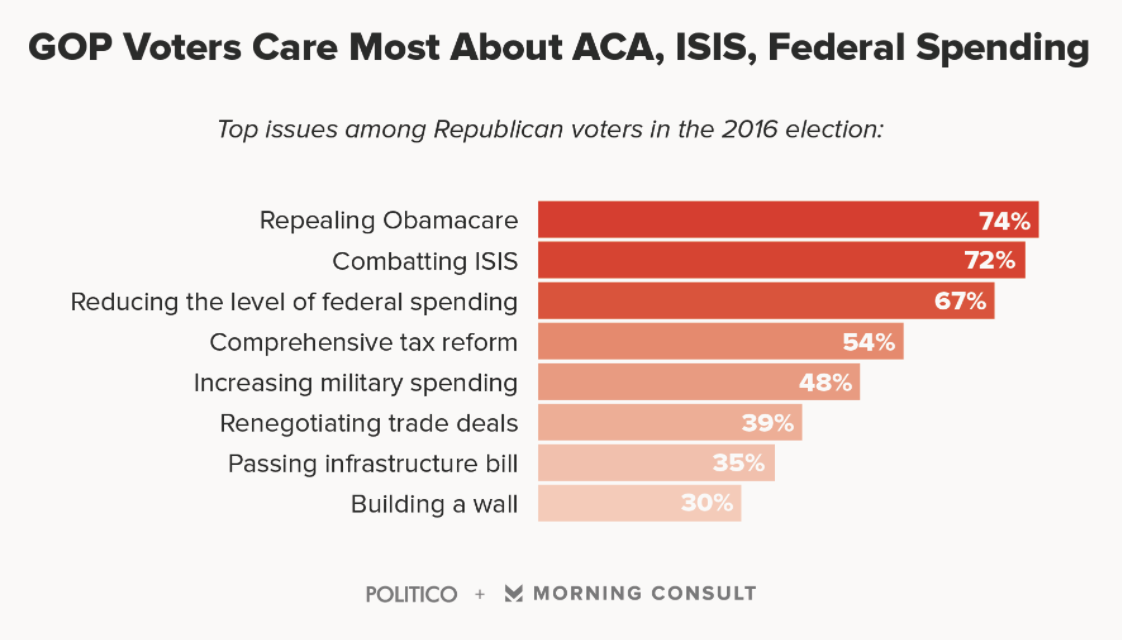 As I noted in my piece assessing the claims that the two letters Jim Comey wrote on the Hillary email investigation cost Hillary the election, the correlation between the October 28 Comey letter and what Trump’s camp reports as a surge is not exact. According to them (and they seem to have seen in real time far more clearly than the Hillary camp), the surge started before the letter.

Trump’s analysts had detected this upsurge in the electorate even beforeFBI Director James Comey delivered his Oct. 28 letter to Congress announcing that he was reopening his investigation into Clinton’s e-mails. But the news of the investigation accelerated the shift of a largely hidden rural mass of voters toward Trump.

So something else (which I posited could be nothing more than Gary Johnson voters deciding to vote Trump) has to have happened as well.

In comments, rollotomasi offered another suggestion, one I think may be significant: ObamaCare premium increases.

The press started reporting that increases would happen before they were announced. To prepare for that, on October 20, Obama, in what was treated by some as a campaign stop in Miami but what was technically a policy speech on the increases, had this to say (after having delivered a long explanation that ObamaCare was working just as planned).

Now, the second issue has to do with the marketplaces.  Although the marketplaces are working well in most of the states, there are some states where there’s still not enough competition between insurers.  So if you only have one insurer, they may decide we’re going to jack up rates because we can, because nobody else is offering a better price.

In those states where the governor or legislature is hostile to the ACA, it makes it harder to enroll people because the state is not actively participating in outreach.  And so, as a consequence, in those states enrollment in the plan — especially enrollment of young people — has lagged.

And what that means is that the insurance pool is smaller and it gets a higher percentage of older and sicker people who are signing up — because if you’re sick or you’re old, you’re more likely to say, well, I’m going to sign up, no matter what, because I know I’m going to need it; if you’re young and healthy like you guys, you say, eh, I’m fine, life is good — so you have more older and sicker people signing up, fewer younger and healthier people signing up, and that drives rates up, because the people who use health care most end up being in the insurance pool; people who use it least are not.

And then, in some cases, insurers just set their prices too low at the outset because they didn’t know what the insurance pool was going to look like, and then they started losing money.  And so now they’ve decided to significantly increase premiums in some states.

Now, it’s these premium increases in some of the states in the marketplace that sometimes attracts negative headlines.  Remember, these premium increases won’t impact most of the people who are buying insurance through the marketplace, because even when premiums go up, the tax credits go up to offset the increases.  So people who qualify for tax credits, they may not even notice their premiums went up because the tax credit is covered.

And keep in mind that these premium increases that some of you may have read about have no effect at all if you’re getting health insurance on the job, or through Medicaid or Medicare.  So for the 80 [percent]-plus people who already had health insurance, if your premium is going up, it’s not because of Obamacare.  It’s because of your employer or your insurer — even though sometimes they try to blame Obamacare for why the rates go up.  It’s not because of any policy of the Affordable Care Act that the rates are going up.

One of the problems with ObamaCare is its complexity. If it takes 7 paragraphs to try to make a big rate hike sound better, it’s not going to work.

The actual rates for ObamaCare plan increases — with an average increase of 22% — came out October 24. There was a great deal of chatter between then and the election, especially around the November 1 start of sign-ups, as the Administration scrambled to get users to shop for a more affordable plan. Significantly, PA was one of the worst affected states.

According to a Kaiser Family Foundation, the ObamaCare hikes should not have mattered. It released a poll showing even among Republican voters, just 5% thought heath insurance was the most important issue. Except the poll, which was released on October 27, right in the middle of the discussion about spiking rates, was actually conducted from October 12 to 18, before the rate increases were announced (which to my mind makes it a largely useless but politically timed poll release). Moreover, the poll sampled far more self-identified Democrats than self-identified Republicans (408 to 285), meaning the margins of error would be far higher for Trump-leaning voters.

But in polls of voters taken after the election, repealing ObamaCare was the top priority among Republicans. 74% of those polled wanted to repeal ObamaCare, versus 30% who wanted to build Trump’s wall.

Admittedly, this isn’t a good measure of the importance of premium hikes (though it does seem somewhat inconsistent with the Kaiser poll). It may be a measure of 7 years of relentless opposition to ObamaCare, compounded by Trump’s repeated description of the program as a disaster.

Moreover, while the October 24 premium hike may explain why Trump started surging before the Comey letter, it wouldn’t explain what Hillary’s camp describes as energizing of Trump’s base when the second letter revealed nothing had been in the emails after all.

All that said, the premium hikes were probably the most significant policy discussion that happened between the last debate and the election. And for the small segment of the electorate that actually uses the exchanges, that policy change may have been felt very viscerally as they started the tedious process of shopping for an affordable plan.

The Blame Comey Movement About that Russian Hacker Story