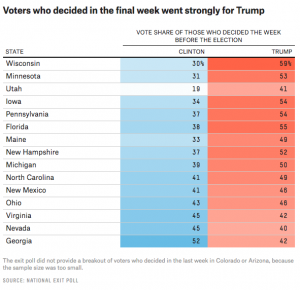 There is a big rush from commentators on all sides to blame Jim Comey for the election result. And while normally I’m happy to blame Comey for things, I’m not convinced we have data to support that claim here, at least not yet.

The claim comes from two places. First, this description of how Trump’s analysts responded after discovering rural whites were voting at higher rates than expected.

Trump’s analysts had detected this upsurge in the electorate even before FBI Director James Comey delivered his Oct. 28 letter to Congress announcing that he was reopening his investigation into Clinton’s e-mails. But the news of the investigation accelerated the shift of a largely hidden rural mass of voters toward Trump.

Inside his campaign, Trump’s analysts became convinced that even their own models didn’t sufficiently account for the strength of these voters. “In the last week before the election, we undertook a big exercise to reweight all of our polling, because we thought that who [pollsters] were sampling from was the wrong idea of who the electorate was going to turn out to be this cycle,” says Matt Oczkowski, the head of product at London firm Cambridge Analytica and team leader on Trump’s campaign. “If he was going to win this election, it was going to be because of a Brexit-style mentality and a different demographic trend than other people were seeing.”

Trump’s team chose to focus on this electorate, partly because it was the only possible path for them. But after Comey, that movement of older, whiter voters became newly evident. It’s what led Trump’s campaign to broaden the electoral map in the final two weeks and send the candidate into states such as Pennsylvania, Wisconsin, and Michigan that no one else believed he could win (with the exception of liberal filmmaker Michael Moore, who deemed them “Brexit states”). [my emphasis]

And from this letter from Hillary’s pollster Navin Nayak.

We believe we lost this election in the last week. Comey’s letter in the last 11 days of the election both helped depress our turnout and also drove away some of our critical support among college-educated white voters — particularly in the suburbs. We also think Comey’s 2nd letter, which was intended to absolve Sec. Clinton, actually helped to bolster Trump’s turnout.

Navak is presumably the same person who missed the surge in rural areas that Trump was seeing, and therefore partly responsible for Clinton’s belated attention to MI and WI. No matter what caused surges in Trump’s support, not responding to it was a key reason for Hillary’s loss. So Navak has a big incentive to blame others.

After saying everything was going swimmingly in early turnout (without noting low African American turnout in that early vote), Navak tells this story about the last week.

But then everything changed in the last week.

Voters who decided in the last week broke for Trump by a larger margin (42-47). These numbers were even more exaggerated in the key battleground states.

There are two major events that happened in the last week:

Director Comey released his first letter 11 days out from the election, which likely helped to depress turnout among Hillary’s supporters. It made Sec. Clinton’s e-mail the focus of the campaign for half the remaining 10 days.

After seeing record early vote numbers, there was a significant drop in Election Day turnout, particularly among Hillary supporters, and this was noticeable in both larger cities such as Philadelphia, Raleigh-Durham, Milwaukee, Detroit and the suburbs surrounding these and other cities.

What these two pieces — from Trump’s data analyst and Hillary’s pollster — suggest is a correlation between the Comey letter and Trump’s improved chances. But there’s no proof of causation — certainly not that Comey is the primary explanation.

n fact, temporally, the correlation is not perfect. Trump’s analysts say the trend started before the Comey letter. This was a weird election, but it is still highly unlikely that a letter released on October 28 can entirely explain a trend that started before October 28.

Navak is a lot squishier on timing. He says the trend happened in the last week. But of course, the letter (and the blizzard of press coverage) came out earlier than that. Precisely when did he see things start going south? He doesn’t say in his email but if it was really just the last week, then that timing doesn’t make sense either.

When I raised this on Twitter, a lot of people said swing state residents would be more bombarded with discussions about emails in the last two weeks. But aside from people who went to a Trump rally (which is admittedly thousands of people, though presumably hard core Trump supporters more than late deciders), they wouldn’t necessarily have. Trump’s final ad, which was very good and pretty reminiscent of Obama’s election ads, only referred to the emails once (albeit right at the beginning, just 5 seconds in), and even then only visually, appearing as Trump said “corrupt.” The emails were just one part of Trump’s larger narrative about a corrupt establishment. The rest of Trump’s ad played to economic anxieties, with dog whistles to anti-Semitism and xenophobia, but not the aggressive ones you’d see in his rallies.

Hillary’s final ad meanwhile (at the same link), was far weaker, basically just saying Trump is a dick but without naming him. So for those who decided based  on the content of these ads (I personally didn’t see many super PAC ads, though they may be a factor), the emails probably weren’t the deciding factor, the quasi-empowering message probably was more likely to have been.

And look at the data, above, from Nate Silver’s analysis. It is absolutely true that late-deciding voters in WI, MI, IA, PA, and FL went disproportionately for Trump. They did too in UT, which is unsurprising, but which is also a useful example because it suggests one of the other things people were doing in the last week: Deciding whether to vote a third party candidate, Evan McMullin, or not. Indeed, polling averages show that Trump’s late surge nationally came in conjunction with what was a longer, slower slide in Gary Johnson’s support. I think it’s possible that the emails affected people’s decision to vote third party or even among Republicans who might have voted for Hillary. But one thing that appears to partly explain Trump’s rise at the end is just a very typical decision among people who consider voting third party to in the end support the major candidate. Remember, too, that Trump’s aides had finally gotten him onto a script for these last days, so he was saying and doing fewer offensive things just as these late deciders decided.

Finally, look at those other swing states. In OH, the difference was much smaller. In NV, later breakers actually broke for Hillary. In GA that was even more pronounced.

Perhaps most interesting of all, however, is VA. VA — especially its northern suburbs where Hillary got most of her support — is packed with security clearance holders, precisely the kind of people who’ve expressed the most exasperation about a perceived double standard in the treatment of Hillary. Perhaps that sentiment, which I’ve seen expressed by individuals in a number of places — is overstated. Maybe some clearance holders who also understand overclassification aren’t as bugged by the email scandal as others. In any case, in VA, the state that probably has a higher chunk of clearance holders than any other, broke slightly for Hillary after the Comey letters. Why would Virginians treat the Comey letter so much differently than Wisconsonites and Michiganders?

One final thing. In the days after the first Comey letter, polls actually asked how much it would influence voters’ decision. One poll showed as many undecided voters saying it made no difference as those who said it did.

Thirty-nine percent of voters said the additional review of emails in the Clinton case had no bearing on their vote in November, while 33 percent it made them much less likely to vote for Clinton.

But most of those voters are already aligned against Clinton. Nearly two-thirds of Trump voters, 66 percent, said it makes them much less likely to vote against Clinton.

In others, there was a bigger difference, even affecting Clinton supporters.

An ABC/Washington Post tracking survey released Sunday, conducted both before and after Comey’s letter was made public on Friday, found that about one-third of likely voters, including 7 percent of Clinton supporters, said the new e-mail revelations made them less likely to support the former secretary of state.

The poll found that Clinton received support from 46 percent of likely voters to Trump’s 45 percent, suggesting the race is a toss-up. That contrasts with the 12-point advantage that Clinton held in the same poll a week ago. Trump’s numbers have crept up, in part, as more Republicans have gotten behind their candidate.

A CBS tracking poll of likely voters in battleground states — the 13 states that could swing the Nov. 8 election — released on Sunday found that among voters overall, 71 percent say it either won’t change their thinking, or in some cases, they had already voted.

I’m not aware of any polls that asked about this after Comey’s second letter (and I’m somewhat baffled about how it could energize Trump voters in the way Navak claims), so it’s unclear how these numbers moved after she was re-exonerated.

The election was incredibly close. So if those 7% of Hillary voters who, the weekend after the first Comey letter, considered his announcement significant enough that it might decide their vote instead decided to stay home, it may well have been decisive. But we don’t have that data yet.

Rather, I’m just saying we don’t have proof that a somewhat inexact correlation between Trump’s late surge and the Comey letter was the cause of his late surge. I’m happy to be convinced otherwise. But right now I’m not seeing it.

Update: This David Plouffe analysis is worth reading in the context of this post for two reasons. First, he notes that Gary Johnson lost support primarily among his older supporters, but his younger supporters stayed with him. This means that his decline likely was tied to a Trump increase, and what remained did hurt Hillary disproportionately.

And here’s what he says about Comey.

JAMES COMEY From the last debate until Election Day, the dominant news was the F.B.I. and Mrs. Clinton’s emails along with a drumbeat of daily WikiLeaks dumps. Postelection research will help shed light here, but the small number of undecided voters at the end should have broken at least equally based on their demographic and voting history. If exit polls are accurate, they moved to Mr. Trump much more than to Mrs. Clinton in certain battleground states, and it’s quite possible the shadow created by the F.B.I. director was the major culprit. Oct. 19, the day of the final debate, was a long 20 days to Nov. 8, and the atmosphere was far from ideal for the Democratic candidate.

Update: On Twitter, Jamison Foser explained why the second letter would invigorate Trump’s supporters: because it fed the narrative that Hillary is corrupt and always gets away with it. That makes sense.

Another person pointed out that the differential impact in VA may be due to Tim Kaine’s influence, which is also a good explanation.

Is FBI Still Fluffing Its Encryption Numbers? What Was the Role of ObamaCare Premium Hikes in Trump’s Win?