In a piece repeating erroneous BuzzFeed reporting, the Atlantic expresses concern that the left is now sharing fake news stories just like the right shared them during the election.

If progressives are looking to be shocked, terrified, or incensed, they have plenty of options. Yet in the past two weeks, many have turned to a different avenue: They have shared “fake news,” online stories that look like real journalism but are full of fables and falsehoods.It’s a funny reversal of the situation from November. In the weeks after the election, the press chastised conservative Facebook users for sharing stories that had nothing to do with reality. Hundreds of thousands of people shared stories asserting incorrectly that President Obama had banned the pledge of allegiance in public schools, that Pope Francis had endorsed Donald Trump, and that Trump had dispatched his personal plane to save 200 starving marines.
The phenomenon seemed to confirm theorists’ worst fears about the internet. Given the choice, democratic citizens will not seek out news that challenges their beliefs;  instead, they will opt for content that confirms their suspicions. A BuzzFeed News investigation found that more people shared these fake stories than shared real news in the three months before the election. A follow-up survey suggested that most Americans believed fake news after seeing it on Facebook. When held to the laissez faire editorial standards of Facebook, the market of ideas fails.

As I laid out, BuzzFeed’s claim that most Americans believe fake news was not what BuzzFeed’s poll actually showed; rather, it showed that those who remember fake stories believe them, but that works out to be a small fraction of the people who see the story. And this piece is one of many that points out some methodological problems with BuzzFeed’s count of fake news sharing.

The Atlantic then goes onto cite stuff (like the @AltNatParSer and @RoguePOTUSStaff) that is not verified but might be true but in any case is critique as the left’s new habit of fake news.

All that said, the Atlantic is right that the left can be sucked in by not-true news — but that was true during the election, too. Consider this Stanford study that, generally, found that fake news wasn’t as impactful as often claimed.

We estimate that in order for fake news to have changed the election result, the average fake story would need to have f ≈ 0.0073, making it about as persuasive as 36 television campaign ads.

Buried deep inside the story is a detail one or two people have noted, but not mentioned prominently. Among the fake news stories studied by the authors (which were limited to stories debunked at places like Snopes, which is a significant limit to the study), two stories favorable to Hillary were the most believed.

Blue here is the percentage of the US adult population that believed a story and red is being “not sure.” Both if you aggregate those two categories and if you take only those who affirmatively say they believed something, this story — claiming Congressman Jeff Denham helped broker Trump’s deal for the Trump Hotel in DC — and this story — repeating Kurt Eichenwald’s claim that he had proof WikiLeaks led all the fake stories Stanford tested, with close to 30% definitely believing both (see my post on that story). This story claiming Clinton paid Beyonce for a campaign appearance was the most-believed anti-Hillary story, which came after a third Hillary-friendly story claiming Trump was going to deport Lin Manuel-Miranda (note, as also shown in other studies, the fake news stories weren’t recalled or believed at the same rates as the true ones, though in the aggregate, the Denham story rivaled “small true” stories). 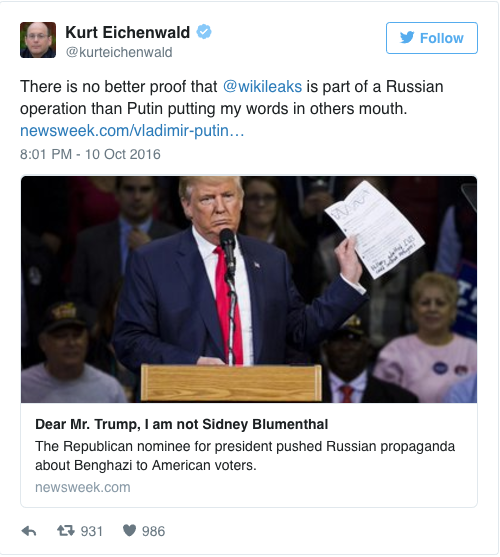 Note, the Stanford study did not test this story, which also claimed Wikileaks had doctored emails. It appeared on the same Clinton site three days earlier, which was itself based off a fake news created by a Hillary supporter (with some spooky ties), and magnified by Malcolm Nance and Joy Reid. Those two stories likely reinforced each other.

I’m interested in both of these stories — in part, because the reality about Trump’s corruption and his ties to Russia are both bad enough, without Democratic operatives inventing stories about it. But obviously, I’m particularly interested in the latter, in part because so even in spite of the real evidence implicating Russia in the hack of the DNC, Democrats tend to believe anything involving Russia without evidence.

That’s ironic, given that the risk of fake news is supposed to stem from Putin poisoning our airwaves.

Update: I’ve added “three” to the title because a number of people said it would make it more clear. Thanks to those who suggested it.