Why Susan Rice May Be a Shiny Object 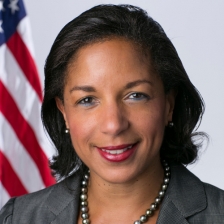 A bunch of Republican propagandists are outraged that the press isn’t showing more interest in PizzaGate Mike Cernovich’s “scoop” that the woman in charge of ensuring our national security under President Obama, then National Security Advisor Susan Rice, sought to fully understand the national security intercepts she was being shown.

There are two bases for their poutrage, which might have merit — but coming from such hacks, may not.

The first is the suggestion, based off Devin Nunes’ claim (and refuted by Adam Schiff) that Rice unmasked things she shouldn’t have. Thus far, the (probably illegally) leaked details — such as that family members, perhaps like Jared Kushner (who met with an FSB officer turned head of a sanctioned Russian bank used as cover for other spying operations), Sean Hannity (who met with an already-targeted Julian Assange at a time he was suspected of coordinating with Russians), and Erik Prince (who has literally built armies for foreign powers) got spied on — do nothing but undermine Nunes’ claims. All the claimed outrageous unmaskings actually seem quite justifiable, given the accepted purpose for FISA intercepts.

The other suggestion — and thus far, it is a suggestion, probably because (as I’ll show) it’s thus far logically devoid of evidence — is that because Rice asked to have the names of people unmasked, she must be the person who leaked the contents of the intercepts of Sergey Kislyak discussing sanctions with Mike Flynn. (Somehow, the propagandists always throw Ben Rhodes’ name in, though it’s not clear on what basis.)

Let me start by saying this. Let’s assume those intercepts remained classified when they were leaked. That’s almost certain, but Obama certainly did have the authority to declassify them, just as either George Bush or Dick Cheney allegedly used that authority to declassify Valerie Plame’s ID (as some of these same propagandists applauded back in the day). But assuming the intercepts did remain classified, I agree that it is a problem that they were leaked by nine different sources to the WaPo.

But just because Rice asked to unmask the identities of various Trump (and right wing media) figures doesn’t mean she and Ben Rhodes are the nine sources for the WaPo.

That’s because the information on Flynn may have existed in a number of other places.

Obviously, Rice could not have been the first person to read the Flynn-Kislyak intercepts. That’s because some analyst(s) would have had to read them and put them into a finished report (most, but not all, of Nunes’ blathering comments about these reports suggest they were finished intelligence). Assuming those analysts were at NSA (which is not at all certain) someone would have had to have approved the unmasking of Flynn’s name before Rice saw it.

In addition, it is possible — likely even, at least by January 2017, when we know people were asking why Russia didn’t respond more strongly to Obama’s hacking sanctions — that there were two other sets of people who had access to the raw intelligence on Flynn’s conversations with Kislyak: the CIA and, especially, the FBI, which would have been involved in any FISA-related collection. Both CIA and FBI can get raw data on topics they’re working on. Likely, in this case, the multi-agency task force was getting raw collection related to their Russian investigation.

And as I’ve explained, as soon as FBI developed a suspicion that either Kislyak was at the center of discussions on sanctions or that Flynn was an unregistered agent of multiple foreign powers, the Special Agents doing that investigation would routinely pull up everything in their databases on those people by name, which would result in raw Title I and 702 FISA collection (post January 3, it probably began to include raw EO 12333 data as well).

So already you’re up to about 15 to 20 people who would have access to the raw intercepts, and that’s before they brief their bosses, Congress (though the Devin Nunes and Adam Schiff briefing, at least, was delayed a bit), and DOJ, all the way up to Sally Yates, who wanted to warn the White House. Jim Comey has suggested it is likely that the nine sources behind the WaPo story were among these people briefed secondarily on the intercepts. And it’s worth noting that David Ignatius, who first broke the story of Flynn’s chats with Kislyak but was not credited on the nine source story, has known source relationships in other parts of the government than the National Security Advisor, though he also has ties to Rice.

All of which is to say that the question of who leaked the contents of Mike Flynn’s conversations with Sergey Kislyak is a very different question from whether Susan Rice’s requests to unmask Trump associates’ names were proper or not. It is possible that Rice leaked the intercepts without declassifying them first. But it’s also possible that any of tens of other people did, most of whom would have a completely independent channel for that information.

And the big vulnerability is not — no matter what Eli Lake wants to pretend — the unmasking of individual names by the National Security Advisor. Rather, it’s that groups of investigators can access the same intelligence in raw form without a warrant tied to the American person in question.