In this post, I’ll cover the rest of the I Con the Record 2016 Transparency Report.

As the report notes, these are the individually approved orders. To be assholes, ODNI includes Section 703, which is not used. I Con the Record reports 1,559 orders, which it does not break down.

As an improvement this year, I Con the Record has broken down how many of these targets are US persons or not, showing it to be 19.9%. That means the vast majority of targeted FISA orders are targeted at people like Sergey Kislyak, the Russian Ambassador all of Trump’s people talked to.

This is the target number for the original report, not the order number, and it is an estimate (which is curious). This means at least 28 orders target multiple people. Neither ICTR nor FISC reveals how many US persons were approved for 705b, meaning they were spied on when they went overseas.

This is the authority that covers upstream and PRISM. After presenting its useless report that it had one certificate in 2016 (leftover from 2015), ICTR reports there were 106,469 knowably discrete 702 targets last year, an 11% increase off last year.

Note: one of the games played in the USA Freedom Act transparency procedures was that, once the other counts moved to a selector based count, this was removed from the required reports (which is why ICTR says they weren’t required by law to release it). They presumably did this to hide the likely fact that for every one of these 106,469 targets, there are multiple — possibly very many — selectors tasked, which would make the spying number look Yuge.

NSA and CIA provide the number of content queries they conducted. Since CIA has stopped double counting selectors it uses more than once, this represents more than the 12% increase in queries suggested by the numbers. So queries are increasing at a higher — potentially significantly higher — rate than targets.

Given the way the NSA’s querying process ties queries to deadlines (60 days, for example, or to the underlying authorization), it’s likely NSA just keeps these queries  tasked throughout that period (which may mean CIA moved to do the same this year). If that’s right, it would effectively alert an analyst any time a new communication involving the US person came in.

This post talks about what the report’s claim that just one query of FBI holdings designed to find criminal information had a positive hit — and was reviewed– on 702 information really means.

Meanwhile, NSA’s US person metadata queries have gone up much faster than content queries or target selectors, a 32% increase. As noted in this post, FBI doesn’t have to count their queries and CIA still does not do so.

Also note, this is an estimate. The underlying NSA document makes it clear this is done via algorithm or business rule to estimate these queries, which suggests they’re done automatically. 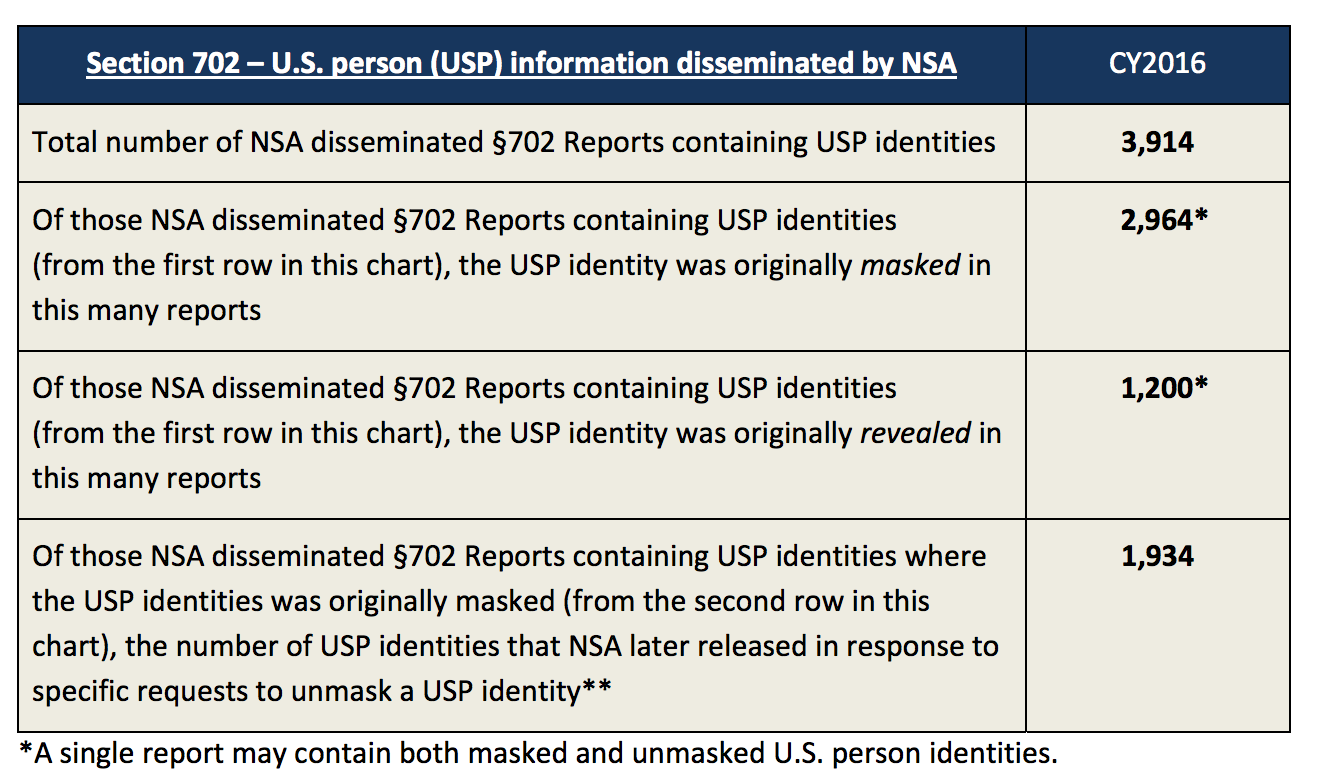 See this post for an explanation of why we shouldn’t take too much from a seeming significant decline in pen registers. Note, I didn’t mention that 43.9% of the 41 targets are estimated to be US persons — but are estimates, which is a bit nutty given the small numbers involved.

Note, of the 60 pen registers ICTR shows, FISC shows 10 were modified (perhaps to include minimization procedures).

The section on “traditional” Section 215 shows that for each order (of which up to 4 had more than one target), there were almost 1,000 selectors sucked in.

Except the number is likely far, far higher, because this metric doesn’t track people sucked in via financial or travel or other Section 215 orders.

This post explains why the 151 million call session records sucked in via the new Section 215 phone dragnet may not actually be that much — but also likely represents edge cases.

Note, the FISC report shows 125 total Section 215 reports, with 108 approved, 16 modified, and 1 rejected (the latter of which ICTR doesn’t mention). The approved reports adds up to the same 124 that ICTR shows. The modified orders likely include minimization procedures.

Here’s the number of queries of returned new phone dragnet data done by NSA and CIA (note, in the old dragnet, this data would not have been as readily available even within NSA, much less at CIA).

As always with meaningful metrics, FBI is exempt. I’ll return to this metric.

I may come back to this as well, but for now, know that FBI requested fewer NSLs last year than in previous years.