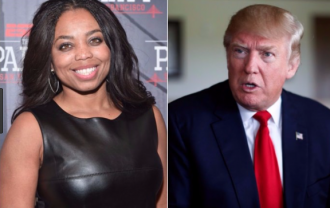 The biggest sports story of the week, unless you are a legal freak in the Zeke Elliot weeds, is more politics than sports. The classy and wonderful Jemele Hill of ESPN let fly some hard truth about Trump on his favorite medium, Twitter. And of course the vacuous suits at Fox News got bent out of shape over the fact a smart woman, especially one of color, had the temerity to point out that their boy Trump was indeed a racist bigot.

I usually tailor videos and images, but had a hard time with this one from USA Today, so you get the full screen scene this time. It is short and lays everything out that you need:

Did Jemele take to a soapbox and do this on air with her partner, Michael Smith on their absolutely excellent Sportscenter 6 platform? Nope, she did it in her private time, on her own personal Twitter account. Now, ESPN is a business, a House of Mouse one at that, so first amendment protections are inapplicable. But that does not mean ESPN ought be censoring or punishing her private thoughts and political speech. Especially on a platform that the snowflake President takes to daily to issue outright lies, bigotry, racism and generally ignorant screed. To ESPN’s credit, while they stepped back from Hill slightly, they did not step away from her. That is good, because Jemele Hill is not only a better and smarter person than Trump, she is quite likely far more popular too. I will stand with her any day and every day.

Okay, back to the games! Hell of a tilt between USC and Texas last night. Don’t know how in the world the Trojans let the Horns back in it, but it was thrilling. In the NFL, it is getting to where who “isn’t” playing is as important as who is. The Cardinals looked horrible last week against Detroit when they had David Johnson, now they don’t, and may not the rest of the year. Luckily, they are playing the Colts, who do not have Andrew Luck. Think Homer Simpson is scheduled to start for the Colts. He probably will beat the hapless Cards.

The Eagles at Chiefs looks to be a great game. Vikings at Steelers looked like it would be too…..but this morning it was announced that Sam Bradford is out for the game. Bradford looked like a world beater last week in collecting up offensive player of the week accolades. But apparently tweaked a knee in the process that we didn’t really see. So, the Vikes will go with Case Keenum today. Not the worst substitute, he is capable.

Cowboys at Broncos looks pretty interesting too. Trevor Siemian did not look that good in the second half last week, and the Broncs were lucky to emerge with a win. He will have to play much better this week, even with the aid of Mile High. The Sunday Night feature of Packers at Falcons should also be great. First NFL game for the Dirty Birds in their new gazillion dollar nest.

Who knows what you will get out of the MNF game between the Lions and Giants? Last week was the return of Really Bad Eli. I am not sure this week will be the return of Good Eli. That is the beauty of it though, like Forrest Gump’s stupid box of chocolates, you just never know what you will get! Matt Stafford has been playing consistently solid ball for quite a while though.

Last, but not least, two future Hall of Famers duel down in Nawlins. Brady and Brees. Deflategate versus Bountygate. Two weeks ago, I would have said this is a laugher. Nut, man, the Patriots looked awfully non-Belichickian last week. So maybe worth a watch.

That is it for this week, rock on.