When The President Hates A Race And Talks Racist Trash

President Donald J. Trump is a racist bigot. Jemele Hill was right on that one, not that sane people had not already realized it long ago, and well before his election. Take his ignorant position on the Central Park Five case, just as a for instance. Then add on how he was sued decades ago for discriminating against blacks in housing. Throw in a thousand other tell tale points and you have a picture of a self entitled candy assed rich New York racist. That is just who he is. It has always been there for inquiring minds to see if they so desired.

Now the latest pure and unadulterated racism from the now President of the United States. Last night in Alabama, Trump let loose a rambling self centered screed of a speech that would make George Wallace cringe. Here is a sample:

“Wouldn’t you like to see one of these owners, when somebody disrespects our flag, to say, ‘Get that son of a bitch off the field right now, out, he’s fired. He’s fired!”

He then went on to state that any player so exercising free speech should be “fired” and unemployable at their career job. From Michael David Smith at PFT:

Trump said an NFL owner who releases a player would instantly gain broad support across America.

Trump added that he believes fans should walk out if players don’t stand for the anthem. “If you see it, even if it’s one player,” Trump said, “Leave the stadium.”

Trump also argued that if they do this to boycott the NFL and personal free speech, they would be supporting him and his position.

Clearly aiming at Colin Kaepernick, Michael Bennett and Malcolm Jenkins, prominent NFL players who have had the audacity to be free thinking humans and exercise the protected free speech our Bill of Rights is led by and that generations of American patriots fought and died to preserve. Donald Trump shits on every ounce of that every time he goes on one of his little pointed and racist rants. And boy did he shit on it last night in Alabama. You’d almost think Trump is aligned with the neo-Nazi white supremacists with torches in Charlottesville that he praised as “fine people” instead of the full diversity of American citizens. Including, you know, black people.

Was Trump done? Of course not. He then cravenly went on to scold the NFL for being soft because of their (still lame and ineffective) concern about CTE degenerative brain disease:

Because you know if they hit too hard…Fifteen yards! Throw him out of the game! they hd that last week. I watched for a couple of minutes. Two guys, just really, beautiful tackle. Boom, fifteen yards! 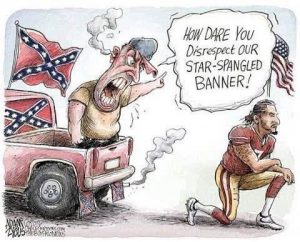 An outrageous thing to say about, again, American citizens and their workplace safety issues. Especially when the most recent studies found CTE degeneration in 99% of the brains from NFL players they have examined. And when the NFL was just slapped with a complaint on Aaron Hernandez that exhibited that even a relative young player displayed “a raisin-like brain of a 70-year-old even though he was 27″. Simply craven, bigoted and outrageous.

It is the the stuff of a narcissistic self entitled bigot plantation slave owner. Trump literally thinks he is not only the the better, but genetically superior to other humans, including the constituents he works for. Including people he thinks are owned as slaves by the NFL and other terrorized employees.

When Trump instructs NFL owners to fire people that disagree with his own petty world view, he thinks they are plantation owners such as he sees himself with the rest of humanity. Trump makes “the best deals” but cannot see, nor appreciate, the NFL collective bargaining agreement (CBA), nor does he respect that deal for squat if employees thereunder happen to annoy the fat ass boy king and god.

Apparently Trump thinks the illustrious group of NFL owner oligarchs are his bitches too. As Don Van Natta noted, “Bob Kraft, Jerry Jones, Stan Kroenke, Daniel Snyder, Shahid Khan, Woody Johnson & Bob McNair each gave $1M to Trump”. That is nearly one quarter of the NFL owners. What are they rewarded with by their benefactor Trump? A call for boycott of their business interests unless they enforce an unconscionable suppression of political free speech he disagrees with.

This may “only be sports”, but this is one of the more stunningly outrageous and un-American symbols of the cancer the Trump Presidency really is. And what a demented, sick and small man Trump really is.

Did Trump stop with that stunning pettiness and bigotry? No, of course not. He woke up and decided to be the charlatan of humanity he really is, and decided to lash out at another icon of sports. Steph Curry. And more: 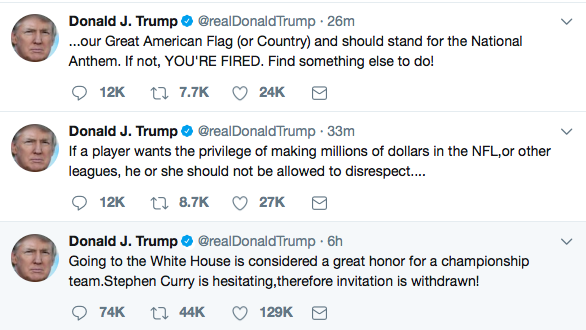 Well that is brilliant Art of the Squeal Like a Pig Don.

So, lets see, who has Donald Trump lashed out at exclusively in the last 24 hours? Ryan Lizza hit it on the head:

Trump has now attacked Jemele Hill, Colin Kaepernick, & Stephen Curry. All have something in common but I can’t quite put my finger on it.

Ryan was being sarcastic about the putting a finger on it. And, again, he was completely correct in his observation. I wonder what Trump would say about a golden white boy who turned down a White House invitation”? Oh, wait….

The face of the New England Patriots, Tom Brady, did not attend Wednesday’s White House ceremony with his teammates due to “personal family matters” — but the show went on without the star quarterback.

Brady’s decision not to visit the White House comes on the same day former teammate and convicted murderer Aaron Hernandez was found dead after an apparent suicide in his prison cell.

Yes, a pure as white can be Tom Brady gets no bad mouth at all from our racist bigot President, but be a black person in sports, whether athletes like Colin Kaepernick and Michael Bennett, or sports journalist like Jemele Hill, and he will try to deprive you and your family of the essential income your professional career provides.

This is where we are in America in the Age of Trumpism. If you are a white nationalist fat ass racist bigot, your President thinks you are “fine folk”. If you are an intelligent black, brown, gay or other, even trying to serve your country’s military, your President, Trump The Genetically Magnificent, will attack you and your family’s very source of income, and well being, mercilessly.

It is the shame of modern America.

I’m sorry, I’ve no stomach for the actual games this weekend at this point. We can all discuss that in comments, but not here. Not now. Not after this.