CNN provides an explanation, such as one is possible, for why Trump thinks the DOJ IG report on the Hillary investigation undermines the entire Russia investigation, which he just tweeted about. 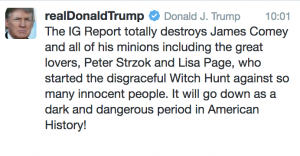 The logic treats the FBI investigation into suspected Russian assets on Trump’s campaign as a conspiracy against Trump personally, based in part on Peter Strzok’s texts, taken out of the context of decisions made on the Russia investigation.

Trump’s lawyers now believe that since the IG report gave those at the FBI “the benefit of the doubt” about their behavior — finding no conspiracy — then the President should receive the same treatment. “Why doesn’t that apply to the President as well?” one source said.

In addition, while the IG report found no evidence of political bias, the President’s attorneys believe they can argue the entire investigation is tainted and corrupt, given the text from FBI Agent Peter Strzok that said about Trump’s election, “We’ll stop it.”

Of course, even within the context of the Hillary IG report, Strzok offers the evidence against the corruption of the FBI: that unlike the constant leaks about the Hillary investigation (the IG Report’s far biggest fault is that it doesn’t treat the leaking from SDNY as a topic unto itself), the FBI didn’t leak, at all, about the investigation into the suspected Russian assets on Trump’s campaign.

Strzok stated that had he—or the FBI in general—actually wanted to prevent Trump from being elected, they would not have maintained the confidentiality of the investigation into alleged collusion between Russia and members of the Trump campaign in the months before the election. Page similarly stated that, although she could not speak to what Strzok meant by that text message, the FBI’s decision to keep the Russia investigation confidential before the election shows that they did not take steps to impact the outcome of the election.

In a text message exchange on August 15, 2016, Strzok told Page, “I want to believe the path you threw out for consideration in Andy’s office—that there’s no way he gets elected—but I’m afraid we can’t take that risk. It’s like an insurance policy in the unlikely event you die before you’re 40….”

Strzok provided a lengthy explanation for this text message. In substance, Strzok told us that he did not remember the specific conversation, but that it likely was part of a discussion about how to handle a variety of allegations of “collusion between members of the Trump campaign and the government of Russia.” As part of this discussion, the team debated how aggressive to be and whether to use overt investigative methods. Given that Clinton was the “prohibitive favorite” to win, Strzok said the reference in his text message to an “insurance policy” reflected his conclusion that the FBI should investigate the allegations thoroughly right away, as if Trump were going to win. Strzok stated that Clinton’s position in the polls did not ultimately impact the investigative decisions that were made in the Russia matter.

In the inevitable IG report on the Russia investigation, this passage will be followed with analysis of what the outcome of this debate was, whether to use overt investigative methods or not. It will show that Strzok lost that debate.

We know that, in part, because Sally Yates said as much, and said it about the investigation into Paul Manafort. This is her explanation to the IG about overt steps in advance of an election.

And the Bureau never pushed back on that concept. This actually came up with, in the connection with Paul Manafort. And they had an investigation on Manafort and I had a lengthy discussion with [McCabe], at least one, maybe more, about how important it was at that time that our investigation not be overt. And what they were, what the Bureau was doing with respect to Manafort because that could impact Trump even though he was no longer his campaign manager. That unless there was something they really needed to do, because they were getting records and doing that kind of, unless there was something they needed, really needed to do overt they really needed to stay under the radar screen…. Because it’s not fair to impact [an election].

Moreover, there’s additional evidence the FBI didn’t take overt steps, particularly with those still tied to Trump’s campaign. It wasn’t until some time after February 16, 2017  — literally six months after that text — that FBI subpoenaed George Papadopoulos’ call records, a move FBI could have taken at any time with a “relevance” standard. That delay meant that Papadopoulos hid the existence of his entire communication history with Ivan Timofeev until after his two interviews (and tried to hide it entirely by deleting his Facebook account).

In this post, I showed that, given that they didn’t know about Ivan Timofeev until after his interviews, they could not even have started pursuing a warrant until after the first interview, at best (and didn’t know about the existence communications over a Section 702 provider with Timofeev until after both). In this post, I suggested that it looked like the FBI first obtained a preservation order for the device GSA had on him on March 9, 21 days after his second interview.

Since then two details have come out. First, this Peter Strzok/Lisa Page SMS text highlighted by Matt Tait suggests that as late as June 6, 2017, the Special Counsel’s office was still debating whether searching Section 702 presented a litigation risk (meaning Trump’s buddies are getting far more protection than the rest of us might be).

Then there’s a point that Eric Swalwell made in Monday’s hearing debating whether or not to reveal the Schiff memo. In response to Michael Turner’s suggestion that there was no evidence of “collusion” between Trump and Russia, Swalwell pointed out that only after the FBI challenged Trump aide claims did the Bureau find evidence to support a conspiracy.

George Papadopoulos I think is the canary in the coal mine. He was interviewed January 27, 2017, by FBI. He lied about his contacts over in London with the professor. He was interviewed again in February, and he lied. Only when the FBI showed the willingness to subpoena his Skype and Facebook logs did he come around 6 months later.

This makes it clear that the FBI had not even obtained call records from Papadopoulos (via an NSL or a subpoena) before the second interview, the standard for which is really low.

Again, this shows that, at least during that phase of the investigation, the FBI was moving very conservatively.

And, as noted, even several weeks after Robert Mueller took over the investigation, the team was still debating whether they could do what FBI otherwise does at an assessment level, which is to search 702 data in the FBI’s custody. As I’ve noted, the use of lifetime Republican Stefan Halper to ask Papadopoulos questions (the FBI can use informants at the assessment level) rather than collecting actual call records not only seems to have been an effort to use least intrusive means possible to chase down leads, but it also badly delayed the discovery of key details about Russia’s attempts to curry favor with Trump aides.

If Peter Strzok argued in August that the FBI should be far more aggressive investigating suspected assets infiltrating the Trump campaign to prevent the possibility that a Manchurian candidate might take over the country, he lost that debate, and continued to lose it for the almost the entirety of the time he was involved in the investigation, which according to the IG Report came on July 28, the day after IG Michael Horowitz informed Rod Rosenstein and Mueller about his texts with Lisa Page.

We then obtained all text messages and instant messages for those FBI personnel for the entire period of the Midyear investigation through July 1, 2017, to capture post-election discussions.

Strzok was removed from the Special Counsel’s investigation on approximately July 28, 2017, and returned to the FBI in another position, after the OIG informed the DAG and Special Counsel of the text messages discussed in this report on July 27, 2017.

So Strzok lost his argument to investigate more aggressively, and as soon as evidence of his alarm about the suspected assets infiltrating the Trump campaign and his disgust with Trump generally became known, he was removed from the case.

This is the evidence that Trump wants to turn into a conspiracy against him.

All that said, Strzok remained on the case just long enough to net its first arrest, that of Papadopoulos on July 26. Which is why I’m so interested in his explanation for a May 18, 2017 text, another one that disproves the conspiracy. In the text written 10 months after the start of the investigation, Strzok suggested his gut sense suggested “there’s no big there there.”

“you and I both know the odds are nothing. If I thought it was likely I’d be there no question. I hesitate in part because of my gut sense and concern there’s no big there there.”

Here’s his explanation of the text after the fact, which would incorporate information he learned in the two months he remained on the investigation after May 18.

As I looked at the predicating information, as I looked at the facts as we understood them from…the allegations that Russia had these emails, and offered to members of the Trump campaign to release them. As we looked at the various actors, the question [was,]…was that part of a broad, coordinated effort, or was that simply a bunch of opportunists seeking to advance their own or individual agendas…which of that is it? …My question [was] about whether or not this represented a large, coordinated conspiracy or not. And from that, as I looked at what would give me professional fulfillment, what I thought would be the best use of my skills and talents for the FBI and for the United States, whether to take, which path to take. [my emphasis]

On May 18, he suggested there was no big there there. But in a description of the investigation that reflects knowledge through July 28, during which period FBI finally started analyzing call records (and also learned about the June 9 Trump Tower meeting), he instead weighed it as a matter of determining whether there was a “broad, coordinated effort” or just “a bunch of opportunists seeking to advance their own or individual agendas.” Virtually all the evidence answering that question was collected and analyzed after Peter Strzok was removed from the investigation.

One detail here is new, however. When describing his understanding of the investigation through July 28, Strzok described Russians offering emails to members, plural, of the Trump campaign. Not just Papadopoulos.

After Judge Kimba Wood Rules Any Privilege Fight Would Have to Be Public, Cohen... By January, Trump Believed Manafort Could Flip on Him; Since Then, Trump Learned...