His Girl Friday, But At The New York Times 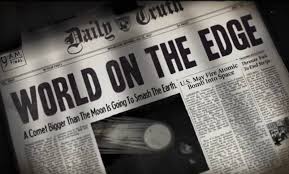 There is a wiki level amount of coverage currently of the so called “Fourth Estate”. It seems so trite and antiquated now.

How will an honest press deal with an aberrant malefactor writ large like Donald J. Trump?

It is no longer a test question, it is reality. Do you continue to showcase the malefactors on the supposedly great “Sunday Shows” like ABC, CNN, NBC et. al. did last Sunday? Or do you do a bit of actual courage and work off of the journalism you claim to sit on?

Hey there Chuck Todd, Jake Tapper, George Stephanopoulos and John Dickerson, and others, sooner or later, even the Salena Zito deplorables you have cultivated to the disgrace of this nation, will catch on to your crap.

What will you do then Maggie Haberman, Peter Baker and the New York Times access squad? Hopefully it will not be too late.

Name the Social Media Author: Lisa Page and Peter Strzok? Or Lindsey Graham... Why Was George Papadopoulos Bitching about the UK While Working on His Presentencing...