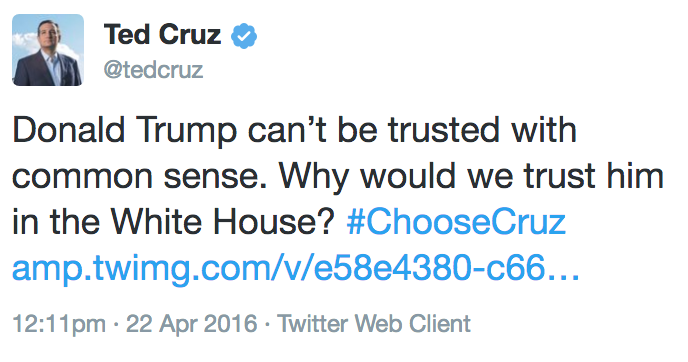 In Lindsey Graham’s questioning of DOJ IG Michale Horowitz in today’s hearing on the IG Report on the investigation of Hillary Clinton, he said, repeatedly, “none of this is normal.” By that, he meant the comments that Peter Strzok and Lisa Page had made about Trump back in 2016. (1:45)

Would you say that this investigation was done by the book?

The whole idea that this is normal, folks, there’s nothing here normal. I don’t want you think the FBI does this day in and day out. This is not normal.

He then reviewed a couple of Peter Strzok and Lisa Page’s texts.

Trump’s not ever going to be come president right? right?

I want to believe the path you threw out in Andy’s office, that there’s no likelihood he’ll become President. It’s like an insurance policy.

God Trump is a loathsome human.

Lindsey then repeated that such comments were not normal.

None of this is normal, folks.

Senator Graham, as a former longtime government lawyer as a JAG, should talk to Senator Graham how abnormal such thoughts about Donald Trump are. 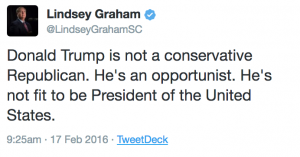 “As early as March, these people hated Trump,” Graham said in the hearing, horrified by the thought that someone could come to such conclusions that early. 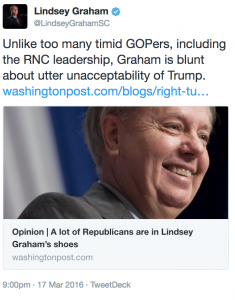 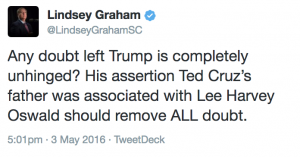 Former Texas Attorney General Ted Cruz was also alarmed about the mean things that Strzok and Page had said in their social media about Donald Trump. (3:04)

Cruz went on to quiz Horowitz about the things that Peter Strzok, as lead investigator, had said about Trump.

Is it true that during the period of the investigation in late 2015 and in 2016, when Mr. Strzok was in charge, he used an FBI device to call President [sic] Trump a quote Effing idiot, although I don’t believe he abbreviated it, a loathsome human, and a disaster?

Did he also say multiple times that, quote, Donald Trump cannot be President?

And is it true that there are many similar statements by Mr. Strzok in the report?

Does any of that conduct give anyone confidence in the fairness in the enforcement of justice?

These are some of the thoughts that this self-imagined arbiter of integrity had to say about Donald Trump during the period he defined, 2015 to 2016. 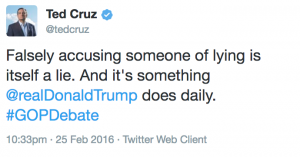 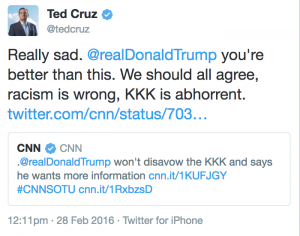 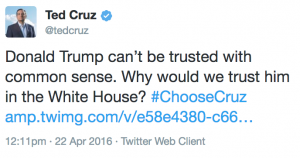 These are, of course, different things. Cruz and Lindsey were publicly sharing their thoughts about how unfit Donald Trump was to be President, how outrageous his racism, how unhinged he was. Strzok and Page were engaging in what they foolishly treated as private conversations, but did so on government owned devices at a time when they were conducting politically charged investigations.

I don’t mean to defend the decisions of Strzok and Page with regards to how they shared their thoughts about the unacceptability of Donald Trump.

But I will defend the principle that it is solidly normal to say that Trump is unacceptable.

And there are no better witnesses to that than Lindsey Graham and Ted Cruz.

There’s one other lesson Lindsey teaches us. “I’m glad I don’t text and email,” he also said. If Graham and Cruz’ personal devices were investigated with the scrutiny that Strzok and Page’s were, Strzok and Page might look tame by comparison.

tweets from our circle
emptywheel@emptywheelRT @briankrebs: 3/ And then you think, hrm....maybe I should scan this thing at Virustotal, just because who TF is this company anyway? Hol…8 minutes ago17 May 2022
Ed Walker 🍞🌹💉💉@MasaccioEWRT @RevDrBarber: In Buffalo, where I was just weeks ago to support Starbucks workers, families are grieving senseless loss. An act of terro…34 minutes ago17 May 2022
Ed Walker 🍞🌹💉💉@MasaccioEWRT @LeahLitman: I'm going to tattoo every word of this Dahlia Lithwick column on my face.* *I'm not actually going to do that, but this co…1 hour ago17 May 2022
Ed Walker 🍞🌹💉💉@MasaccioEWRT @CJSprigman: This post by @espinsegall about how we should think about religion and the judiciary is just so refreshingly straight about…1 hour ago17 May 2022
bmaz@bmazpic.twitter.com/mPIruVeVGj7 hours ago17 May 2022
bmaz@bmazMrs. bmaz says it is too hot to walk the doggo already. What is a poor boy to do?11 hours ago17 May 2022
Jim White@JimWhiteGNVGoodbye Cyprus, hello Germany. Strange changes happened mid-route on the train, and we wound up on the wrong side o… twitter.com/i/web/status/1…2 days ago15 May 2022
Jim White@JimWhiteGNVVery pleasant final breakfast in Cyprus. Strolling saxophone. And then the champaign came out… pic.twitter.com/yLIVs02GHL3 days ago14 May 2022
RayneToday@raynetodayLet's not ignore the plea for others to be "awake & watching!" is the entitled cis-het white dude version of "stay… twitter.com/i/web/status/1…4 days ago13 May 2022
RayneToday@raynetodayRT @marceelias: I am concerned about what might be behind this.👀 clickorlando.com/news/local/202…4 days ago13 May 2022
RayneToday@raynetodayRT @EmmyA2: I’m a lot less interested in the infuriating, but inevitable, outcome of this vote than I am in how much hell Democrats are goi…6 days ago11 May 2022
RayneToday@raynetodayRT @DougJBalloon: Whether it’s the right painting Swastikas in blood on synagogues, or the left writing pro-choice slogans in chalk on Susa…7 days ago11 May 2022
RayneToday@raynetodayRT @waltisfrozen: Lemme get this straight. My children are expected to be tough enough to go through regular "how to avoid getting murdered…7 days ago10 May 2022

The Trump People Really Really Want to Know How Much Mueller Knows about Roger... His Girl Friday, But At The New York Times