Chapter 3 of Ellen Meiksen Wood’s book, Democracy Against Capitalism, takes up the issue of class. She says that class can be defined in one of two ways: “either as a structural location or as a social relation.” Kindle Loc. 1504, ital. in original. The first way takes an index and divides it into parts. For example, we rank everyone by income, then call the lowest quintile the lower class, the next three quintiles, the middle class, the 81-99% the upper middle class, and the rest the upper class.

“In the process of production, human beings work not only upon nature, but also upon one another. They produce only by working together in a specified manner and reciprocally exchanging their activities. In order to produce, they enter into definite connections and relations to one another, and only within these social connections and relations does their influence upon nature operate – i.e., does production take place.

I saw a folk musical recently in Chicago called Haymarket, about the Haymarket Affair, a general strike that turned violent in Chicago in 1886. The play opened with one actor singing a union song, Solidarity Forever. She encouraged us to join in the chorus, which, of course, I did. It was a great way to demonstrate how organizers of that day worked to instill a sense of comradeship among workers in different industries, a sense that they had a lot in common, a sense that they formed a class in opposition to the capitalists, a/k/a the “greedy parasites”. This is the last element of class in Marxist thinking. The class can be seen objectively, which Marx called a class-in-itself, but when the members become aware of their status as class members and begin to struggle together for a common end, Marx called it a class-for-itself.

This last point is illustrated by E.P. Thompson’s book, The Making of the English Working Class, which Wood discusses at length. The basic class structure is in place long before the members begin to understand that they are a class. People similarly situated in the relations of production experience them in class ways. Kindle Loc. 1614. Shared experiences bring them together. Ultimately the members of the class become conscious of the conflicts of interest and aggravation that are making them miserable, and those become the grounds of struggle. The struggle eventually leads to confrontation. Marx argued that in the long run those confrontations lead to socialism as the only form that gives workers a voice.

Wood identifies the relations of production in capitalism as exploitation, domination and appropriation. Neoliberal capitalism has jacked up these three relations at the expense of all workers. For example, meat companies use government regulations to increase the exploitation of meat cutters by increasing line speeds. Payday lenders suck money out of military families and other low income people, protected by the totally not corrupt Republican Mick Mulvaney. For domination, look at the way Amazon warehouse workers are treated. As to expropriation, look at the latest research on the impact of concentration of businesses on wage rates. Or just check out this simple chart, discussed here. The blue line represents corporate profits in constant dollars; the red line is wages in constant dollars. 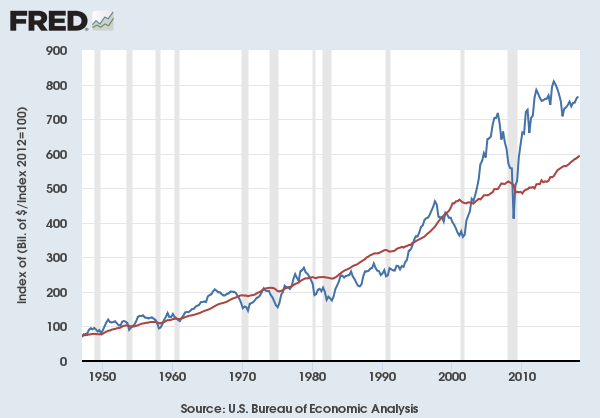 The concept of class has received “remarkably little elaboration, either by Marx himself or by later theorists…”, Kindle Loc 1519, but it’s possible to identify several. Capitalists own the means of production and control access to them. The working class owns no assets and has no access to the means of production other than through individual relations with capitalists. They own only their own labor, and rely on their ability to sell that labor to stay alive and reproduce. Slaves don’t own themselves or their labor. Professional people, small business people and artisans own a little property and use it to produce goods and services for sale. Many of them are dependent on the capitalists in the financial sector through loans and leases, which compromises their independence as a class.

There’s something fabulously American about that definition, so focused on the individual and so utterly indifferent to the context in which people try to achieve their aspirations. Also, who doesn’t want that stuff? The vacuity of the definition makes it clear that we as a nation are not willing to confront the implications of class.

In our highly differentiated economy, it isn’t easy for people to understand that the unpleasantness or worse that they endure in their jobs is common to everyone. That makes the nastiness feel like something specific to the job, a bad manager, bad policies or other excuses. We don’t notice appropriation because the capitalist pumps money out of workers using the “market”, and producers think it’s normal for the capitalist to grab all the profits. Somehow US workers don’t recognize that they are being exploited. They think their long hours and wrecked evenings and weekends and lack of vacations and medical and personal leave and lousy pay and benefits are just fine.

Wood has a different idea. She thinks that capitalism has successfully separated democracy from the economy. Everyone agrees that the government should be controlled democratically. People are taught that the economy is and should be controlled by private interests, and that private control should be sanctioned and enforced by government. Employers exercise domination and control in ways that would not be acceptable if done by the state. Employers restrict exercise of political rights in ways that are forbidden by the Constitution to the government. Fear of losing our income silences most of us at least occasionally.

By what social alchemy did inventions for saving labour become agents of immiseration? Kindle Loc. 1739.

We can’t begin to solve the problems capitalism creates until we all come to grips with this question. And we almost know the answer, even if we haven’t verbalized it yet. It springs from the relations of the capitalist mode of production: exploitation, domination, and appropriation.

There Are Still Mueller Prosecutors Whose Work We’ve Barely Seen If You Have Rick Gates (and Omarosa) You Don’t Need George Papadopoul...