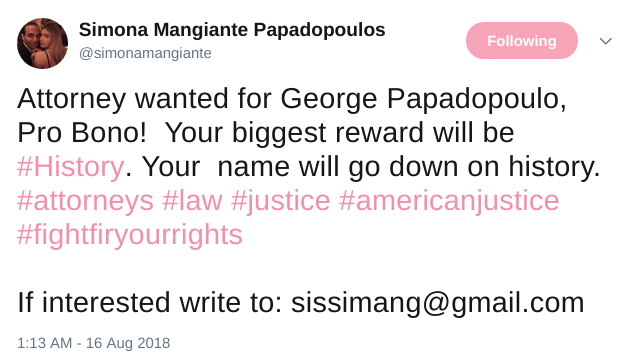 The Trumpian bubble — likely led by right wing legal talking head Victoria Toensing — may be about to lead a young couple to do something insanely stupid.

Yesterday, Simona Mangiante Papadopoulos, George’s wife, tweeted out a request for a pro bono lawyer for her spouse. 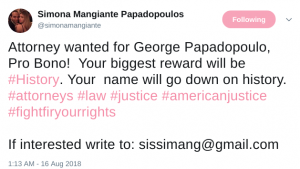 A few hours later, she tweeted out notice that she would follow up with those who have specific expertise.

“George should drop off his plea agreement, in my opinion,” Mangiante Papadopoulos told The Daily Caller News Foundation when contacted after her tweet.

“The idea is to find a lawyer to drop off his plea agreement and sue the government,” she added, noting that she and her husband plan to wait until after a court hearing on Friday to make a final decision.

Papadopoulos faces sentencing in the case on Sept. 7. The special counsel’s office will submit its recommendations for sentencing this Friday. While lying to the FBI carries a maximum sentence of five years in prison, defendants in similar cases often receive six months or less in jail.

Remember: one reason Papadopoulos, relying on the advice of some of the more competent attorneys in this matter, pled guilty is because the FBI had evidence he had accepted payment from an Israeli asking for covert assistance. That’s on top of the lies to the FBI he already pled guilty to, not to mention the clear obstruction of deleting his Facebook account, and a key early role in setting up a conspiracy with Russia. When Stefan Halper (working for the FBI and therefore likely recording conversations) discussed these matters with Papadopoulos in September 2016, Papadopoulos admitted that being involved in them would amount to treason (it’s not treason, but his opinion that it might be makes his later actions far more damning).

This is what the Papadopouloses are reportedly entertaining, due no doubt to an entirely mistaken understanding of their status, one obtained by listening to people like Victoria Toensing and Chuck Ross.

Several things seem to have happened to get us to this point.

Consider: along with whatever else Rick Gates gave Mueller’s team in February when he became state’s evidence, he also probably described what Paul Manafort (and possibly, Don Jr) understood about the dirt Russians were offering to the Trump campaign when both attended the June 9 Trump Tower meeting. Indeed, one of the details included in Papadopoulos’ plea deal is that Gates and Manafort discussed how to respond to Russian (and Greek) offers for a meeting.

On or about May 21, 2016, defendant PAPADOPOULOS emailed another highranking Campaign official, with the subject line “Request from Russia to meet Mr. Trump.” The email included the May 4 MFA Email and added: “Russia has been eager to meet Mr. Trump for quite sometime and have been reaching out to me to discuss.”2

2 The government notes that the official forwarded defendant PAPADOPOULOS’s email to another Campaign official (without including defendant PAPADOPOULOS) and stated: “Let[‘]s discuss. We need someone to communicate that OT is not doing these trips. It should be someone low level in the campaign so as not to send any signal.”

We’ve also just learned that Omarosa also provided evidence to Mueller’s team in February, including her claim that Don Sr knew the Russians were offering emails before WikiLeaks released them.

That detail — that the campaign knew Russians were offering emails as dirt to help Trump — was one of the things that might have helped Papadopoulos avoid a prison sentence. But since he pled, others have almost certainly provided substantially the same information, based both on what Papadopoulos told them, and on what they in turn told their superiors on the campaign or what their superiors told them.

That is, Papadopoulos has served his purpose, and there are now better placed or more credible witnesses for any conspiracy trial.

Victoria Toensing likely recruited the Papadopouloses for her propaganda mission

Then there’s the most likely explanation for how the Papadopouloses got themselves in this position, considering ditching a plea deal and instead taking their chances with the evidence George participated in the case in chief.

Back in March, Chuck Ross started a series of articles — for which one or both of the Papadopouloses, Sam Clovis, and probably Clovis’ (and briefly, Trump’s) lawyer Toensing, were sources — naming lifetime GOP operative Stefan Halper as an informant (presenting evidence he sought to find out what Papadopoulos knew about the emails, possibly cultivated Carter Page, and got a meeting with Clovis to get an introduction to Papadopoulos). If you didn’t look too closely (as Ross did not) the stories served the Devin Nunes effort to suggest the investigation into Trump’s conspiracy with the Russians was based on a rocky foundation. If you looked closely, however, Ross’ series was actually quite damning. It confirmed Adam Schiff’s revelation that the Russians had specified that they intended to leak the dirt they were dealing to help Trump and that Papadopoulos believed, at the time he lied to the FBI about his interactions with Joseph Mifsud, that if he were involved in “hacking” emails it would amount to treason.

To those trying to rescue Trump from his own conspiracy exposure, the Papadopouloses were an easy mark. Perhaps offering a promise of a pardon, they got the two to break one of the requirements of George’s plea: that he not communicate with any of a list of co-conspirators, directly or indirectly. Surely Sam Clovis was on that list, not to mention the President.

That may explain why, as Nunes and his cronies started demanding every record pertaining to Halper, the government moved towards sentencing Papadopoulos, without waiting for him to testify in any trial.

There have been signs before yesterday that the government was not going to agree that Papadopoulos fulfilled his end of the plea deal. But yesterday is a pretty good sign that George doesn’t expect to get the sweet deal he might once have gotten, probably no prison time, had Papadopoulos not bought into conspiracy theories offered by people representing other clients.

The misleading mirror Papadopoulos would see in the Trumpian bubble

Much of this seems to be driven by Simona. I don’t have any reason to credit the rampant speculation she’s actually part of Russia’s influence operation. Rather, I just think she’s naive, working in a foreign country, and vastly underestimating the legal jeopardy the life she married into is in, in part because she is consuming shitty reporting from people within the Trumpian bubble.

Of which the Chuck Ross article reporting all this is a splendid example.

On top of omitting the fact that Papadopoulos obstructed the Russian investigation by deleting his Facebook and cell phone, and omitting Papadopoulos’ very damning comment about treason, Ross spins everything so as to totally misinform the frothy right, much to Simona’s misfortune.

For example, Ross offers Simona’s explanation up, as if it helps the legal case.

While this line has managed to confuse the frothy right about whether, in accepting dirt leading into the June 9 meeting, it would still amount to accepting a thing of value from a foreigner, it doesn’t much matter what Papadopoulos believed, either on April 26, 2016 or on January 27, 2017 (and repeated again a month later). What matters is after having learned the Russians wanted to release some emails that would help the Trump campaign, the campaign took overt actions accordingly.

Then Ross suggests that because some late summer meetings didn’t take place, it absolves Papadopoulos of initiating an effort that led to other meetings taking place.

Papadopoulos also attempted to set up meetings between campaign officials and Russian government officials, but according to the statement of offense submitted by the special counsel’s office, the meetings never took place.

Nope! George still took overt actions as part of a conspiracy, to say nothing of agreeing to join the conspiracy over and over.

Ross then suggests that because Papadopoulos didn’t have a lawyer at the first of two meetings at which he lied to the FBI, it means he didn’t commit a crime.

Prosecutors claim that during a Jan. 26, 2017 [sic], interview, Papadopoulos, who did not have a lawyer present, falsely claimed he met Mifsud prior to joining the campaign in March 2016. But Papadopulos first met Mifsud about a week after learning he would join the Trump team.

Remember, Papadopoulos not only repeated this lie a month later, with the benefit of counsel, but also swore that it was a lie when he pled guilty.

Ross then repeats a canard he has repeated earlier, that by offering up Mifsud’s name (but hiding Ivan Timofeev, the Russian he was engaging in call and response with) it’s exonerating for George.

As evidence that Papadopoulos did not intend to deceive the FBI, Mangiante Papadopoulos claims Papadopoulos volunteered Mifsud’s name to the agents who interviewed him.

Ross pretends that Mueller has questions, regarding Alexander Downer’s testimony, that only a bunch of frothy congressmen have questions about.

Republican lawmakers have also questioned the premise of the FBI investigation and Downer’s role in the matter. One question has been why the information from Downer took over two months to reach the FBI.

Ross then repeats a whole bunch of baseless conspiracies about Stefan Halper — the very conspiracies that contributing to likely got the Papadopouloses in trouble — as if they were true because Devin Nunes said they were.

She also believes that government officials attempted to set up her husband with a series of approaches by government informants, including former Cambridge professor Stefan Halper.

The FBI may use informants at an assessment level. By the time Halper approached Papadopoulos, the investigation into the Trump campaign was a predicated full investigation. Ergo, it doesn’t help Papadopoulos’ case that the FBI used an informant, because that’s what the FBI does, with the long-time explicit knowledge of Devin Nunes and everyone else who oversees the FBI.

And finally, Ross indulges Simona’s fantasy of spinning the approach from Sergei Millian (pretending this approach was out of the blue, rather than something discussed with Ivan Timofeev in one of the Facebook communications Papadopoulos tried to hide) as a second use of an informant rather than a pretty obvious part of Russia’s outreach to Trump and his surrogates, dangling a Trump Tower deal.

Millian contacted Papadopoulos out of the clear blue on LinkedIn on July 22, 2016. The pair became fast friends, meeting several times during the course of the campaign. Mangiante Papadopoulos says George claimed Millian offered him $30,000 a month to work on Russian energy issues from inside the Trump administration.

I get that Chuck Ross’ job is to feed the frothy right, to present conspiracies in isolation from the public information that would pop those conspiracies.

But it seems like these two are feeding each other, Simona giving Ross the latest scoop on his serial conspiracy theory, and Ross feeding her insane plan to ditch a plea deal and face what are likely to be foreign agent and conspiracy charges instead of whatever sentence Mueller pitches tomorrow.

I mean, George is a self-important little shit who showed willingness to sell out his country (to at least two other countries) for a bit of fast money.

But he’s being used, badly, here.