The Objection that Made Mueller’s Case

This will be a grandiose statement, but what the fuck, it’s a crazy day.

The moment when Robert Mueller made his case came on August 7 when Greg Andres objected to a line of Kevin Downing’s cross-examination of Rick Gates. 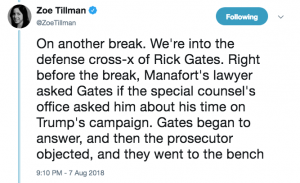 The lawyers went into a sidebar with Judge Ellis. According to a successful prosecution motion to seal that part of the sidebar, the two sides argued about details of Mueller’s investigation.

On August 7, 2018, the Court held a sidebar conference to address a line of questioning pursued by the defense during their cross-examination of witness Richard Gates. During the sidebar conference, substantive evidence pertaining to an ongoing investigation was revealed.

Ultimately, Ellis ruled that Manafort’s team could not pursue that line of questioning. I believe that objection is what led to Manafort’s plea deal today, and with it, likely the final bits to the key conspiracy case against Trump and his spawn.

I say that for the following reasons.

Start with Manafort’s plea deal. When I was thinking of Mueller’s leverage the other day, I imagined Manafort might plead to the charges he did today, but that Mueller would also bracket off some of Manafort’s forfeitures — probably the $16 million that the holdout juror saved Manafort in the EDVA case. That didn’t happen — Mueller dumped the EDVA forfeiture into this deal, so that Manafort will lose all of his thus far identified ill-gotten gains (he’s apparently swapping his Trump Tower apartment for one of the financial accounts, which means that the US government will soon own a Trump Tower property it has unlimited discretion to decide what to do with).

And unless he gets a downward departure for significant cooperation, he’ll do ten years. Under some scenarios, that’s what he would have gotten had he gone to trial in DC and lost. So aside from saving him from a second (and possibly third, if the government pursued the 10 hung charges in EDVA) trial, Manafort got very little that we can see in his plea — just the legal fees associated with the trial(s), while losing the forfeiture he had won by going to trial in EDVA. And for that very little, he kisses away all hope he’ll get a pardon, as well as the (admittedly slim) chance that he might not be found guilty in DC. He also forgoes any appeals and any profits off telling his story. He basically commits to going to prison and coming out an old man to a vastly diminished fortune.

The possible plea benefits we don’t know about

That says the reasons behind Manafort’s decision to accept this plea are things we can’t see but he can.

There are two related possibilities: First, that Manafort came to the conclusion that he’d never get the pardon he had been working towards. That might stem from justified distrust that Trump will ever keep his word, but I doubt it. A pardon was always Manafort’s best way out, and up to a point, it made sense for him to take his chances with Trump.

Which suggests that, for some reason, Manafort came to believe Trump wouldn’t be able to pardon him, probably because he came to understand it would be politically impossible or legally improbable.

Couple that with the other thing that might convince Manafort he’d be better off taking this plea now than continuing to fight his charges: that he knew the next thing he was going to be charged with would be far worse. Just as one example, I’ve suggested that once you’re working for the government of Ukraine (as Manafort was, in the charges settled today) or the government of Russia (as might be established if you showed Konstantin Kilimnik is a Russian intelligence officer, as Mueller has already alleged), very little separates a FARA charge (what he pled to today) from a 18 USC 951 charge, spying. It’s a lot harder to pardon someone for spying than to pardon him for obstruction and financial crimes.

It’s also possible that Manafort came to understand the scope of the conspiracy prosecutors are now pursuing. If he knew they already had the evidence to charge Trump as a co-conspirator in that conspiracy, it would also make it a lot harder for the President to pardon his co-conspirators.

In any case, whatever it is, it’s likely that Manafort had figured out where the prosecutors were heading, and he recognized he was far better off with this painful cooperation deal than being included in the next indictments. Losing his ostrich skin shirt (and five homes and $46 million) and trying to cooperate into a lesser sentence beats facing down a spying charge as part of a conspiracy with both the Russians and a president with severely curtailed pardon abilities, as it turns out.

Which brings me back to that Andres objection on August 7.

Just before the EDVA trial, the government would have had to provide Manafort all their 302s from Rick Gates, so he could use that information to damage Gates’ credibility on the stand. And damage his credibility he did, among other things, by revealing that Gates stole money from the Trump transition.

But in addition to looking at those 302s for impeachment evidence, Manafort also surely looked at it to see what Gates had already provided to Mueller’s prosecutors. I’m guessing (based off what a number of people have said about the role Gates played on the campaign) that Gates got Mueller 90% of the way to a conspiracy involving the President, leaving just some meetings attended only by Manafort and Trump as gaps in the evidentiary record.

And that’s what I believe Downing was trying to do back on August 7: Elicit testimony from Gates that would lay out some of the evidence he had provided Mueller in such a way that didn’t violate the protective order he signed in the DC case (there’s not one in the EDVA case, but the DC one basically covers that, not least because the discovery significantly overlaps). So Downing was trying to put into the public record something about what Gates had told Mueller.

Had he succeeded, perhaps Trump would have recognized the jeopardy that put Manfort (and, presumably, himself) in. Perhaps he would have taken that moment to pardon Manafort, and save him from that jeopardy.

But Greg Andres piped up to object, Mueller’s team won the still sealed sidebar discussion, and Manafort failed to introduce whatever evidence into the public record for Trump and his other co-conspirators to see.

Which left Trump and his legal team, even as Manafort had his first proffer discussion with Mueller on Monday, still claiming that Manafort remained in a Joint Defense Agreement four days later, apparently blissfully unaware that Manafort had seen enough to decide it was time to flip.

Downing’s ploy probably wouldn’t have worked anyway. Pardoning Manafort might have helped Manafort, but if Mueller got 90% of the way to the conspiracy with the witnesses he has (including Sam Patten, whose plea surely contributed to Manafort’s certainty he was fucked going forward), then it wouldn’t have helped Trump and probably would have gotten us closer to when Republicans realize Trump has become an anvil rather than an electoral plus.

But I suspect that was the moment when Manafort’s cooperation, with whatever last little bits implicating Trump, became inevitable.