Can Senator Feinstein Block The Appointment of Rachel Mitchell?

As you know by now, Maricopa County (Arizona) sex crimes unit chief Rachel Mitchell has been deemed by Chuck Grassley and the Senate Judiciary Republicans as their front person to examine Dr. Christine Blasey Ford. From NBC News:

The woman chosen by Senate Judiciary Committee Republicans to question Supreme Court nominee Brett Kavanaugh’s accuser will be in an unusual position when she goes face-to-face with Christine Blasey Ford on Thursday.

Senate Judiciary Committee Chairman Chuck Grassley announced Tuesday that he hired Rachel Mitchell, an outside attorney to question Kavanaugh and Ford, on behalf of the 11 male Republicans on the committee — despite Ford’s wishes to be questioned by the senators themselves about her accusation that Kavanaugh sexually assaulted her when the two were teenagers.

So, the eleven old white men of the SJC want a female stand in to make their evisceration and shining on of putative kidnapping, sexual assault and attempted rape victim Dr. Ford. Because the optics the GOP men, and men are the only sex that has ever served for Republicans on SJC, looked too ugly for even them.

But is this unprecedented move, clearly designed with public optics and maximal humiliation of Dr. Ford even appropriate? Maybe not!

Now, I am not a Senate Rules expert, but a comment made me go do a little digging. Here is the text of the the most recent version of the United States Senate Standing Rules, Orders, Laws, And Resolutions. Here, specifically, is the section, contained in Chapter 43 thereof, in §4301(i)(3) relating to committee retention of consultants:

So, Senator Feinstein, is this indeed the case? If so, why would you assent to appointment of a prosecutorial thug like Rachel Mitchell to examine the putative victim here, Dr. Ford?

Rachel Mitchell is currently head of the Sex Crimes Unit in the Maricopa County Attorney’s Office (MCAO). She has served under three heads of the MCAO, but she was elevated to her current position because she was an extremist who fit the desired bill by the notorious former MCAO head, Andrew Thomas. As you may recall, Andy Thomas not only had to leave the MCAO in disgrace, but subsequently was disbarred for his zealotry. And that kind of craven zealot is exactly who Rachel Mitchell identified with and was promoted by back in January of 2005. And is Mitchell always hard on sex criminals? No, in fact her past also includes sweetheart deals to abusive clergy members in politically charged cases.

Rachel Mitchell is one of the worst choices imaginable for the current task. It is a heinous move by Chuck Grassley and a direct and complete screw you to Dr. Ford and sexual abuse and rape victims across the United States and world.

And the “screw you” to victims is especially salient with the existence of additional putative victims of Brett Kavanaugh’s drunken debauchery. Not only is there Debbie Ramirez, who did not seek to come forward, but was located because friends and classmates of hers and Kavanaugh, while Kavanaugh was at Yale, started recalling her victimization and talking about it. Jane Mayer has more on that, not to mention her and Ronan Farrow’s original reporting on Ramirez.

And, just as of an hour or two ago, yet another troubling story of Brett Kavanaugh’s misogyny and conduct has been made public by her lawyer Michael Avenatti. Julie Swetnick has issued a sworn affidavit that is chilling. Swetnick is a A 1980 graduate of Gaithersburg High School in Gaithersburg, Maryland, and has has held multiple security clearances for work done at the Treasury Department, U.S. Mint, IRS, State Department and Justice Department. In short, she is a more than credible person who has put her statement under oath and penalty of perjury.

Here is her affidavit, and it is chilling. It describes what now seems obvious, Brett Kavanaugh and his friend Mark Judge were part of a group of a private boys school wilding gang that drank to excess regularly mistreated women. Judge and Kavanaugh were “joined at the hip” according to Swetnick. She further states: 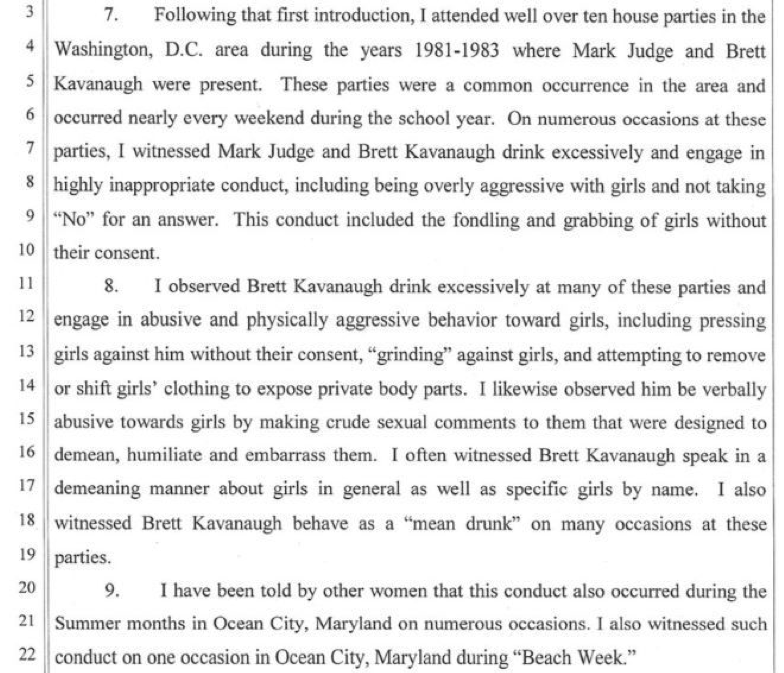 There is more, much more, including descriptions of girls, including Ms. Swetnick herself, being knocked out with spiked punch and gang raped.

And that is where we find ourselves today. It appears that Senator Feinstein can put the kibosh on the craven hiring of a zealot prosecutorial thug like Rachel Mitchell and, further, can with the help of any and all Republican Senators of conscience, slow down this train wreck and investigate the claims and give a real hearing. That means someone among Jeff Flake, Lisa Murlowski, Susan Collins, or another, needs to step up and do the right thing. Will they? Will Senator Feinstein?

Within the last minute, Senator Feinstein has issued the following statement:

Washington—Following the release of a sworn affidavit from Julie Swetnick detailing new allegations of sexual assault by Brett Kavanaugh, all 10 Democratic members of the Senate Judiciary Committee today urged President Trump to immediately withdraw the nomination or order an FBI investigation into all allegations.

The senators wrote: “We are writing to request that you immediately withdraw the nomination of Brett Kavanaugh to be an Associate Justice on the Supreme Court or direct the FBI to re-open its background investigation and thoroughly examine the multiple allegations of sexual assault.

“Judge Kavanaugh is being considered for a promotion. He is asking for a lifetime appointment to the nation’s highest court where he will have the opportunity to rule on matters that will impact Americans for decades. The standard of character and fitness for a position on the nation’s highest court must be higher than this. Judge Kavanaugh has staunchly declared his respect for women and issued blanket denials of any possible misconduct, but those declarations are in serious doubt.”

That is a nice statement, but there appears to be so much more that Senator Feinstein can do Jeff Flake just took to the Senate Floor and, despite some words of empathy, wholeheartedly accepted that tomorrow’s sham hearing in SJC is all that there will ever be. While Flake appeared close to tears, he, as usual, said and intends to do nothing admirable and/or heroic.

It is a sad show we are watching. The hallowed halls of the Supreme Court deserve better, and so too do the American people.

Three Things: CRC—What? An Indictment, Plus Shut Downs Ahead The Two Legitimacy Problems with the Nghia Pho Sentence