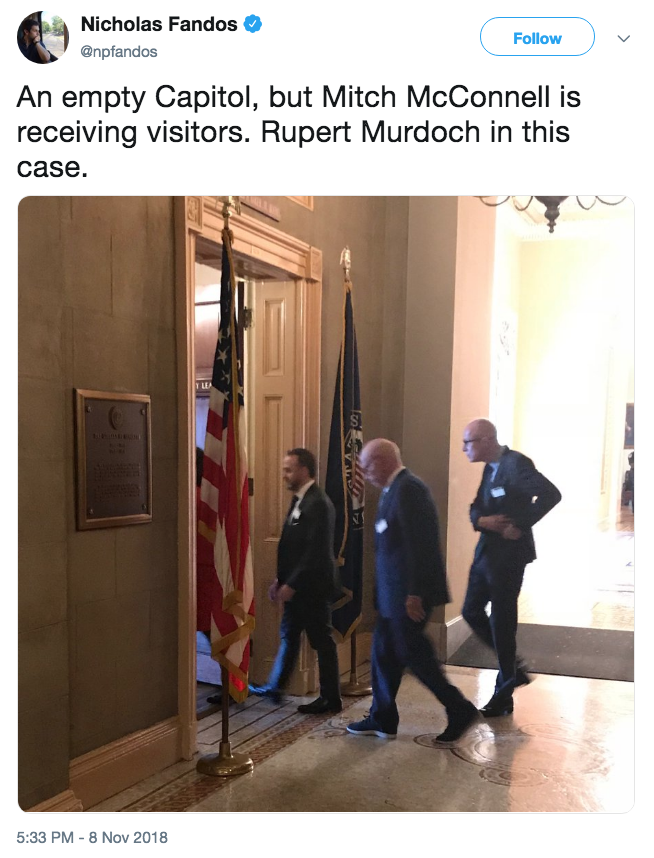 I want to look back at something that has been puzzling me: a Wall Street Journal editorial issued by the end of the day Wednesday arguing that Mueller should not be fired. The next day, Rupert Murdoch paid Mitch McConnell a personal visit on the Hill. 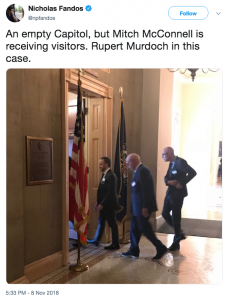 While not as shrill or fact-free as its columnist, Kim Strassel, the WSJ editorial page has been steadily critical of the Mueller investigation, dismissing any possibility it will identify “collusion” and repeating GOP claims that it as sprawled beyond Mueller’s original remit (as well as parroting GOP claims that the FBI framed the Trump campaign). A column on the Paul Manafort plea deal, for example, warned that leaks from the investigation (which have never happened) would undermine public confidence in the investigation.

Leaks or other news about his investigation will undermine public confidence in a probe that has already wandered far from its original Russia remit and has now lasted 16 months without a resolution.

So it’s not like WSJ has been friendly to the Mueller investigation.

That said, their columns on the Mueller investigation as frequently criticize Trump’s incompetence in dealing with it and DOJ. That sentiment shows up in the two most relevant recent editorial columns on the investigation. This column from late August argues that Trump’s attacks on Jeff Sessions put Republican majorities at risk in November, which would lead to impeachment.

We will point out that Mr. Trump’s attacks on his own Attorney General this week are wrong and politically counterproductive.

The President is still furious that Mr. Sessions recused himself from the Russia probe, which has since become the sprawling Robert Mueller investigation that threatens his Presidency. But railing against Mr. Sessions can’t change that, and it gives the appearance of trying to politicize the department.

The biggest political threat to Mr. Trump is a Democratic election victory in November, which will trigger a drive for impeachment. Mr. Trump isn’t going to persuade anyone to vote for Republicans by railing against a Republican Attorney General he selected.

And this September column about the possibility of firing Rosenstein emphasizes the impact that would have on Republican majorities.

The immediate battle now is over the midterm election and whether Mr. Trump can stay in office as the impeachment assault begins from Nancy Pelosi’s Democrats. Mr. Trump can make personnel changes after the midterms if Republicans still hold the Senate and he can get someone confirmed.

Murdoch’s American flagship paper doesn’t like the Mueller investigation. But that has as much to do with the ways it leads Trump to do stupid things that imperil Republican rule as that it poses a risk for Trump personally.

With that as background, consider the column. It starts by complaining (again) about how badly Trump treated Sessions.

Mr. Sessions deserved better than the public humiliations dealt by President Trump. As a Senator from Alabama, Jeff Sessions was the first Washington figure of any stature to embrace Mr. Trump’s candidacy. Mr. Trump wants loyalty up but not down.

It then describes the appointment of Matt Whitaker without comment or judgment.

Sessions’ temporary successor will be the AG’s chief of staff, Matthew Whitaker, who presumably will hold the job until a successor is nominated.

Most of the column argues for a solid Attorney General replacement. The WSJ seems to be complaining — as they did in some of their other editorials — that the White House should exercise more influence over DOJ. They do want someone respectable as Attorney General, however.

It is important that the White House get this one right.

The Attorney General shouldn’t fire Mr. Mueller, as the President essentially said himself at his Wednesday news conference. Mr. Trump needs an individual of stature and judgment who will have the trust of the department’s lawyers, who is capable of independence, but who also understands that the Justice Department is part of the executive branch and not a law unto itself.

But the WSJ, with as little comment as it makes about Whitaker, also states clearly that any new Attorney General shouldn’t fire Mueller and claims Trump himself has agreed, probably a reference to this answer from Trump at the press conference that day.

Q    Thank you, Mr. President.  Going back to the Russia investigation and the potential investigations from the now- Democratic majority in Congress, some say that you could stop all this by declassifying —

THE PRESIDENT:  I could.  I could fire everybody right now.  But I don’t want to stop it, because politically, I don’t like stopping it.  It’s a disgrace.  It should have never been started because there was no crime.  It is — everybody has conflicts.  They all have conflicts over there that are beyond anything that anybody has ever seen in terms of conflicts — from the fact that people ask for jobs; from the fact that they have very good friends on the other side, like really good friends, like Comey — who, by the way, lied and leaked, and also leaked classified information.  Nothing happened there.  It might, perhaps.  Maybe something is happening that I don’t know about.

I stay away from it.  But do you know what I do?  I let it just go on.  They’re wasting a lot of money, but I let it go on because I don’t want to do that.

The day after the election, Trump took a rash step to end the Mueller investigation by firing Sessions and hiring Whitaker. And WSJ almost immediately responded by warning Trump not to do any further damage to the party with his impulsive efforts to undermine Mueller.