Yesterday, I argued that the structure of the addendum describing Flynn’s cooperation looks like this.

Between the three investigations, Flynn sat for 19 interviews with prosecutors.

Here’s the structure of how the body of the cooperation section describes the three investigations:

i) Interactions between Transition Team and Russia (12 lines, just one or two sentences redacted)

On Twitter, Elizabeth de la Vega argued that the ordering of the addendum doesn’t necessarily mean Category A is any more important than Mueller’s investigation, but that Category C was instead something under Mueller’s supervision. 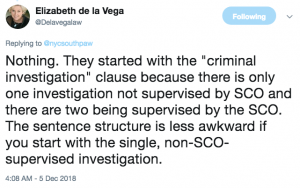 That would mean the structure of the addendum looks like this:

i) Interactions between Transition Team and Russia (12 lines, just one or two sentences redacted)

ii)Mueller investigation into something else:

iii) Mueller investigation into something else:

The description of SCO’s investigation covering “a range of issues” would be consistent with more than two topics.

If that’s right, we might learn the subject of that B iii cooperation by looking at more recent descriptions of the scope of Mueller’s investigation that show up in Jerome Corsi’s draft statement of the offense. As that describes, one of the things Mueller’s office told Corsi they were investigating pertained to any ties between Trump’s campaign, the Russian government, and WikiLeaks.

the nature of any connections between individuals associated with the U.S. presidential campaign of Donald J. Trump (“Trump Campaign”) and the Russian government or Organization 1.

That roughly correlates to the unredacted description of the parts of Mueller’s investigation in the addendum (though Wikileaks got added somewhere along the way).

the Special Counsel’s Office’s (“SCO”) investigation concerning any links or coordination between the Russian government and individuals associated with the campaign of President Donald J. Trump.

But there were two other categories Mueller was investigating by September 6 when they interviewed Corsi: GRU’s theft of the Democrats’ emails, and GRU’s provision of them to WikiLeaks.

the theft of campaign-related emails and other documents by the Russian government’s Main Intelligence Directorate of the General Staff (“GRU”);

the GRU’s provision of certain of those documents to an organization (“Organization 1”) for public release in order to expand the GRU’s interference in the 2016 U.S. presidential election campaign;

Even if one of those two categories describes the area on which Flynn provided cooperation (it’s possible, after all, that these are just the aspects of the Mueller scope that were pertinent to Corsi’s testimony, and there are other categories, like the Middle Eastern graft, that have also been included), it doesn’t necessarily tell us anything. Though — particularly given Corsi’s own ties to the Peter Smith effort — that could be one possible area of cooperation.

Still, I agree her reading may be the correct one (which would also explain why there’s not an introductory paragraph for what I had labeled Category C).

Update: In this post I lay out that we don’t yet know what extradition expert and Arabic speaker Zainab Ahmad has been working on. She has only shown up in Flynn’s docket thus far. She would be a likely candidate to oversee an investigation into the Middle Eastern graft that Flynn was involved with (in which the Seychelles meeting is key). So it may be that B(i) is the transition, B(ii) is the Middle Eastern graft, and B(iii) is another part of the investigation.