Will the Press Recognize They Also Deserve a Scolding for Parroting Eric Dubelier’s Nude Selfie Stunt? 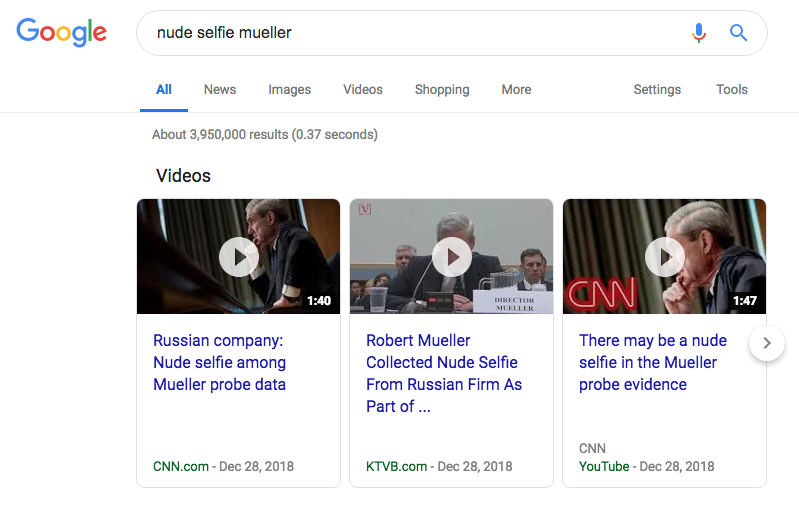 According to Google, there are almost 4 million results for a search on “nude selfie Mueller.” All the top results report on a recent filing from Concord Management objecting to Robert Mueller’s request to submit an ex parte filing explaining why Concord should not be able to share the unclassified but sensitive information obtained in discovery with their boss, Yevgeniy Prigozhin. None of the reports I read considered why and how Mueller’s team would have obtained a nude selfie along with the rest of the vast amounts of social media data it obtained as part of its effort to investigate how trolls paid by Prigozhin operated (one explanation might be that Prigozhin employees sent a nude selfie of themselves via a US-based provider which then got turned over as part of a content request, which contributed to the process of identifying the employees).

In other words, rather than reporting on the mention of the nude selfie as part of covering a legal case, the press instead treated it largely as Concord lawyer Eric Dubelier presumably intended, as a means of making and calling attention to a legally frivolous but politically damning insinuation about Mueller’s investigation. Tellingly, the coverage of the nude selfie claim came only after Dubelier included it in the short response filing rather than the legally more interesting initial request to amend the protective order, which complained that Mueller had turned over “irrelevant data ranging from promotional emails for airlines to personal correspondence, even including personal naked selfie photographs” (which also provides context that might explain why the selfie(s) was discoverable).

All that is useful background, in my opinion, to reports from the hearing that Judge Dabney Friedrich scheduled for today on Friday, before she permitted Mueller to submit a related filing under seal today.

By all appearances, Friedrich brought Concord’s lawyers in (when effectively all she did was schedule a follow-up hearing for March and — apparently — review Mueller’s claims about grand jury proceedings separately) to yell at them for their trollish filings.

A stern-faced Friedrich, the newest of President Donald Trump’s three appointees to the district court in Washington, made clear Monday that she was not amused by what she called the “clever quotes.” She also chastised Dubelier for ad hominem attacks on Mueller’s attorneys and other prosecutors in the case.

“I found your recent filings, in particular your reply brief filed Friday, unprofessional, inappropriate and ineffective,” the judge said. She suggested the submissions were an effort to bully her into granting pending defense motions to give the owners and officers of Concord greater access to materials Mueller’s office has turned over to permit the defense to prepare for trial.

Here’s the filing from Friday that appears to have caused her to finally lose patience with Dubelier’s stunts.

The issues presented by the Concord case — particularly the question about whether Prigozhin, who made himself a Director after Concord got indicted (a parallel move to one he appears to have made to set up a Facebook lawsuit), can obtain discovery without showing up in the US to get it — are legally interesting and potentially important as precedents.

But even the legal press that knows better — and especially the political journalists covering the Mueller investigation as part of their White House coverage — are playing willing tools for Dubelier’s trolling.

It Is False and Defamatory to Accuse WikiLeaks of a Bunch of Things that Aren’t... Robert Mueller Finally Found a Way to Get Paul Manafort to Keep a Secret