This is more than the usual caveat asking readers to note the byline on this post. I’m not the expert at this site on the investigations by Special Counsel’s Office or any other law enforcement body — for that see Marcy’s or bmaz’s posts and comments.

However I spend a lot of time on information technology, which is how I ended up reading a report on internet-mediated information warfare.

Last year the Senate Select Committee on Intelligence held a hearing about Foreign Influence on Social Media. One of the commissioned and invited research organizations was New Knowledge (NK), a cybersecurity/information integrity consultancy. NK’s director of research delivered prepared remarks and a whitepaper providing an overview of Russia’s influence operations and information warfare program.

The paper is a peppy read; it will little surprise those who have followed the Trump-Russia investigation and the role social media played in the 2016 election. But there are still bits which are intriguing — more so months after the paper was first delivered,  in light of long-time ratfucker Roger Stone’s indictment this past week.

Note these two excerpts from the report: 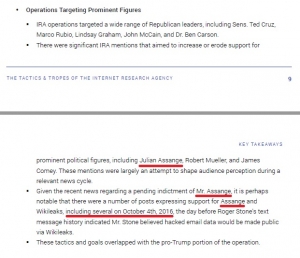 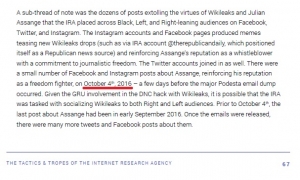 There wasn’t a link in the indictment last year of the Russian Internet Research Agency personnel with Stone’s indictment. The IRA charges don’t overlap with Stone’s at all (count numbers from indictments in paren.).

But Stone’s indictment reveals an interesting overlap of threads between Stone’s efforts on behalf of the Trump campaign and the information warfare operation the IRA conducted in 2016. 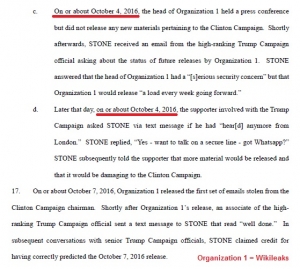 Why was the IRA propelling content to fluff Assange’s credibility in the days before the release of the hacked emails Stone was trying to manage? This is a rather odd service to offer as a tenth anniversary gift to a so-called journalism outlet which should be able to point to its achievements on its own.

The IRA wasn’t alone in its Assange cred-fluffing. What a coincidence the UK tabloid DailyMail also touted Assange’s ability to affect Clinton’s campaign with a release of hacked emails — and at nearly the same time the IRA was pumping up Assange’s image. 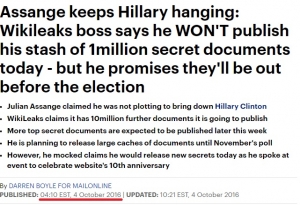 How odd this DailyMail piece was pegged to Wikileaks’ anniversary, but the headline on the article and subhead treat the anniversary as an afterthought compared to the hacked emails and their effect on the Clinton campaign.

It doesn’t look like social media alone manipulated public perception, or that manipulation was confined to U.S. media.

Perhaps these two threads — the IRA’s influence operation/information warfare and Stone’s hacked email ratfucking — weren’t directed by a common entity. The public may not know depending on the course of SCO’s criminal and counterintelligence investigations and what information is released. But they certainly sewed toward the same outcome.