[NB: Not Marcy, check the byline, thanks! /~Rayne] 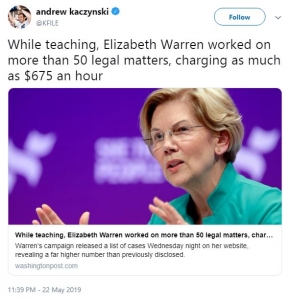 Wipe the shocked look off your face, Andrew. Believe it or not, secondary education instructors often have day jobs, and professionals often have instruction gigs.

Those day jobs ensure they are more qualified to speak about their field than instructors who teach on the subject directly out of school.

Best classes I ever took were taught by adjunct professors because they had real life experience to use as examples. (My favorite was my business ethics class taught by a local judge.)

This isn’t restricted to the law, either; pick a field from humanities to STEM and you’ll find instructors who are working in their profession while teaching.

But Andrew Kaczynski isn’t the only problem. The article he retweeted has a problem smack in the middle of it which gives me pause — it’s so bad I have to wonder how much of the rest of this report by Washington Post journalists Elise Viebeck and Annie Linskey may need vetting.

One of her most controversial clients was Dow Chemical, which she advised in the mid-1990s. A subsidiary that manufactured silicone gel breast implants faced hundreds of thousands of claims from women who said their implants caused health problems. Dow Chemical denied that it played a role in designing or making the implants and sought to avoid liability as its subsidiary, Dow Corning, declared bankruptcy.

And I didn’t have access to resources like the Washington Post’s team — cripes, WaPo probably reported on this case. It’s probably in their archives. What else in this article picking through Elizabeth Warren’s work history is just as thinly researched?

We have a malignant narcissistic lifelong scofflaw in office because the media was unwilling to do adequate research into his background before 2016. They focused to excess on the leading female candidate who had already been heavily researched during her tenure as First Lady, junior senator from New York, and Secretary of State.

Now we see slapdash research pushed misogynistically, to the detriment of a candidate who has also served in public office and proven her work history has informed her work as a senator and her policy proposals.

Imagine it: a corporate lawyer who, after working as a lawyer for corporate clients, decides they need more oversight like the Consumer Financial Protection Bureau and corporations’ owners need to pay more taxes.

But the media wants you to take away from their coverage that she’s been paid by corporations you may not like while teaching at the same time.

Wait until they figure out she’s a mother, too. OMFG!!1! What kind of being can possibly do all that — parent two kids, teach, and bill out at $675 an hour?

Give me a fucking break.

Reporters: Stop this goddamned double standard immediately. Do a better job of reporting, stay focused on what’s relevant and quit making sensation out of nothing.

Readers: Be more skeptical of everything you read, and when you read, do so carefully. Don’t rely on stupid white men’s tweets to tell you the truth. Demand better quality reporting.

Did Some Republican in Congress Leak Details of the Mueller Report to Roger... The Charges Against Julian Assange