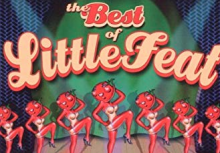 So, in a bit of frivolity, Pete T and Jim White tried to get me to feature the Mike Huckabee Band for Trash Talk. That is just not going to happen. And, yes, there may have been a bit of extra attention paid to Little Feat lately. Sorry!

I set out to publish the Trash about 4am here, but things got in the way, namely rebuilding of an outdoor BBQ and an indoor fireplace. Mrs. bmaz thought those more pressing. What can you do? So, here is a little Little Feat, and some placeholders for if I, Marcy or Jim feeds more content into this late post.

Alabama hosting LSU is basically everything in college football today, with a shout out to Penn State at Minnesota, Iowa at Wisconsin (doubt the Badgers will blow this at Canp Randall). How in the world 9-0 Clemson was not in the BCS top four is a crime, given their record in the final football four the last four years. Stop being stupid NCAA.

In the Pros, the Rayduhs already beat the Bolts in a game the Bolts should have won. Detroit at Bears is a yawner. Bills at Brownies might be interesting. Jeebus, the Jets Jets Jets and Gents are actually going to play each other in their home stadium? Why? Rams at Steelers could be interesting. Steelers not the same without Big Ben, but they are not dead yet either. They may well beat the Rams in this one. The SNF game of Vikings and Boys could be fairly decent. And the MNF game of Squawks at Niners looks downright fantastic. I’ll take the Niners at home here, but not against the Squawks at home at the end of the year.