Last year, as Mueller was managing the failed Jerome Corsi cooperation deal, I did a series of posts suggesting that Corsi and Stone seemed to have gotten advanced information about the John Podesta email dump. I argued that, in part, because the two started crafting an elaborate Matryoshka cover-up by the end of August to excuse away Stone’s “time in the barrel tweet.” More importantly, Corsi wrote a piece picking up what the two men had been plotting in August on October 6, seemingly anticipating John Podesta documents that would only be dumped on October 11. In other words, Corsi and Stone seemed to know by mid-August what WikiLeaks would drop in October.

I posted the first of those posts on October 22.

Three days later, Mueller’s team interviewed Rick Gates (PDF 39). According to the headings in the interview, which were dates, the interview traced the key milestones of the WikiLeaks dump:

Much of the content below that last redacted heading is redacted, but it’s clear the section as a whole relates to the two Corsi pieces that bookend my theory that he and Stone got the files ahead of time.

Gates did not recall receiving the aforementioned email.

The FOIAed backup for this interview includes the emails by which the articles were sent. 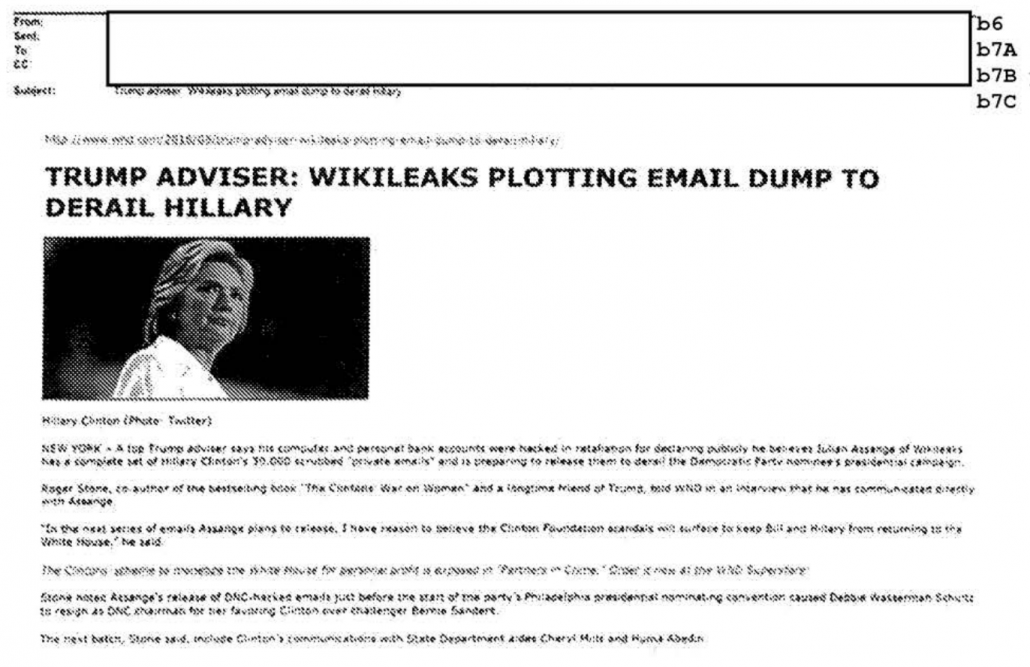 They obscure the date that the first one was sent, though it was posted on August 15; the second, which Corsi published on October 6, got sent 15 hours later, so just before mid-day on October 7. (Steve Bannon’s assistant Alexandra Preate sent Stone a text at 6:30PM telling him “Well done,” presumably for the actual WikiLeaks releases).

But it sure seems like the campaign was in the loop on some of this.

I’m fairly certain none of this will be aired at the Stone trial. The government doesn’t even plan to enter Stone’s “time in a barrel” tweet into evidence and there’s nothing in the draft exhibit list that looks like it could be these emails. Plus, much of their case seems designed not to have to rely on Corsi.

But it sure seems to have been of interest last year.